Odds are not in his favor. 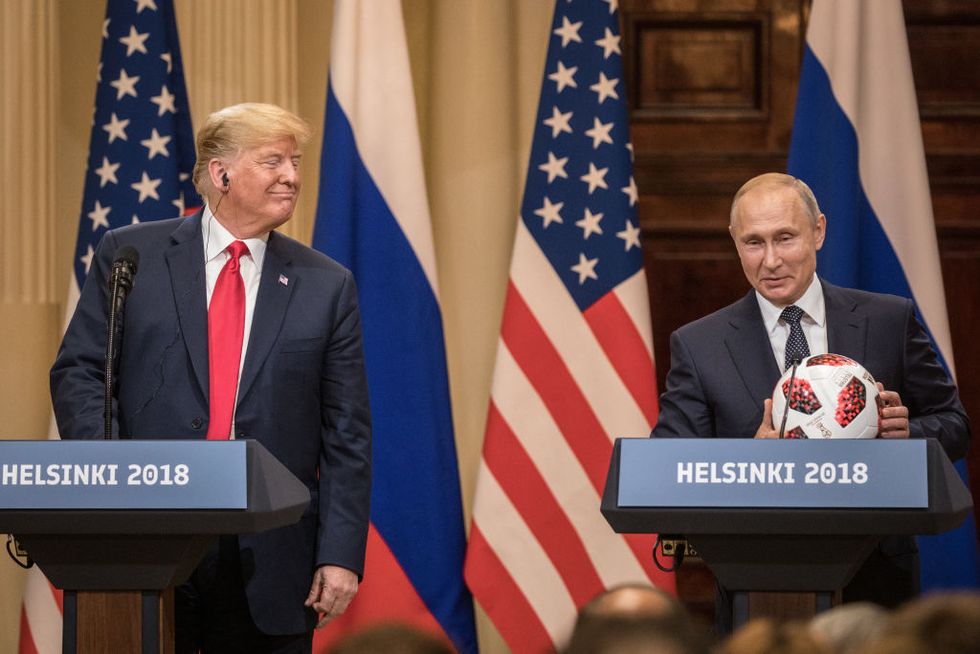 British and Irish punters "are putting up money 2 to 1" on President Donald Trump’s impeachment, according to Lee Price, a spokesman for Paddy Power, a bookmaker that manages betting shops in Britain and Ireland and that runs Ireland’s largest telephone betting service.

“What this whole Moscow gruel has taught us is that the Donald is still the biggest ticket in town — and people love to bet on his downfall,” Price told The Washington Post, noting that the odds that Trump is impeached are now 2 to 1, or 33 percent. That's a notable change from 4 to 1, or 20 percent, on Monday before a news conference after President Trump's summit with Russian President Vladimir Putin, during which he sided with Putin over assessments from the United States intelligence community that Russia interfered in the 2016 presidential election.

“Given the complexity of the impeachment process, that’s an unprecedented price in terms of how short it is,” Price said. “No president in modern history has had such short odds.”

As if to underscore that statement, Price said that bets on when Trump would be impeached have been the most popular since he took office in January 2017.

Since Trump’s inauguration, we’ve had more bets on his impeachment than we’ve had on any Brexit market, any U.K. election market, or any of the other 100 or so specials we have on-site about the president.

Because gambling laws differ between U.S. states, The Washington Post could not offer a "comparable assessment" of odds stateside.

Calls for the president's impeachment have intensified since he sided with Putin.

Yesterday, the president walked back that assertion, saying he had misspoken when he appeared to accept Putin’s denials that Russia interfered.

Trump then claimed that he had intended to say the word “would” instead of “wouldn’t” when he contradicted U.S. intelligence findings, as when he said, “With that being said, all I can do is ask the question. My people came to me, Dan Coats came to me and some others, they said they think it’s Russia. I have President Putin; he just said it’s not Russia. I will say this: I don’t see any reason why it would be.”

“The sentence should have been, ‘I don’t see any reason why it wouldn’t be Russia.’ Sort of a double negative,” Trump told reporters. “So you can put that in, and I think that probably clarifies things pretty good by itself. I have on numerous occasions noted our intelligence findings that Russians attempted to interfere in our elections.”

CNN reports that earlier today, when asked by a reporter whether Russia is still attacking the United States, Trump, "looking directly" at the reporter, replied: "No."

These statements have done nothing to appease the president's critics, and hashtags like #TreasonousTrump and #TreasonSummit persist.

To everyone rebuking Trump or telling him to change course-He can’t. He is a Russian operative.Every single move ha… https://t.co/txLKSzvxdM
— Patricia Arquette (@Patricia Arquette) 1531842515.0

I believe Donald Trump is a traitor to the United States. I’m calling on the House of Representatives to impeach hi… https://t.co/1hJYJceBvG
— Kevin Cook (@Kevin Cook) 1531801190.0

Pressure has mounted on Democrats to push for impeachment proceedings, but Representative Eric Swalwell (D-CA) a member of the House Judiciary Committee, said removing the president from office would be a "premature" effort.

“I think that’s premature at this point — we should do all we can to make sure that he’s held accountable, that we conduct the investigations the Republicans have been unwilling to do.” Swalwell told Hill.TV’s “Rising” on Monday.

"If impeachment is the case, it’s because we found impenetrable evidence that we take to the American people and will be accepted by both Republicans and Democrats,” he added.

Swalwell stressed that Democrats should focus on issues affecting everyday Americans if they wish to stand a chance in November's midterm elections.

If we’re talking about that right now at home, we’re not talking to people about how they can grow their paychecks, how they can expand their healthcare coverage, how they can have careers they can count on and see improvements in the investments we make in their kids. That's what most people care about — it's not impeachment.

Representative Linda Sánchez (D-CA) says that Democrats should not move to impeach the president while Special Counsel Robert Mueller's investigation into Russia's attempts to undermine American democracy is ongoing.

"In order to prosecute a case for impeachment, you have to have the underlying facts," she said at the POLITICO Pro Summit. "We don't know all the facts yet. And until the time that we do, we can't make a decision on whether or not impeachment is warranted."

Sánchez added that using the term “meddling” to describe Russia’s attempts to influence downplays the seriousness of the allegations:

Meddling is a very milquetoast term. Meddling, that sounds like your neighbor who goes and tells gossip. The fact that a foreign government tries to undermine our democracy is something that everybody, regardless of political affiliation, should be clamoring for acknowledgment of.

Meanwhile, Texas Democrat Representative Beto O'Rourke, who is challenging Ted Cruz’s Senate seat, said Trump should be impeachments for the comments he made during Monday's press conference.

Standing on stage in another country with the leader of another country who wants to and has sought to undermine this country, and to side with him over the United States ― if I were asked to vote on this, I would vote to impeach the president,” O’Rourke told The Dallas Morning News.