Donald Trump Suggested That People Look Into Michael Cohen's Father in Law, and Top Democrats Are Warning That Trump May Have Just Committed a Crime 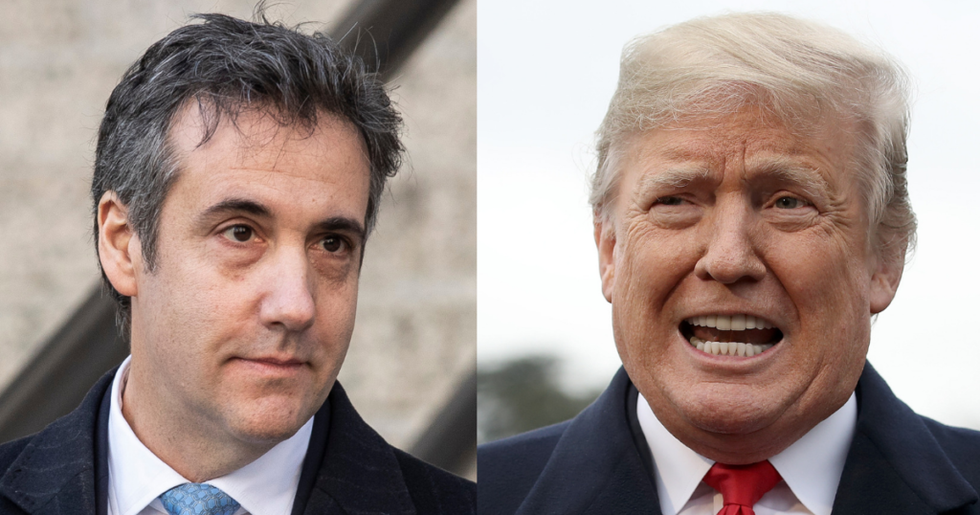 Three top Democrats warned President Donald Trump that any attempts to obstruct and influence witness testimony could be construed as a crime after he accused his former attorney, Michael Cohen, of lying about him to win leniency from federal prosecutors and alleged potential legal problems involving Cohen's father-in-law.

Trump had made the comments during a Fox News interview with network host Jeanine Pirro, claiming that Cohen, who has agreed to testify before Congress next month, had "no information" on him.

“He’s in trouble on some loans and fraud and taxicabs and stuff that I know nothing about,” Trump said. “And in order to get his sentence reduced, he says, I have an idea, I’ll tell — I’ll give you some information on the president.”

Trump then implied authorities should investigate Cohen's father-in-law, whose name he said he did not know, "because that’s the one that people want to look at. That's the money in the family."

“I don’t know, but you’ll find out, and you’ll look into it because nobody knows what’s going on over there," he said when Pirro asked him to elaborate.

"The integrity of our process to serve as an independent check on the Executive Branch must be respected by everyone, including the President. Our nation's laws prohibit efforts to discourage, intimidate, or otherwise pressure a witness not to provide testimony to Congress. The President should make no statement or take any action to obstruct Congress' independent oversight and investigative efforts, including by seeking to discourage any witness from testifying in response to a duly authorized request from Congress."

Others have also chimed in, agreeing that Trump is trying to intimidate Cohen and suggesting he is guilty of a felony under 18 U.S.C. 1512, which outlines consequences for those who tamper with witnesses, victims, and informants.

Did Trump commit a felony when he called into Jeanine Pirro's show to suggest that Fox News (and authorities) look… https://t.co/J7cejVQL2O
— Jennifer Hayden (@Jennifer Hayden) 1547475962.0

Cohen’s father-in-law, Fima Shusterman, pleaded guilty to evading federal reporting requirements for large cash transactions the year before his daughter, Laura, married Cohen. Shusterman and Cohen had been business associates for years and, according to reporter Seth Hettena, who wrote a book examining Trump's connections to Russia, was the first to introduce Cohen to Trump.

Cohen's attorney Lanny Davis said that Trump levels "incessant attacks" against Cohen because Trump views Cohen as the "greatest threat to his presidency."

"This pattern of incessant attacks on my client and his family show what the American people have already witnessed, that Donald Trump sees Michael Cohen, and I would say justifiably, as the greatest threat to his presidency and what could be criminal and impeachable actions," he said.

Giuliani had a flippant reaction when questioned about the decision of convicted former Trump attorney Michael Cohen to testify before Congress on February 7.

Giuliani further came under fire after he suggested that Trump’s legal team should be given the opportunity to “correct” Special Counsel Robert Mueller’s final report before the American people or Congress see it.