In .14 Seconds, Tesla's Giant Battery Pack Showed Why Renewable Energy Is the Future 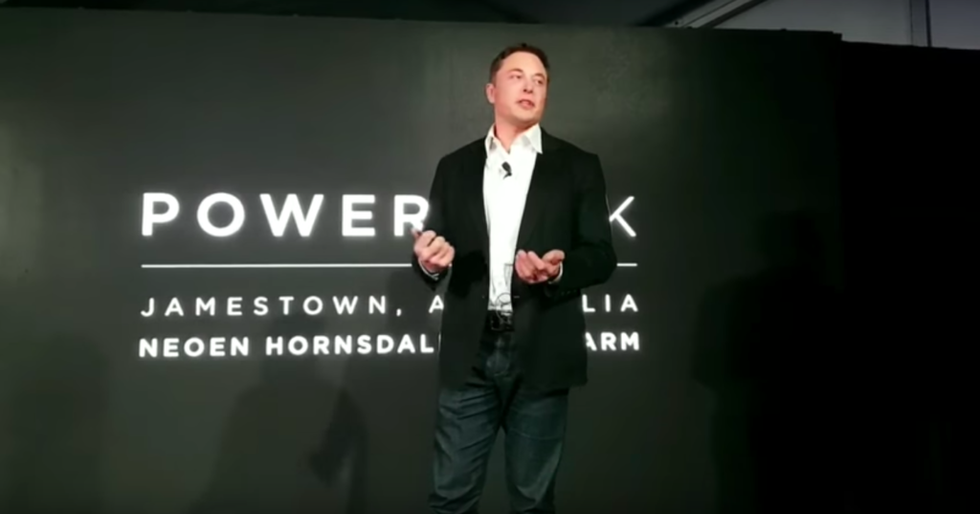 Elon Musk gives a speech at the Powerpack Celebration in South Australia on September 29, 2017. (Screenshot via Youtube)

Riding high after a $50 millionbet by Elon Musk that Tesla would be able to install the world’s largest battery system in South Australia in under 100 days, the massive Powerpack is now proving its worth.

The Loy Yang A 3 coal power plant in Victoria is one of the biggest power plants in Australia. On two different occasions, Loy Yang’s power grid experienced an outage, and both times, Tesla’s Powerpack battery was able to stabilize it within milliseconds, an especially impressive feat given that the coal plant is over 620 miles away.

Musk’s enormous bet stems from a Twitter exchange in March, after Lyndon Rive, Tesla’s Vice President for energy products, bragged that an energy grid-stabilizing Powerpack could be installed in South Australia in under 100 days from signing the installation contract.

Musk noted his company had completed a similar 80MW battery in California in only 90 days, and that Tesla wouldn’t charge the South Australian government if it failed to meet the deadline. Tesla successfully met the goal and was able to claim its installation fee; however, Tesla didn’t actually sign the contract until September 29th when installation on the Powerpack was already halfway completed.

@mcannonbrookes Tesla will get the system installed and working 100 days from contract signature or it is free. That serious enough for you?
— Elon Musk (@Elon Musk) 1489114257.0

Commissioned to help further wean South Australia off of its use of fossil fuels, the Powerpack is intended to cover deficiencies in the grid and emergency outages during the summer, when the wind is at its strongest and blackouts are common.

As the world’s largest lithium-ion battery, the Powerpack receives its electricity from the Hornsdale wind farm in South Australia, and the Australian government has appropriately christened the battery the Hornsdale Power Reserve. The transition to renewables is alreadywell underway in South Australia, as the state closed its last coal plant in May of 2016, and wind and solar currently generate 46% of the electricity consumed.

As December’s intense summer heat caused demand to spike on the 14th, the Loy Yang plant tripped, or temporarily shut off to prevent overheating, at 1:59 AM. Loy Yang’s momentary drop in output cut 560MW from the electrical grid, or enough to power nearly 170,000 homes. Within 0.14 seconds, Tesla’s 100 Megawatt battery kicked on and was able to provide 7.3 megawatts in place of Loy Yang, well before the nearby Gladstone power plant, paid to respond in under six seconds, could supply power. According toRenew Economy, the Powerpack responded without even being asked to. Loy Yang tripped yet again on December 22nd, and the power grid was stabilized in milliseconds by another 16 megawatt injection from Tesla’s battery.

Gladstone is a “peak power plant,” which kicks on to provide backup electricity in case of an outage. Peak plants typically burn their fuel much less efficiently than main plants, and the electricity they provide is more expensive as it is needed only intermittently. The Powerpack has shown that it’s possible to store and transfer renewable energy to where it’s needed most, although the battery’s 100MW capacity means it could never fully take over for a downed plant.

While the Powerpack was never built to cover major fluctuations like the downtime at Loy Yang, it responded automatically. As Quartznotes, the battery’s ability to rapidly respond is a major benefit, but lithium ion batteries lose their charge within week, and the Hornsdale wind farm is a sporadic producer of electricity.

Still, Australia has been eager to shed its image as a heavy polluter, and researchers say that the costs of building and switching peak plants to renewable-powered battery systems could be feasible in Australia by2025. Those predictions are already bearing out, as South Australia’s neighboring state of Victoriarecently announced that they would be building a 20MW Powerpack of their own.

This is good news for Elon Musk, who has consistently preached the use of batteries to close the gap periods when renewable energy sources such as wind or solar can’t produce. With trial installations of Tesla’s solar shinglesramping up and the Powerwall, Tesla’s battery for residences, having sparked a race to bring large home batteries to the mass market, sustainable power might soon be integrated with the electrical grid on a wide scale.