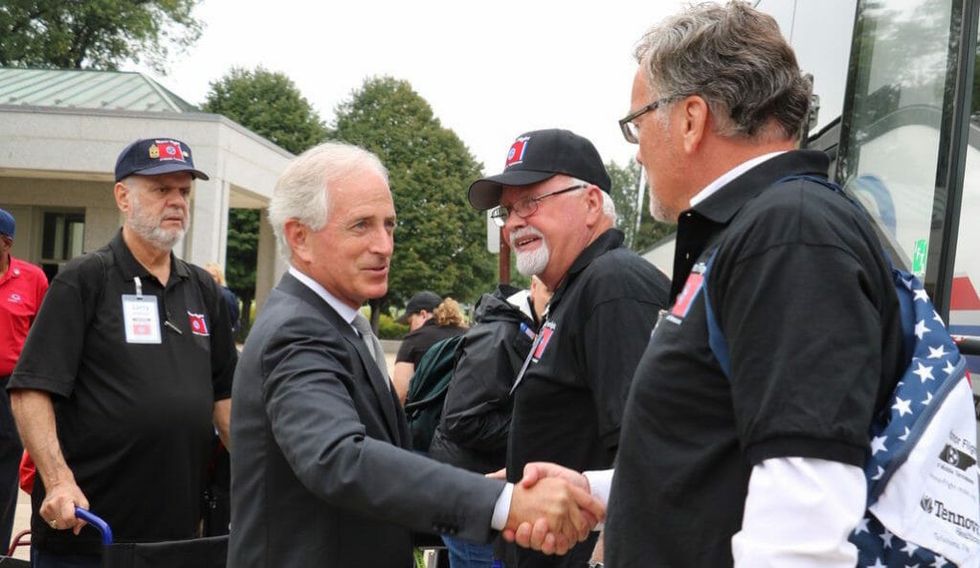 "It is always an honor to welcome Tennessee veterans to Washington, and I was humbled to spend time with these American heroes yesterday." Senator Corker meets with veterans (Photo credit Twitter / Senator Bob Corker)

Senator Bob Corker, the Republican chairman of the Senate Foreign Relations Committee, stated in an interview on Sunday that President Trump risks setting the nation “on the path to World War Three". Treating his office like “a reality show” with reckless threats toward other countries is a clear threat to national security.

It is a harsh rebuke of a Republican president by a member of his own party. But Senator Corker said he was alarmed about a president who acts “like he’s doing The Apprentice or something.”

He concerns me. He would have to concern anyone who cares about our nation.”

The Tennessee veteran Senator also raised concerns about the President's use of Twitter as it relates to foreign policy and international relations. Without specific incidents, he stated President Trump repeatedly undermines diplomacy with his Twitter posts.

“I know he has hurt, in several instances, he’s hurt us as it relates to negotiations that were underway by tweeting things out,” Senator Corker said.

Senator Corker’s comments came on a day of insults passed between the president and the Tennessee senator. It began on Sunday morning when President Trump, posting on Twitter, accused Mr. Corker, in a series of Tweets, of begging for his endorsement and deciding not to run for re-election because he “didn’t have the guts.”

The senator flatly disputed the President's account, saying President Trump had urged him to run again and promised to endorse him if he did. But the exchange highlighted one fact; the senator views President Trump as prone to irresponsible, dangerous outbursts.

And his many Twitter outbursts are a significant problem. According to the senator, President Trump requires a cadre of senior administration officials to protect him from his own impulses.

I know for a fact that every single day at the White House, it’s a situation of trying to contain him.”

As for the President's Tweets, Senator Corker expressed another concern many others have voiced.

I don’t know why the president tweets out things that are not true. You know he does it, everyone knows he does it, but he does.”