Transcript Reveals Why Don Jr. Agreed to Meet With That Russian Lawyer in Trump Tower and It Sure Sounds Like Collusion 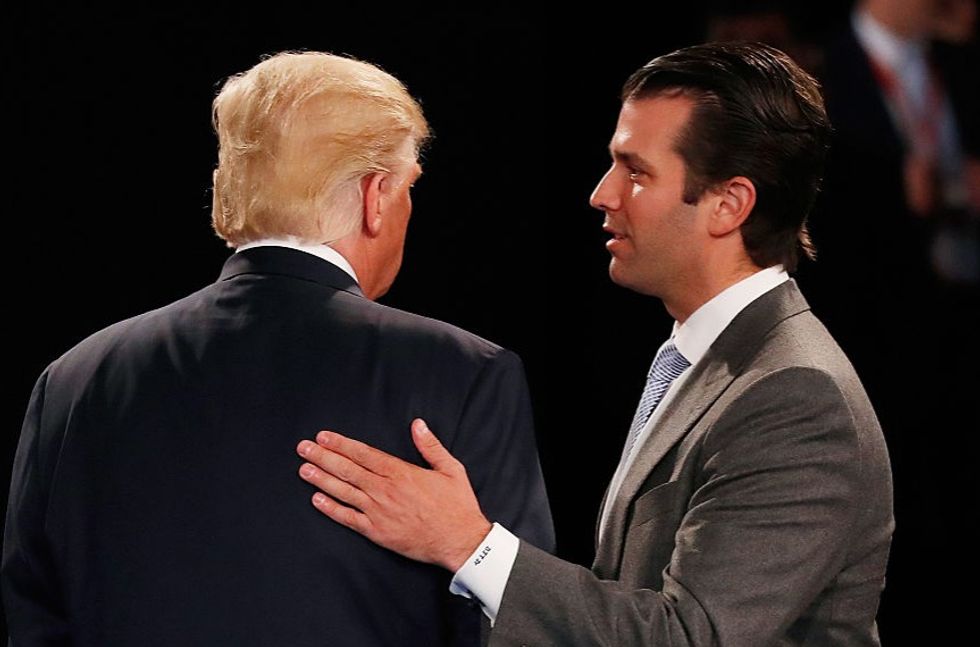 The Senate Judiciary Committee released nearly 2,000 pages of transcripts of interviews they conducted with some of the players in meetings that took place between members of the 2016 campaign for President Donald Trump and Russian representatives.

With so many pages to weed through, the story is continuing to evolve. But so far it is not looking good for Donald Trump Jr.'s reputation and integrity.

It is already known that the junior Donald initially lied about the purpose of his Trump Tower meeting with Russian representatives. At one point he claimed the meeting was about adoption.

But according to his testimony before the senate, he met for one purpose: gather any dirt the Russians could provide on his father's presidential rival, Hillary Clinton. In an excerpt from the transcript, Don Jr. states he was there solely for the purpose of getting information to use against Clinton.

Q. But what is it that specifically you were interested in getting out of that meeting?

Q. Information on Hillary Clinton that came potentially from the Russian government?

A. Again, I had no way of assessing where it came from, but I was willing to listen.

Rob Goldstone, a publicist by trade, was the man who brokered the meeting for Russian real estate investor, Aras Agaralov and his son, musician Emin Agaralov. Goldstone told the senate he did not think the meeting was a good idea and advised the Russians against it.

I believed it was a bad idea and that we shouldn’t do it. And I gave the reason for that being that I am a music publicist. Politics, I knew nothing about. And I said, neither do you and neither does your father. And the answer was simply, I'm only asking you to get a meeting.”

Goldstone sent the email that set up the meeting after speaking with Emin and being told that Aras Agalarov met with a “well-connected Russian attorney” that morning who had potentially damaging information about Hillary Clinton.

That attorney is believed to be Russian government informant Natalia Veselnitskaya. Veselnitskaya made the presentation at the resulting meeting with the eldest son of the president.

Goldstone said he sent the email to Trump Jr rather than the presidential candidate directly because,

when Emin said , contact the Trumps, I wasn’t sure if the right way to do it would’ve been through [Trump’s assistant] Rhona Graff or through Don Jr., and I made the call that he was the lesser level, and that I would run this past him first, rather than send it down a more official routing.”

From the transcript of his testimony, Goldstone states he was at the meeting for a "somking gun" to use against Hillary Clinton.

Q. This morning you had testified about the June 9th meeting and your actual participation during the meeting. You said that you were awaiting a smoking gun at the meeting, and you were waiting to see if there were to be any reaction to that?

A. Yes, the smoking gun. I mean, I just sent somebody an email that says I'm setting up a meeting for someone that is going to bring you damaging information about somebody who was running to become the President of the United States. I thought that was worthy of the words smoking gun, yes.

Q. So the smoking gun refers to damaging information?

A. Well, yes. I mean, that's the basis on which I requested the meeting. So I thought there might be some -- smoking gun might b e a bit of a ridiculous word to use, but what I was saying was, I expected there to be something that would make people react, and, therefore, there was a reason to have made this request.

Q. So your expectation of going into the meeting was that there would be a smoking gun?

A. Based on what I had requested, I believed there would be some "damaging information," which is why I had been asked to set up the meeting in the first place

Q. Throughout the course of the entire meeting, did you ever hear any damaging information?

A. Well, again, I don't know what would be deemed damaging, but I didn't hear anything that I would deem to be damaging. And I didn’t see anybody react in a way that I believed people would react if they heard damaging information.

As analyses of the transcripts continue, it is hard to say what potential fallout this could have for the president or his son. Only time will tell.