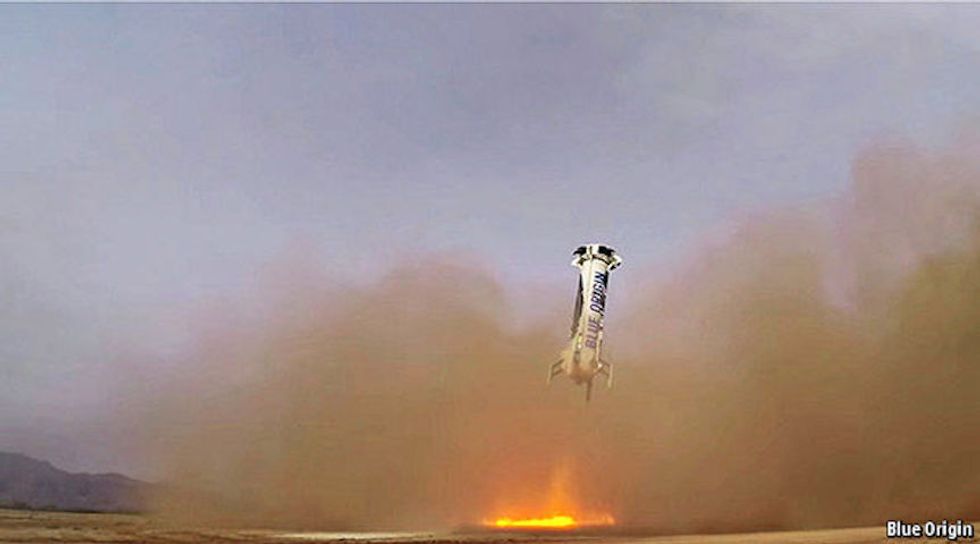 [DIGEST: The Economist; TECHNEWSWORLD; The Verge]

The tech world is all abuzz with the latest from Jeff Bezos’ rocketry firm, Blue Origin. Last week, the firm successfully launched and landed its “New Shepherd” spacecraft.

Some say the achievement secured Blue Origin’s place in history—ahead of Elon Musk’s SpaceX—as the developer of the first reusable vertical rocket. SpaceX has had a few famously fiery hiccups in attempting to land its tall, slender Falcon 9 spacecraft.

Bezos certainly deserves bragging rights, but the direct comparison to SpaceX might be a bit off the mark.

The gateway to commercial spaceflight

The development of reusable rockets is widely seen as the next significant step toward transforming space travel from the exceptional to the everyday. The public has yet to evince much enthusiasm for the project, but the lack of popular excitement could be due, at least in part, to a sense that spaceflight is just too expensive to be commercially viable.

Widespread commercial spaceflight has remained out of reach largely due to its exorbitant cost. After all, rockets don’t come cheap, and most are only designed to go only in one direction: up. After they’ve launched, they tend to break apart as they plummet back down through Earth’s atmosphere--not a terribly practical means of conveyance. As The Economist put it, “[i]t is a bit like blowing up your car after every trip and having to buy a new one.” But, with the ability to reuse rockets, costs become more manageable.

It’s no surprise, then, that Jeff Bezos boasted about Blue Origin’s success on Twitter, saying: “[t]he rarest of beasts - a used rocket. Controlled landing not easy,

What Musk might have been getting at is that SpaceX and Blue Origin are in two entirely different classes in terms of what they’re hoping to achieve.

Essentially, Blue Origin is primarily interested in space tourism of the kind widely publicized by Virgin Galactic’s founder, Sir Richard Branson. Branson espouses a philosophy of “democratizing access to space” by increasing the number of humans to experience spaceflight.  At $250,000 a piece, more people have purchased tickets to ride on Branson’s spacecraft than the total number of human beings that have ever been in space.

Notwithstanding the tragic crash that took the life of Virgin Galactic test pilot, Michael Aylsbury in 2014, the waiting list for a spot on Branson’s rocket is more than seven hundred names long. Admittedly, the crash was a major setback, but only about three percent of Branson’s ticket holders requested a refund; Vanity Fair reported earlier this year that Branson remains undeterred and his space-tourism venture will go forward, if a little later than he’d hoped.

Blue Origin’s New Shepherd rocket is only designed to launch a capsule just beyond the edge of Earth’s atmosphere in order to give (affluent) aspiring astronauts a brief glimpse into the vastness beyond (for about four minutes). Elon Musk, on the other

hand, has loftier goals. SpaceX's “Falcon 9” is designed to carry more weight and to insert its payload into orbit before returning to the ground; this requires a lot more power and, therefore, a different design.

Because their end goals are so different, it follows that the two rockets are designed in very dissimilar ways. At a basic level, Falcon 9’s tall, slender design makes it difficult to land without toppling over.

But New Shepherd, which is shorter and stouter and therefore easier to land, doesn’t have the same kind of engine power as Falcon. So New Shepherd, which reaches heights of about 62 miles above the surface, in a sense falls far short of Falcon 9 which hurtles more than twice that distance.

It’s true that Blue Origin’s successful landing shouldn’t outshine the work being done over at SpaceX. But the landing is certainly a remarkable and historical achievement that has, in all likelihood, brought us one step closer to a commercially viable exploration of the final frontier.