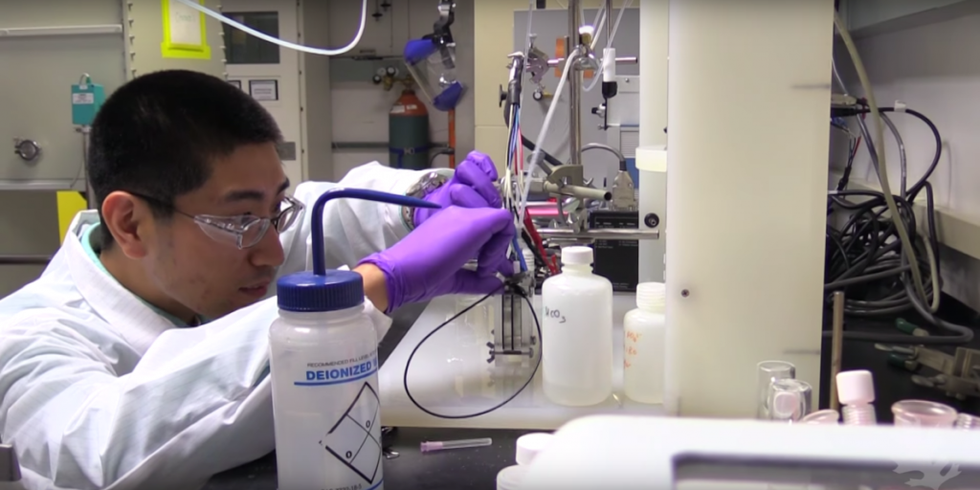 A team of nanotechnology researchers at the Department of Energy’s Oak Ridge National Laboratory in Oak Ridge, Tennessee, were trying to grow catalysts on graphene, a layer of pure carbon, when they unexpectedly found a process that can turn carbon dioxide into pure ethanol.

In chemistry, a catalyst is a substance that increases the rate of a chemical reaction on its own, without being consumed or otherwise altered.

“We discovered somewhat by accident that this material worked,” said team member Adam Rondinone of the process in a press release. “We were trying to study the first step of a proposed reaction when we realized that the catalyst was doing the entire reaction on its own.”

When equipment limitations prevented the team from making graphene, they realized instead they could manufacture the catalysts in a tapered shape, much like a lightning rod or a spike.

“[It] concentrates the electric field right there at the tip,” explains Rondinone in an Oak Ridge Laboratory YouTube video.

The scientists then ran 1.2 volts of electricity—less power than an AA battery––through the copper-coated catalysts, which stand about 50 nanometers high, or approximately 1 millionth of a millimeter, and are submerged in water.

When the researchers bubbled CO2 through the water, they assumed based on prior results that the catalysts would convert the gas into methanol, but were stunned to find the electrochemical process instead produced straight ethanol alcohol.

"We’re taking carbon dioxide, a waste product of combustion, and we’re pushing that combustion reaction backwards with very high selectivity to a useful fuel," said Rondinone. "Ethanol was a surprise––it’s extremely difficult to go straight from carbon dioxide to ethanol with a single catalyst."

Ethanol, itself a viable fuel source, is currently added to gasoline worldwide and can be used in the current vehicle fleet. (In the U.S., gasoline contains 10 percent ethanol; in other countries the percentage is even higher. Gasoline in Brazil, for example,

contains ethanol in concentrations as high as 27 percent.)

Furthermore, the newly discovered process has an efficiency yield ranging from 63 to 70 percent and operates at room temperature, which means it can be switched on and off “with minimal energy penalty,” Rondinone explains. Unlike prior related waste-to-fuel technology that relied on expensive parts or auxiliary technology such as solar power, the Oak Ridge team believes this comparably simple catalyst could easily be scaled up for industrial use.

For many, the discovery of a viable, carbon-neutral waste-to-fuel technology like this couldn’t come a day too soon.

In September, atmospheric carbon dioxide levels exceeded 400 parts per million for the first time in the history of the planet—a development that could well be permanent. For context, many scientists, including Bill McKibben and his 350.org initiative, believe the “safe” level of PPM to be back at 350.

"Right now we’re at 400 ppm, and we’re adding 2 ppm of carbon dioxide to the atmosphere every year," reads McKibben’s initiative. "Unless we are able to rapidly turn that around and return to below 350 ppm this century, we risk triggering tipping points and irreversible impacts that could send climate change spinning truly beyond our control."

One of the main challenges facing the reduction of greenhouse gases is the lack of a fully renewable energy grid—a problem that could well be solved by the Oak Ridge discovery.

"A process like this would allow you to consume extra electricity when it’s available to make and store as ethanol," Rondinone said. "This could help to balance a grid supplied by intermittent renewable sources."