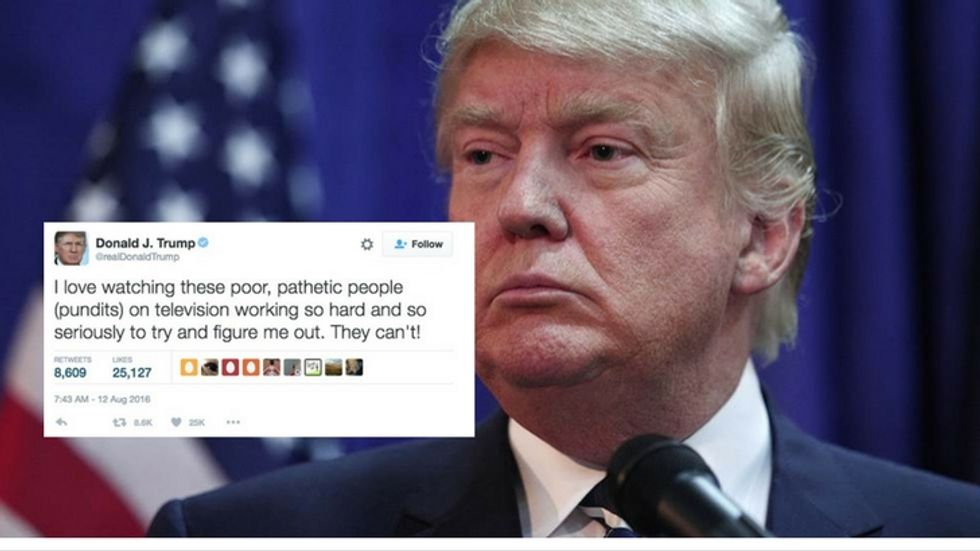 Anyone who has heard a Trump speech can attest to the Republican presidential nominee’s penchant for strongly-worded rhetoric, while official statements from his camp tend to be more reserved. David Robinson, a data scientist at Stack Overflow, wondered if the same held true with Trump’s Twitter rants.

“I saw a hypothesis about Donald Trump’s twitter account that simply begged to be investigated with data,” he writes, citing a tweet by Visual Effects Artist Todd Vaziri. Vaziri had noted the marked differences between tweets sent from Android devices and the ones sent from iPhones, surmising that the most hyperbolic came directly from Trump.

Could the wording of the tweets reveal the identity of the sender?

“In recent times, I've noted that there seem to be these two Trumps,” writes Matyszczyk. “One is determined to call Elizabeth Warren "Pocahontas" and Hillary Clinton "Crooked Hillary.”"

Matyszczyk sourced his data using TweetDeck, a popular Twitter client that, among other things, allows users to see from which device Twitter users post their tweets.

Robinson took it a step further, looking at the Twitter code itself.

“Trump himselfdoes indeed tweet from a Samsung Galaxy,” says Robinson in the article. “But how could we examine it quantitatively?”

Robinson extracted the data using an app called TwitteR, which provides an interface to the Twitter API and allows developers to access the Twitter database to see information such what device was used to send the tweet, what Twitter client was being used, and what time of day the tweets were sent.

He then analyzed the data. He found that Trump’s tweets from an Android device (such as a Samsung Galaxy) had several key differences than the ones sent from an iPhone.

The wording of the tweets differed significantly as well. Android tweets were overwhelmingly more likely to contain words like “crazy,” “weak,” dumb” and “joke.” iPhone tweets were much more hashtag-heavy, favoring things like “#trumptrain,” #trumppence16” and “#crookedhillary.”

“We can see that the Android tweets are angrier and more negative,” writes Robinson, “while the iPhone tweets tend to be benign announcements and pictures.”

“It appears,” echoes an article about the data analysis on Mic, “that cadence is not just unique but pretty mean-spirited.”

It’s impossible to know for sure whether the Android tweets came directly from Trump, and the Trump campaign hasn’t commented on the issue.

“As the frenzied weeks unfold, though,” wonders Matyszczyk, “will we discern more of the alleged schism in the Trump camp?”