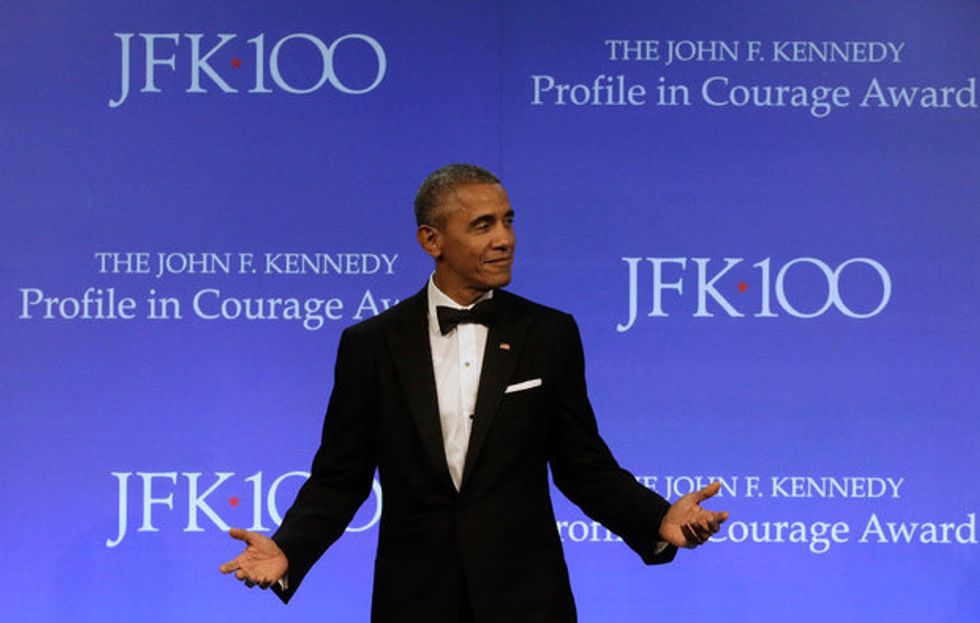 Last night, former President Barack Obama was honored with the John F. Kennedy Profile in Courage Award. Obama was given the award by Ambassador Caroline Kennedy. He used the occasion to encourage people to take political action.

"Courage means not doing what is simply politically expedient but doing what [people] believe in their hearts is right," he said. "And this kind of courage is required of all of us."

"That’s often where courage begins: with the story we tell ourselves about our own capacity to make a difference." —President @BarackObama
— JFK Library (@JFK Library) 1494206737.0

Obama also defended his signature healthcare legislation. He lauded the Democrats who first voted for Obamacare, saying, "They had a chance to insure millions. This same vote would likely cost them their new seats and perhaps end their political careers.These men and women did the right thing, the hard thing, and theirs was a profile in courage, and because of that vote, 20 million people got health insurance that didn't have it before."

"Most of them did lose their seats," he continued. "But they were true to what what President Kennedy defined in his book as a profile in courage. It is my fervent hope, and the fervent hope of millions, that regardless of party, such courage is still possible."

Obama also took a jab at the current Congress: "I hope that current members of Congress recall that it actually doesn’t take a lot of courage to aid those who are already powerful, already comfortable, already influential — but it does require some courage to champion the vulnerable and the sick and the infirm."

The honoree ended his speech with another call for activism, a theme that has been repeated through recent public appearances.

"I have said before that I believe what Dr. King said -- that the arc of the moral universe bends, but it bends towards justice. I have also said that it does not bend on its own, but it bends because we bend it, and we put our hand on the arc and we move it in the direction of justice and freedom and equality and kindness and generosity. It does not happen on its own," said Obama.

Jack Schlossberg, JFK's grandson and Ambassador Caroline Kennedy's son, explained the reasons for choosing Obama when the award first announced. "Faced with unrelenting political opposition, President Obama has embodied the definition of courage that my grandfather cites in the opening lines of Profiles in Courage: grace under pressure," said Schlossberg. "Throughout his two terms in office, he represented all Americans with decency, integrity, and an unshakeable commitment to the greater good."

No one embodies “grace under pressure” like @BarackObama. Proud to announce him as #ProfileInCourage Award honoree. https://t.co/nuIlFN8s6t
— Jack Schlossberg (@Jack Schlossberg) 1488477197.0

The JFK Library Foundation cited "expanding health security for millions of Americans, restoring diplomatic relations with Cuba, and leading a landmark international accord to combat climate change" as the policies that earned Obama the annual award.