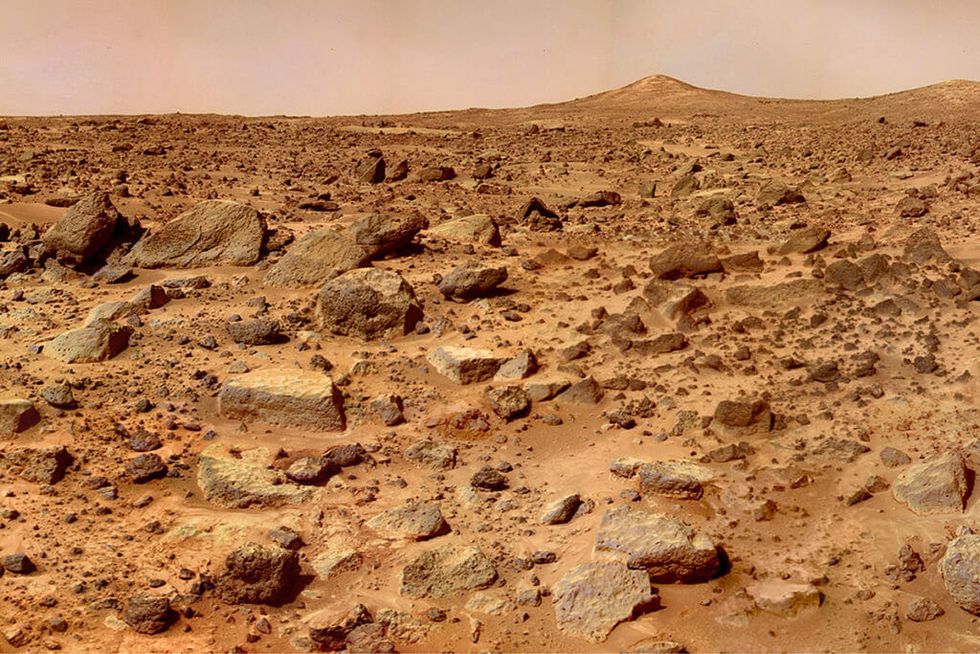 Recent images from Mars suggest that new sand continues to form there, baffling scientists as to its source. New evidence indicates sand may generate from small amounts of water that boils and then levitates sand from the sediment, creating significant erosion across the Martian landscape.

The Life Cycle of Sand

Sand is created by weathering and erosion, which typically include the forces of wind, water or ice. Erosion breaks down pieces of rock or soil, and wind provides a strong mechanism for moving those pieces around. Yet, sand has a limited lifespan, and will eventually be turned to dust by the amount of forceful contact it experiences with wind along the way. This is commonly known to occur on Mars where a range of red dust hues covers the planet.

According to NASA, there are two types of wind experiences that can obliterate sand particles. The first is called saltation, where “[w]ind-blown sand is lifted above the surface of each planet before crashing onto the ground and bouncing in a sequence of repeated hops.”

The second is known as comminution: “Sand grains can also roll along the ground as they are blown by the wind, and they are also jostled by other sand grains that are similarly flying across the surface. All of these repeated impacts tend to wear down the sand grains, smoothing them into a more spherical shape and breaking off small fragments that supply the vast dust deposits of Mars.” NASA adds, “This process…ultimately destroys sand grains and limits the length of time that the particles exist.”

Because sand has a naturally limited life cycle—especially on Mars where wind storms are frequent and turbulent, often spreading dust and sand across the entire surface of the planet—sources of new sand are necessary.

A report from NASA explained, “The fact that we see active sand dunes on Mars today requires that sand particles must be resupplied to replace the grains that are lost over time.”

A sand deposit of Mars. (NASA/JPL-CALTECH/University of Arizona)

Moving water is the primary source of erosion that creates new sand. For example, our vast oceans constantly replenish our beaches with sand here on Earth. But without any knowledge of a similar, large water source on Mars, the source of new sand on Mars has continued to plague scientists.

AsNASA scientists asked in a report: “Where are the modern day sources of sand on Mars?”

NASA’s latest query followed even a most spectacular and related discovery.During a recent pass, NASA’s Mars Reconnaissance Orbiter (MRO) captured an image of what appears to be a sand-producing area. The large crater contains dark bedrock with evidence of the dark material eroding. Dark linear markings with that same hue—which slope downward—indicate sands eroded from that same bedrock, rather than being transported to that location by wind.

NASA reports, “Discovered in images from the Context Camera, this region exhibits dark material that is being eroded from dark layers in the bedrock of a semicircular depression near the boundary of the Southern highlands and the Northern lowlands. Downslope lineations support the notion that these dark sediments are derived locally, and did not accumulate here by coincidence because of the winds.”

To maintain the large sand dunes across Mars, deposits such as these must be common to keep the supply going. MRO will likely find many other similar sites as it explores the planet.

Still, scientists have been searching to understand the sources of new sand on Mars. Despite the absence of sizeable amounts of water on Mars and its thin atmosphere, scientists have recently discovered a new process that could explain large areas of erosion that create new sand and other features on the planet’s surface.

Jan Raack, Marie Skłodowska-Curie Research Fellow at The Open University and lead author of the research, said: “Whilst planetary scientists already know that the surface of Mars has features such as dune flows, gullies and recurring slope lineae that occur as a result of sediment transportation down a slope, the debate continues about what is forming these recent and present-day active features.”

After previous evidence suggested landslides on Mars could be caused by water flowing down the hillsides, Raack and his team mimicked Mars’ thin atmosphere and temperature changes in a specialized lab – the OU Mars Simulation Chamber. They used those conditions to explore the effects of the planet's’ ice deposits on Mars-like soil.

During Martian summers, temperatures can reach 20 degrees Celsius, or 68 degrees Fahrenheit. But because the atmospheric pressure on the red planet is only one-hundredth of that on Earth, scattered ice deposits begin to melt and violently boil. The results of Raack’s experiments, published in Nature, show that resulting pockets of water vapor lift the sand and transport it above the ground.

“We saw in our experiments that wet sand pellets were somewhat ‘floating’ over the sediment.” Raack further explained that the evaporating water created a cushion underneath the particles, effectively turning them into miniature hovercrafts. He added, “Our research has discovered that the levitation effect caused by boiling water under low pressure enables the rapid transport of sand and sediment across the surface.”

During the experiments, the levitation effect lasted only a few seconds, but calculations using a weaker Martian gravity predict that it could last up to 48 times longer. Likewise, two-inch pellets of sand levitated during the study, while the team estimates the same pellets could be tossed up to six feet under true Martian conditions. The results of the study indicate this levitation could be responsible for carving out the deep gullies, large dunes and other land features on Mars.

According to Raack, “This is a new geological phenomenon that doesn’t happen on Earth, and could be vital to understanding similar processes on other planetary surfaces.”

A view from the "Kimberley" formation on Mars taken by NASA's Curiosity rover. The strata in the foreground dip towards the base of Mount Sharp, indicating flow of water toward a basin that existed before the larger bulk of the mountain formed. (NASA/JPL-Caltech/MSSS)

Unfortunately, it’s a difficult thing to prove, leading to some doubt among experts. For instance, Bruce Jakosky at the University of Colorado at Boulder said that if particles actually levitate on Mars, it must occur in only a few, secluded places.

“The key thing I wonder is whether there are very many environments that could have enough water to see these effects,” Jakosky said.

In fact, the gullies and recurring slope lineae—which provide the basis for the belief in water on Mars—could be merely dry landslides, even though they appear wet from previous observations. Further clarification will require significant time because the two rovers currently exploring Mars, Opportunity and Curiosity, are prohibited from any area suspected to have water to avoid contamination risks. Moreover, orbiters circling Mars have insufficient resolution to capture images of levitating sand.

As a result, currently, we can only view the recreation of the levitation process presumed to cause Mars’ planetary erosion in laboratory experiments.

But Raack explained the importance of continuing both experiments and missions: “The sources of this liquid water will require more observational studies; however, the research shows that the effects of relatively small amounts of water on Mars in forming features on the surface may have been widely underestimated.” He added, “We need to carry out more research into how water levitates on Mars, and missions such as the ESA ExoMars 2020 Rover will provide vital insights to help us better understand these processes on our closest planetary neighbour.”