The Last of the UK Orcas May Be Sterile

A dwindling pod of nine orcas in the UK lost another whale in 2016, apparently to fishing line, but perhaps to now-banned pollutants. Those chemicals, PCBs, cause infertility, brain damage, cancer, and other physical damage when they accumulate in high concentrations of animals’ fat stores. 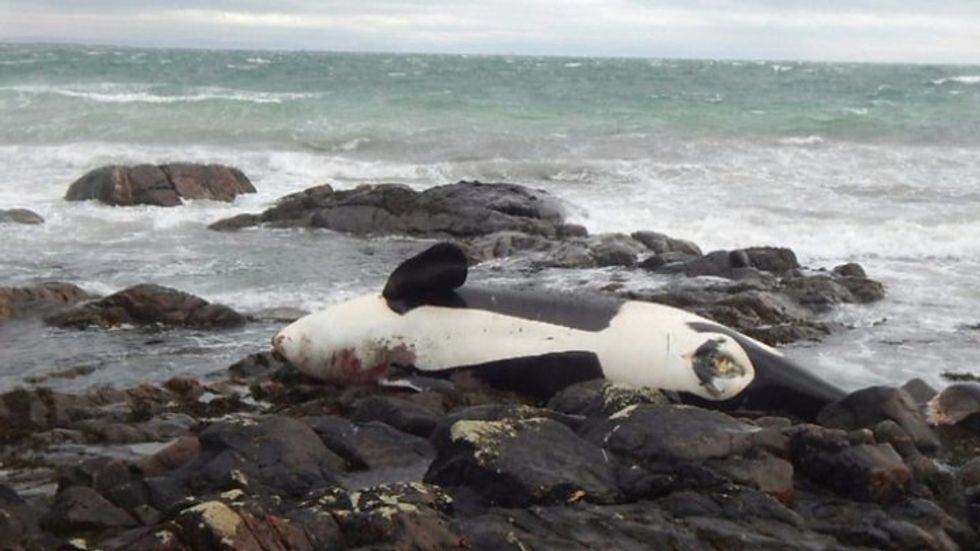 The UK’s only resident orca pod lost another member in 2016. Only eight orcas remain. Scientists first assumed the killer whale lost its life due to entanglement with fishing equipment. Upon further examination, scientists learned that a high level of pollutants may have led to this particular orca’s death, in addition to the pod’s increasing endangerment.

Lulu, an orca—or killer whale—washed up on the shores of the Scottish Isle of Tiree in 2016. Lulu belonged to a community, a group with a unique set of characteristics, which was slightly larger than most killer whales.

“The prospects for [their] population were never good but now they’re worse. With a population as low as eight the chances of them recovering is slim to nil at this point,” according to Dr. Conor Ryan of the Hebridean Whale and Dolphin Trust, which has been monitoring the community since the 1990s.

Apparently, the 6.2-meter orca died after becoming entangled in fishing line and suffering an agonizingly painful death by drowning over several days before washing up on the beach.

Dr. Andrew Brownlow, chief of the Scottish Marine Animal Stranding Scheme,said the enormous public outcry of grief overshadowed any he has seen. “The response has been astonishing,” he said. “It’s the highest level of reaction I’ve seen by an order of magnitude. Killer whales are so charismatic and so iconic that they really capture the imagination. And people have been very affected by the images of Lulu stranded on the beach.”

In addition to the loss of another orca, scientists later made another tragic discovery. Lulu’s blubber contained high levels of the toxic chemicals polychlorinated biphenyls (PCBs).

Explaining further, Brownlow told BBC News, "That [level] puts her as one of the most

contaminated animals on the planet in terms of PCB burden, and does raise serious questions for the long-term survivability of this group [of UK orcas]."

The EPA reports that PCBs don’t break down easily, and can remain in different parts of the environment – including the water – for long periods. Fish and other small organisms absorb PCBs, which are then eaten by other sea dwellers and people. Orcas, which reside at the top of the food chain, can survive for decades with huge layers of fat where PCBs reside, allowing them to accumulate extremely high levels of PCBs.

Moreover, PCBs can affect brain activity. As a result, scientists suspect the chemical contamination could have played a role in Lulu’s death, specifically.

Brownlow said, "Killer whales are incredibly intelligent, they are very nimble, socially aware animals. [Lulu] would have spent most of her probably very long life existing around the waters of the West Coast.

"It is potentially plausible that there was some effect of the PCBs that was in some way debilitating her so she wasn't strong enough or even aware enough to deal with this entanglement [in fishing equipment].

"We very rarely see entanglement in killer whales - actually this is one of the first cases we have documented."

Did PCB Cause Infertility?

Scientists discovered another side effect of PCBs upon examining Lulu; despite her 20-yearage – well past the age of fertility – she had never bred. In fact, there have not been any recorded births in the UK pod in 23 years.

Brownlow, who helped with the analysis, said, “Lulu’s apparent infertility is an ominous finding for the long-term survivability of this group; with no new animals being born, it is now looking increasingly likely that this small group will eventually go extinct.” He added,

“One of the factors in this groups’ apparent failure to reproduce could be their high burden of organic pollutants.”

The EPA reports that PCBs create known risks to the reproductive system, and Lulu’s blubber contained greater than 100 times the safe limit for marine mammals.

In addition to damaging the brain and reproductive systems, PCBs can also cause cancer. Originally, the synthetic chemicals were used widely in industries during the 20th century because they can resist extreme pressures and temperatures, and remain exceedingly stable. However, beginning in the 1970s, a series of bans around PCBs were enacted around the world because of apprehension about its toxicity to animals and humans.

In January 2016 thousands of printer ink cartridges reportedly washed up on beaches on the Southwestern coast of Britain. Apparently, these cartridges spilled from a Hewlett Packard (HP) cargo ship more than a year previously. Cartridges were spotted along beaches throughout the Atlantic Coast of Western Europe, including the Hebrides off Scotland—with an estimated 370,000 remaining at sea as of 2016—according to Oceanographer Curtis Ebbesmeyer’s estimation. Meanwhile, HP claims the cartridges were spilled during an Atlantic storm and planned to set up a fund to pay for collection and recycling.

In Europe, approximately one million tons of PCB-contaminated material needs to be disposed of safely. But that requires incineration, an expensive and difficult, but not impossible process.

Dr. Paul Jepson from London’s Institute of Zoology said, "PCB levels in the United States have slowly declined in humans and other biota such as fish for many years now, and the overall PCB mitigation is generally considered to be successful in the US.

"This is partly related to numerous US Environmental Protection Agency (EPA) Superfund sites, which the EPA is actively working to decontaminate. We urgently need a similar approach in Europe."