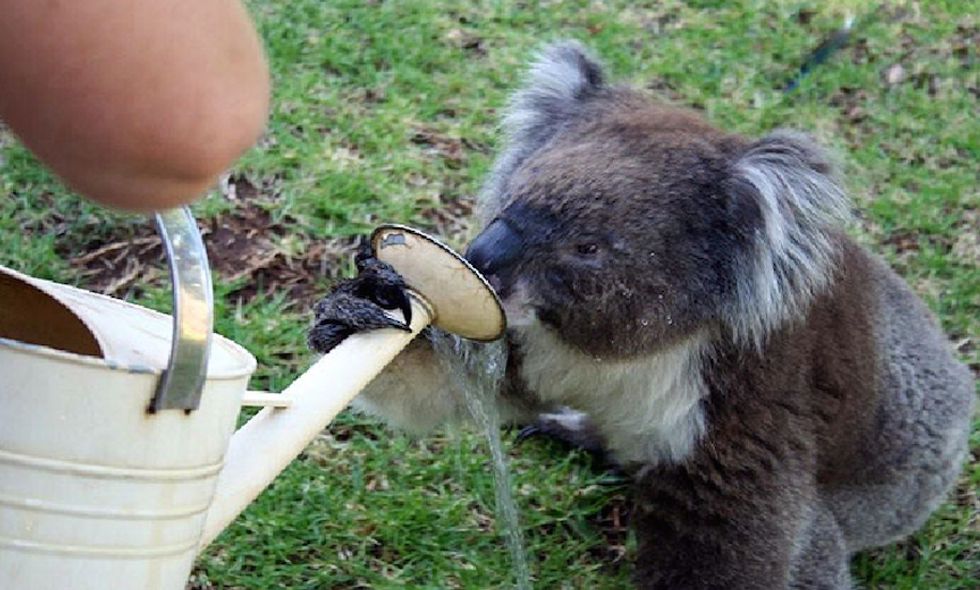 Australian koalas are in danger due to dehydration, loss of habitat and disease, much of which is being attributed to climate change. The Australian Koala Foundation estimates that there are less than 100,000 koalas left in the wild, possibly as few as 43,000.

The next 20-30 years look bleak for the iconic marsupial due to a lack of food and water.

Climate change is expected to lead to the death of thousands of koalas and magnify the impact of other threats. The International Union for Conservation of Nature and Natural Resources, an endangered species monitoring agency, expects a population decrease of as much as 29 percent over three generations–roughly 24 years. If we were talking about humans the equivalent population loss would mean a 75-year-old man would see a world population decrease of more than two billion people over his lifetime.

Living primarily in Eastern Australia, where eucalyptus trees are plentiful, koalas typically spend 18 hours a day sleeping and resting in these fragrant hardwoods. Now facing reduced water stores, koalas have begun to climb down and drink from artificial water stations provided by University of Sydney researchers. The koalas of Gunnedah, a town in southeastern Australia often referred to as the “Koala Capital of the World,” come down from their trees both day and night to drink from the stations for more than 10 minutes at a time.

Koalas can eat up to two and a half pounds of leaves per day, which historically have provided koalas all of their hydration needs. But the leaves are drying out, and researchers attribute the koalas’ newfound thirst to these dry conditions. A National Geographic report highlights prior research suggesting that koalas reject leaves with water contents less than 55 to 65 percent.

In addition to reduced water content, in dry conditions, the eucalyptus trees grow smaller leaves and decrease the amount of photosynthesis. This means one tree can feed fewer koalas.

The World Wildlife Fund describes a bleak future for the eucalyptus tree in Eastern Australia. Despite a recent reduction in forest loss, the WWF projected weakening of key legislation in the frontline states of Queensland and New South Wales. This threatens a resurgence in deforestation, mainly to create pasture for livestock. Key species affected include koalas, possums, gliders and tree-dependent birds.

Koalas stressed by dehydration and loss of habitat are more vulnerable to disease. A study in the Journal of Virology noted koala populations are in serious decline across many areas of mainland Australia. A koala retrovirus is thought to be a significant contributor to koala disease and population decline.

On a positive note, November 2016, the Australia government ratified the Paris Agreement and the Doha Amendment to the Kyoto Protocol reinforcing their commitment to action on climate change. The largest contracted project to date under the Emissions Reduction Fund, the  Catchment Conservation Alliance is a collaboration between the GreenCollar Group, the Queensland Government and Queensland Natural Resource Management groups. Covering 500,000 hectares and approximately 50 properties, the project will re-establish native forest in the Great Barrier Reef catchment, which contain a large percentage of the koala population. In addition to storing carbon, the project will assist with biodiversity conservation, water quality and sustainable agricultural practices to build resilience and improve productivity.

The Queensland government also encourages residents to landscape homes and buildings so as to provide food, shelter and movement opportunities for koalas.

The poet Ada Cambridge describes the sensations of the Australian landscape: "Down those green aisles where golden wattles bloom / Over the fragrant grass / And smell the eucalyptus in a gloom / That is as clear as glass / The dew-fresh scents of bracken and of broom."