Samples from the Church of the Holy Sepulchre prove that the church itself dates to the time of Constantine, while the tomb within, said to be where Christ was laid to rest, is certainly as old as Christianity. 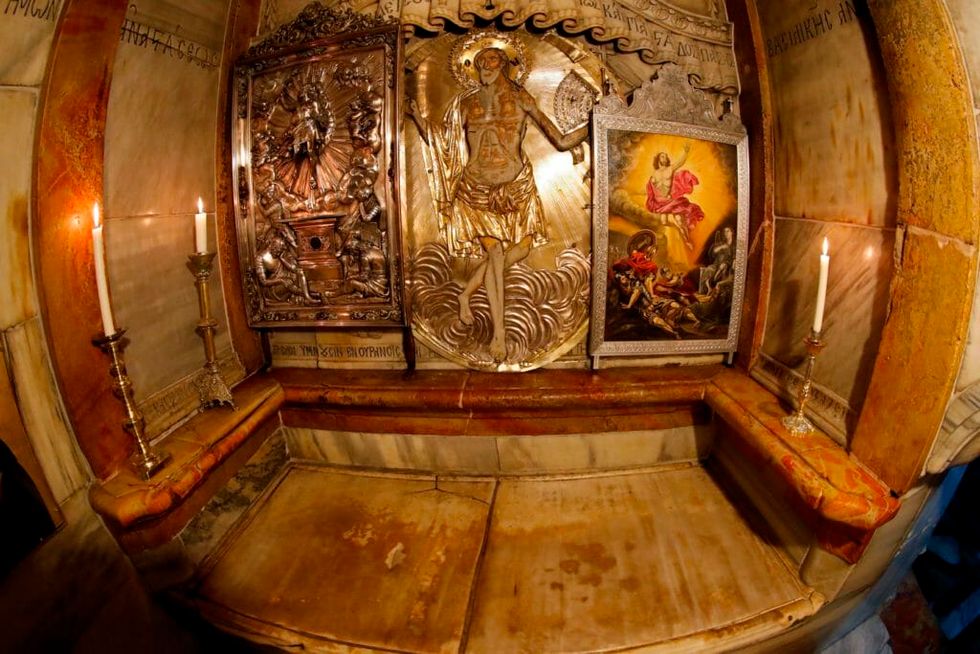 A picture taken on March 2, 2018 with a fish-eye lens shows the interior of the Holy tomb of Jesus Christ, where his body is believed to have laid, inside the Edicule in the Church of the Holy Sepulchre in the Old City of Jerusalem. Photo credit: THOMAS COEX/AFP/Getty Images

A team of scientists from the National Technical University of Athens (NTUA) has confirmed for the first time that Jerusalem’s Church of the Holy Sepulchreis indeed the site of one of Ancient Rome’s earliest Christian shrines.

The Church of the Holy Sepulchre was built to shelter what is traditionally believed to be Christianity’s most sacred site: the burial location of Jesus of Nazareth. The church itself has been subjected to the kind ofviolence and destruction that most historic structures in Jerusalem have seen in the past 20 centuries, as the city’s rulers have changed.

The building itself underwent several remodelings in its first seven centuries. Most notably, it was completely destroyed in 1009, and after its reconstruction, the historical record notes a series of renovations and restorations in the past millennium.

But as for the shrine that the church shelters, scientific investigation has been light. Prior to itsopening in October 2016, when the NTUA team collected their samples, the shrine was not opened for centuries. Tradition holds that the limestone shelf within the shrine is where the body of Jesus of Nazareth lay after his crucifixion in 30 CE.

The church’s site was identified as the tomb of Jesus of Nazareth in 326 CE, when Constantine I  — the first Roman emperor who converted to Christianity —dispatched representatives from Rome, including his mother, Helena, to find and enshrine sites referenced in the New Testament.

And the new research from the NTUA team has confirmed both that the earliest shrine built on the site dates from about 350 CE, which aligns with the contemporaneous records of Constantine. The teamfurther confirmed that the tomb within dates to the first century CE, and the limestone slab within the shrine is itself in keeping with the burial rites of prosperous Jerusalem Jews of the period.

Some members of the multidisciplinary NTUA team took mortar samples from a number of different sites within the tomb, as other parts of the team determined the best way to both preserve and secure the existing architecture.

Due to its site and historic significance, the Church of the Holy Sepulchre is revered across many Christian traditions, and responsibility for its caretaking is shared by the Greek Orthodox Church, the Roman Catholic Church, and the Armenian Orthodox Church, with other interested communities observing.

Prior to this new evidence, the earliest the tomb could be dated was about 1000 CE, during the crusades.

And while neither the NTUA team nor any other scientistscan definitively confirm or deny that the Church of the Holy Sepulchre shelters the site of the burial and resurrection of the individual known as Jesus of Nazareth, what this team has confirmed for the first time is that the church does very likely stand on the spot that Constantine’s representatives determined was the correct site, some 300 years after Jesus’ crucifixion, and that the burial shelf within dates from the era of the crucifixion itself.