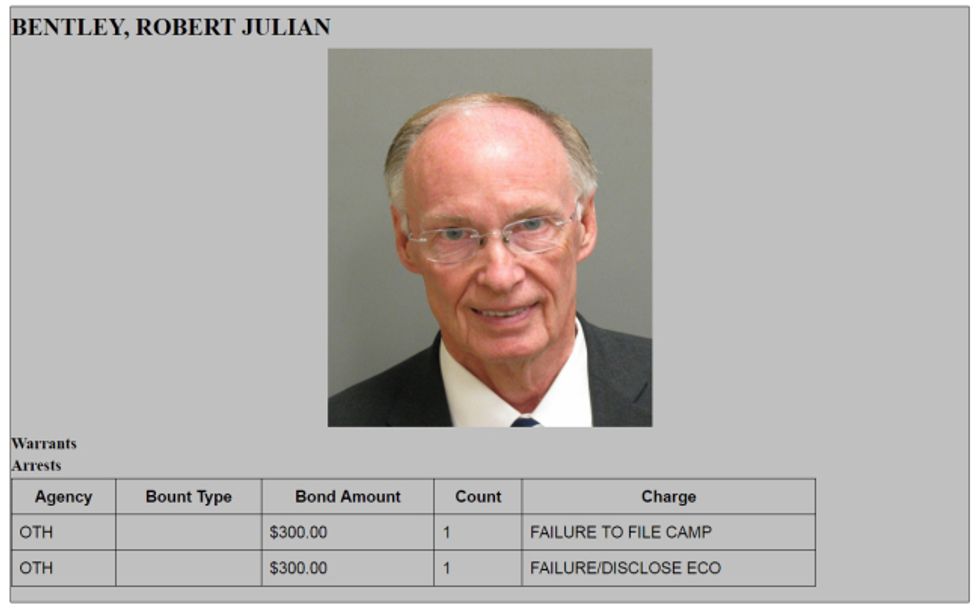 Alabama Governor Robert Bentley agreed to resign from office and never hold public office again. The deal he reached also required him to plead guilty to two misdemeanors, repay misused state funds, and complete community service. He will avoid felony charges as a result of the deal.

"The time has come for me to look at new ways to serve the good people of our great state. I have decided it time for me to step down as Alabama's governor," said Bentley, "I leave this office that I have held, that I have respected, that I have loved for seven years to focus on other, and possibly more effective areas, of service."

Impeachment hearings were scheduled to begin on Monday, just over a year after Alabama's former Law Enforcement Secretary Spencer Collier revealed that Bentley was having an affair with Rebekah Mason, a top adviser. Collier had heard recordings between the governor and Mason in 2014, but said nothing until he was fired by the governor in March of 2016.

On Wednesday, the Alabama Ethics Commission forwarded four charges of ethics violations to prosecutors. Then, documents describing details of the alleged affair, Bentley's use of state resources to cover it up, and the misuse of campaign funds were released by the House Judiciary Committee on Friday. Bentley and his attorney's spent the weekend negotiating the deal.

Bentley is the third high-level Republican office holder in Alabama to be forced out in nine months. House Speaker Mike Hubbard was convicted of ethics violations.  Chief Justice Roy Moore was suspended for violating judicial ethics with an order against same-sex marriage.

New Governor Kay Ivey, who took the oath of office last night, has said, "The Ivey Administration will be open, it will be transparent and it will be honest."

Alabama Democrats have been quick to point out the hypocrisy of running on family values while committing ethical violations. Nancy Worley, chair of the state party, said,  "To get elected, Republicans told Alabamians they were the party of integrity and family values, yet they govern by fattening their own pockets, having love affairs, and disrespecting the founding principles of our government."

Republican "integrity" and "family values" = scandal and corruption. It's time for them to go. https://t.co/TKp4hZADqz #ALPolitics
— Alabama Democrats (@Alabama Democrats) 1491867226.0

The scandal is unlikely go away quickly. During investigations this year, Bentley appointed the attorney general leading one of them, Luther Strange, to the Senate to replace Jeff Sessions, leading to questions. During the investigations of Bentley, Strange had tried to get the Alabama legislature to stop investigating until his investigation was complete. During the announcement of Strange's appointment, he told reporters "We have never said in our office that we are investigating the governor. And I think it’s somewhat actually unfair to him and unfair to the process that that has been reported out there."

Alabama is also embroiled in controversy over civil rights law violations due to the closing of 31 driver's license offices after requiring that voters use state identification. The closures included all the offices in eight of the eleven counties with majority African-American populations.

In the documents released on Friday, Collins claims that he was told to do so by Mason. According to the report, "Collier claims he reported this to the Attorney General's office because he was concerned about a Voting Rights Act violation."