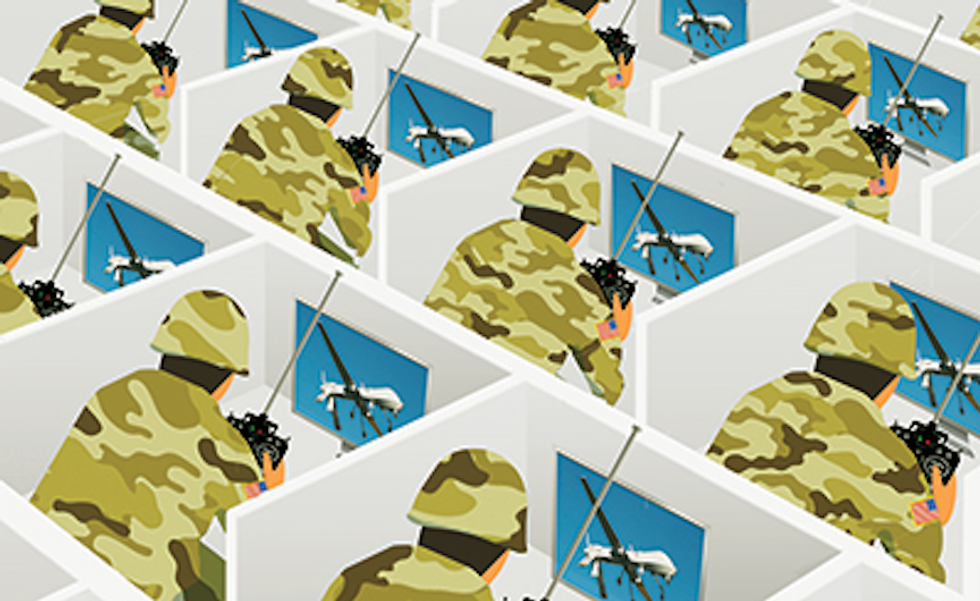 [DIGEST:  The Independent, The Intercept]

One of the most prominent symbols to emerge from American global anti-terrorism efforts is the drone: a killing machine that delivers death from the skies, and is all the more effective because it is cold, calculating and—literally—inhuman.

But drones have pilots, and new reports suggest that the mechanical predators are as human as their pilots—and vulnerable to the same kinds of stresses and mistakes as soldiers in combat.

American drone strikes in Afghanistan and Pakistan are estimated to have killed more than 5000 people, all of whom were supposed to have been enemy combatants. Yet operators say they frequently had no clear human intelligence or imagery for their targets. Still, anyone who popped up on their screens during a mission was to be considered a terrorist. Children were called “fun-sized terrorists” or “TITs” (for terrorists in training). Operator Cian Westmoreland was incredulous that he is credited with 204 “enemy kills.”

“That is BS. Not all the ‘enemies’ were enemies,” he said.

and has developed a “callous institutional culture” to the death of children.

“We have all seen the abuse first hand,” said former Air Force Staff Sgt. Brandon Bryant, “and we are horrified.”

While the Bush and Obama administrations have kept the details of the drone programs secret, it has been alleged for years that the Pentagon defines anyone killed by a drone an enemy combatant, thus grossly inflating the drones’ records of success.

“It bothers me when they say there were seven guys, so they must all be militants,” an unnamed administration official told the New York Times in 2012. “They count the corpses and they’re not really sure who they are.”

But the allegations, echoed by documentary films that put soldiers on camera and on record, go farther, suggesting that a pattern of official deceit was exacerbated by an unofficial culture of traumatized soldiers with substance abuse problems pulling the triggers. The results may be catastrophic. Bryant also says that every time drones kill civilians, it creates more terrorists with their sights on America. “We kill four and create 10 [militants],” Bryant said. “If you kill someone’s father, uncle or brother who had nothing to do with anything, their families are going to want revenge.”

A 2014 Government Accountability Office report said that the Pentagon was inadequately supporting drone operators, who live on stateside bases but cannot talk about their work, face intense pressures, work long shifts, and often don’t know when their deployment will end. Operators describe the job as involving long, isolated stretches punctuated by intervals of intense

combat. The conditions are alleged to have created a culture of addiction and substance abuse that aggravated the drone program’s already substantial troubles.

Pilots say they and many of their fellow operators had serious problems with combat stress and substance abuses including alcohol and cocaine. Former senior airman Michael Haas has alleged that at least a half-dozen soldiers in his unit had been impaired by drug use during missions. Pilots allege they used bath salts, marijuana, and alcohol prior to missions to dull the reality of what they were doing.

Hass called it commonplace, while Bryant said that requests to seek counseling and therapy were met with threats to have his security clearance revoked. “That scared a lot of people,” he said.

The Pentagon shows no sign of altering its drone program in response to these allegations. Furthermore, the Defense Department recently announced that drone pilots will now be eligible for military honors similar to those awarded to pilots who flew over Iraq and Afghanistan, a controversial decision that military officials have been debating since 2013.

Drone pilots like Westmoreland and Bryant may have been killing the wrong people, but they may now receive honors celebrating their service. That may be both ironic and humane: if new testimony is to be believed, whatever their effect on the world, drone pilots have suffered for their service.