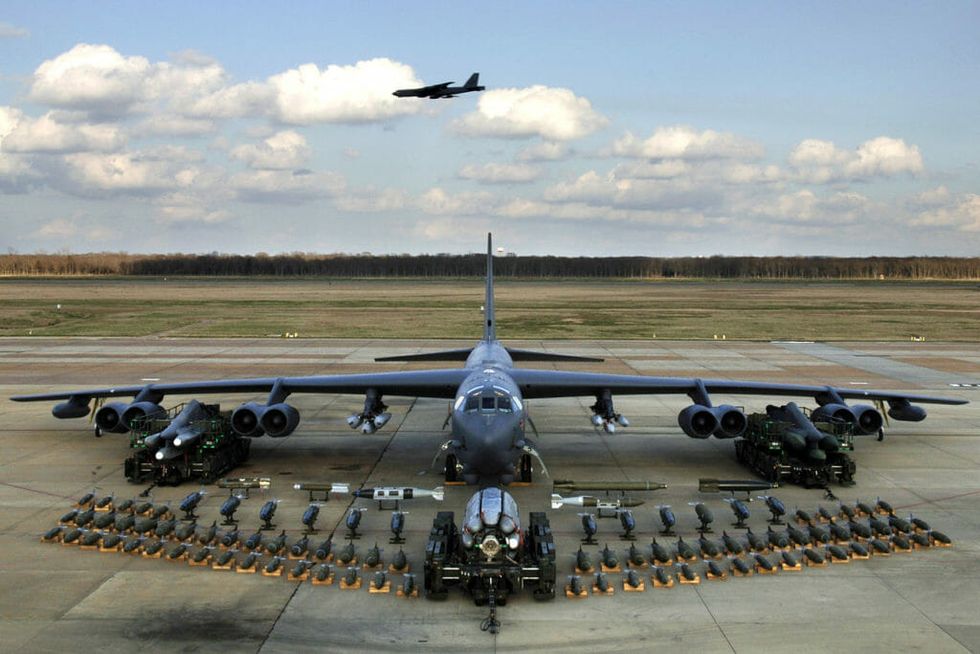 The United States Air Force is preparing their nuclear-armed bomber planes in anticipation that they'll receive the order to go to 24-hour alert status, according to a Defense One report. We have not seen this heightened status for the B-52s since the ending of the Cold War in 1991.

These preparations involve renovating the long-dormant concrete "alert pads" at the end of the runway at Louisiana's Barksdale Air Force Base, where B-52s once parked, ready to take flight at a moment's notice with their nuclear arsenal. Not only could these pads find themselves occupied again, if the order is given, but the renovations currently under way will allow pilots and aircrews to position themselves alongside the bombers.

While officials deny the move is part of any specific plan or because of current global tensions, the alert pads and the 24-hour alert status have not been used since the Soviet Union collapse in 1991. During the Cold War, the possibility of nuclear war with the soviets was a constant fear.

General David Goldfein, Air Force chief of staff, said this is nothing more than being prepared for any possibility: "This is yet one more step in ensuring that we're prepared," he said in an interview with Defense One while touring Barksdale and other U.S. bases that support nuclear action.

“I look at it more as not planning for any specific event, but more for the reality of the global situation we find ourselves in and how we ensure we’re prepared going forward.”

Though the 24-hour alert status order has not been given, Defense One says that decision would be made by General John Hyten, commander of U.S. Strategic Command (STRATCOM), or General Lori Robinson, head of U.S. Northern Command (NORTHCOM). The former is in charge of the military's nuclear arsenal, and the latter defends North America.

“The world is a dangerous place and we’ve got folks that are talking openly about use of nuclear weapons,” Goldfein said to Defense One. “It’s no longer a bipolar world where it’s just us and the Soviet Union. We’ve got other players out there who have nuclear capability. It’s never been more important to make sure that we get this mission right.”

While Gen. Goldfein says there is no expected specific event, preparation of the B-52s for the possibility of 24/7 readiness does come at a time of rising tensions in the geopolitical climate, intensified by Norther Korea's growing nuclear arsenal and Trump's callous name-calling of their leader, as well as by Russia's increasingly active armed forces.

In addition, earlier this month Trump gave a cryptic, ominous warning after a White House meeting with U.S. military leaders.

On the evening of October 5, while throwing a dinner party for military commanders, Trump invited reporters to the State Dining Room, reports the New York Times. He gestured to the military leaders, and told the reporters: "You guys know what this represents? Maybe it’s the calm before the storm.”

When questioned by the reporters for what he had meant, if he was referring to Iran, or ISIS, or North Korea, the president just smiled and repeated: “Could be the calm before the storm."

To add more confusion and uncertainty into the mix, Trump recently signed an executive order that allows the recalling of retired Air Force pilots, yet the Air Force itself reports they have no intentions of actually recalling those pilots. Trump also used executive action to extend his authority to recall back into service "any retired member of the Regular Army, Regular Navy, Regular Air Force, or Regular Marine Corps."

The B-52 — also called the Stratofortress — can fly up to about 50,000 feet elevation, and release a variety of weapons, including cluster bombs, gravity bombs and precision guided missiles. According to Defense One, two nuclear command planes, the E-4B Nightwatch and E-6B Mercury, will also be deployed to Barksdale. During a nuclear war, they would serve as flying command posts of the defense secretary.