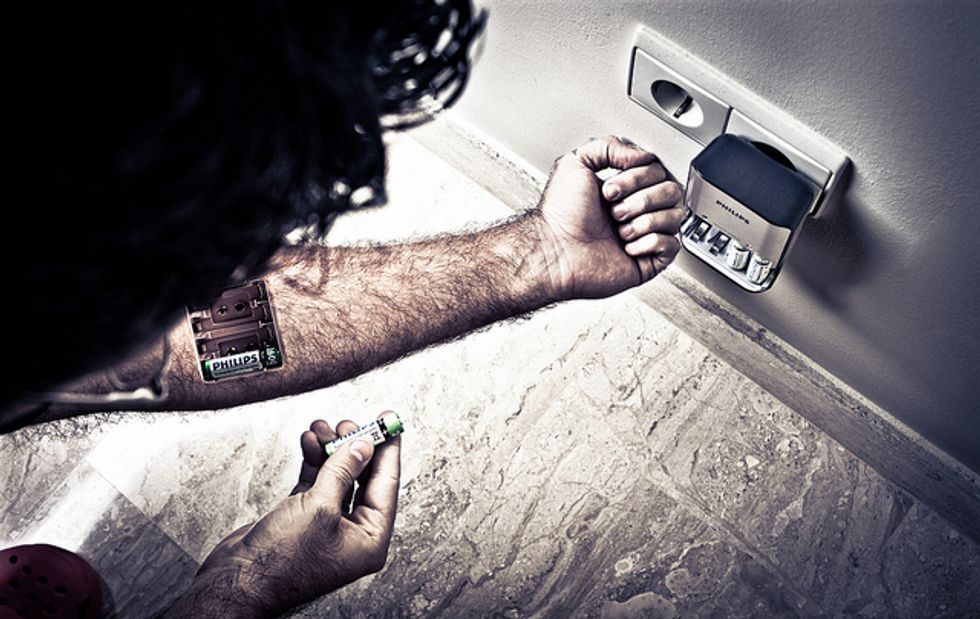 This is the first in a series about using technology to overcome the most primal challenges to humanity: disease, aging, and death.

In 2011, Russian multi-billionaire Dmitry Itskov founded the 2045 Initiative, a nonprofit research-supporting organization focused on the goal of “indefinite life extension”-- that is, allowing people to live as long as they choose (barring catastrophic accidents) by finding a way to transfer human minds into completely synthetic bodies.

The Initiative's website outlines the “Avatar Project,” a series of technological milestones, each one moving us closer to the ultimate goal of freeing human from the burdens of their bodies. The timeline is aggressive; they want humanity to move beyond illness, aging and death by the year 2045. But how will that happen, and what form will human beings and human minds take? The Avatar Project can’t be sure, but bodies made up of holograms or minds made up of circuits do not lie outside the possible. As Project says on its website:

“Today it is hard to imagine a future when bodies consisting of nanorobots will become affordable and capable of taking any form. It is also hard to imagine body holograms featuring controlled matter. One thing is clear however: humanity, for the first time in its history, will make a fully managed evolutionary transition and eventually become a new species.”

That’s some pretty grand talk. Some might even call it delusional. Talk of holograms and nanobots conjures up images from science fiction: sparkling beings of light, magical “pure intelligence” unencumbered by physical form, computers that glow and speak with booming voices that seem to come from nowhere. Our popular culture presents these as the fantastic “technology of the future,” virtually indistinguishable from how our literature has described magical sprites, the gods of mythology, or angels.

When you jump to the “final page” of the Avatar Project, it in fact does read like run-of-the-mill science fantasy. It’s the same story that has mesmerized us in film and novels for more than half a century. It is also just as easy to dismiss. Yet the “roadmap” they present for their project begins quite modestly.

The first series of projects (Avatar A) involves advancing human-computer interaction to the point where we can fully experience a remote environment through a robot. Much of the technology for this kind of experience already exists. Between Microsoft Hololens and Oculus Rift, cutting-edge companies are scrambling to produce technology that lets us see and interact with distant environments as if we were there. Part of Microsoft’s demo of Hololens features a tour of Mars, allowing you to experience the surface of that alien world from the point of view of the Mars Rover.

There is even an immersive system under development, called DORA (Dexterous Observational Roving Automaton), that allows users to explore remote environments in real time from a robot’s point of view. The 2045 Project would like to see these human-machine interfaces refined even further, so that by 2020 we could control these remote robots as naturally as we control our own bodies.

So far so good, right? From there, they hope to merge the remote robot bodies with our organic ones by gradually replacing our organs and limbs with artificial counterparts until we are nothing more than brains supported by artificial bodies. That is the “Avatar B” portion of the project, which they hope to achieve by 2025. It seems extreme, but we already have elements of this technology emerging today. We have manufactured prosthetic limbs of incredible dexterity that can be controlled by the user’s own thoughts. We can give people artificial skulls and highly sophisticated artificial internal organs, and we are on our way to creating artificial eyes and artificial noses that surpass the capabilities of their biological counterparts.

We generally think of prostheses as technology to replace damaged body parts. But as these artificial parts begin to surpass our natural abilities, how long will it be before people are volunteering for surgery that gives them bionic arms, legs, or eyes? And if that can be done, why not take that last step?

By then, the thinking goes, advances in artificial intelligence and brain-mapping technology will allow us to replace our biological brains with artificial brains. That’s “Avatar C,” scheduled to be achieved by 2035. The hope is that the "brain" will comprise some kind of artificial circuitry that we can be “uploaded to” or mapped on to so that our thoughts, our very selves, are housed in an artificial brain. Seems crazy? We already see some research in this direction. Researchers at MIT have successfully transferred memories from one mouse subject to another mouse, so that the second mouse is fearful of things it never even experienced. And just as scientists are looking at artificial replacements for parts of the body, we may soon see the possibility of

neural prostheses, possibly an artificial brain stem or an artificial visual cortex. As with the body, we may be able to replace worn-out parts of the brain piece by piece, bit by bit, until the entire brain is made up of chips and circuitry.

Finally, according to the Project, technology will advance to the point where the way we interact with the world will transform in completely radical ways that we can barely imagine. (It is no small coincidence that 2045 is also the touted year of the Singularity, made popular by John van Neumann and futurist Ray Kurzweil, who predicted that after this year, the rate of change of humanity's progress becomes asymptotic and unpredictable.) Once we are completely transformed into computer hardware, why restrain ourselves to bodies that resemble our evolved biological form? Why not have a 10-story high body with six limbs? Why not have a spaceship for a body? Why not use your mind to control multiple bodies to perform complex coordinated tasks that today are completely unimaginable? That is “Avatar D” -- goal date: 2045.

If all this is making your head spin, and if you feel like the jump from Microsoft Hololens to “uploading our minds into computers” is a bit much, you are not alone. The media seems unsure how even to report on the Avatar Project. Forbes calls the project “outlandish.” Most news outlets cautiously point out that it seems like ridiculous science fiction, while at the same time acknowledging the great advances we’ve already seen in the areas of artificial limbs, neural mapping, and human-computer interfaces.

Dario Borghino was relatively skeptical in his article for Gizmag: “When speculating on seemingly unobtainable goals such as this, one must be careful not to believe that improbable technological advances automatically become more likely simply by looking further away in the future… Looking at Avatar's proposed timeline, Itskov's project seems to suffer from the same fallacy.” Paul Allen, at the MIT Technology Review, has also expressed skepticism about the timeline of the project. He talks about the “complexity brake”: the fact that we discover greater and greater complexity the deeper we dig into details about how the mind and brain work, and any “straight line prediction” of how quickly we will advance does not take into account these inevitable new discoveries and the stumbling blocks they will create.

But Borghino is quick to point out that Itskov is not the only person interested in this goal. In addition to the hundreds of scientists who have expressed interest in support for the 2045 Initiative, DARPA has allotted millions of dollars for research into semi-autonomous bipedal remote “avatar” robots for soldiers. Perhaps the exact timeline

of the progress is optimistic--and even supporters of the 2045 Initiative admit that it is--technology is marching forward, and the milestones of the Avatar Project seem to be pointing the way.

Some have even begun to ask the harder philosophical questions: Were it to succeed, will we still be human? Or will we be robots? At the Global Futures 2045 conference in 2013, scientists and philosophers gathered to talk about the implications of the Avatar Project, asking abstract questions about whether a mind uploaded to a computer would still “be you” and whether it would be ethical to simply “copy” minds like one copies software, creating new “selves” out of thin air.

But while deep thinkers debate the moral and metaphysical implications, the average person is stuck at a much simpler question: is it really possible for a human being’s self to be uploaded to a computer in the first place? Sure, this is something we see in science fiction movies and novels all the time. Johnny Depp’s character in the 2014 movie Transcendence has his consciousness basically leak out of his body and become “one” with the Internet. In the 1991 novel Synners by Pat Cadigan, a druggie burnout is used for experimental neural connections between the Internet and his brain, and his mind also “escapes” out into the broader net as a result of this connection. And in Rudy Rucker’s 1982 novel Software, intelligent robots on the moon want to “reward” their aging creator by smuggling him to the moon and transferring his mind to a robot body so that he can continue living. The idea has been around in science fiction for a very long time.

But science fiction is easily dismissed, as fiction. People who are not scientists or philosophers often can't comprehend how a conscious being possibly could be “uploaded” at all. Moreover, many scientists do a poor good job of explaining this fundamental assumption of the project. As a result, great skepticism and outright dismissal greet endeavors like the 2045 Initiative and the Avatar Project. Highly religious or “naturalist” objectors even worry that people concoct ideas like this at all: if we still don’t fully understand the origin and nature of a person’s essence, soul and self, why do we think this will work? Won’t people who try to “upload” themselves to a computer quite simply die?

For most, it seems counterintuitive, even spooky, to talk about “uploading” a person’s consciousness. Many scientists, on the other hand, not only think it’s possible, but one of the most natural and uncontroversial ideas in the world.

The second article in this series will discuss why scientists believe consciousness can be uploaded to a machine. After that, in part three, three strong advocates of the 2045 Initiative answer two important questions: Assuming we can accomplish this goal, should we do it, and what will happen next?