Scientists Actually Wonder: Are Aliens Behind these Distant Radio Bursts? 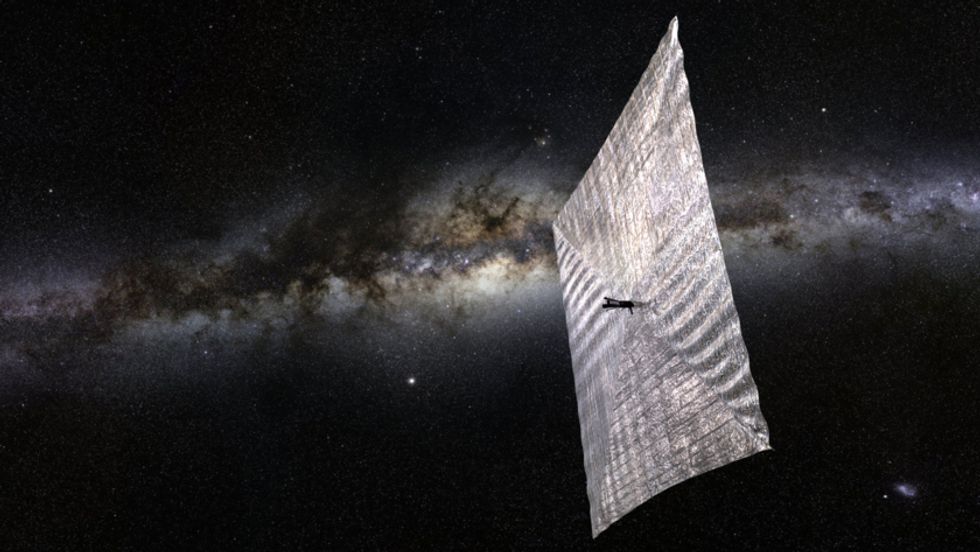 Fast radio bursts, signals detected in deep space that give off the energy of roughly 500 million suns, have confounded scientists for a decade. Back in 2007, scientists taking a close look at six-year-old data came across an incredibly strong and short signal from deep space. These signals are very brief—5 milliseconds—and detectable on the radio spectrum. And they’re important because scientists don’t know what they are; any mystery in space presents a new opportunity to learn about the universe.

There are multiple hypotheses surrounding their origin, from supermassive black holes to explosions of superluminous supernovae, and now, two scientists present a new explanation: They just might be the propulsion system for alien spacecraft.

In a new study accepted for publication in the journal Astrophysical Journal Letters, Harvard physicists Avi Loeb and Manasvi Lingam analyzed a series of fast radio bursts. Since their discovery in 2007, scientists have only detected a total of 17 fast radio bursts. The duo focuses on the only repeating burst. Their conclusion: It’s possible these signals are the result of a massive alien structure.

"Fast radio bursts are exceedingly bright given their short duration and origin at great distances, and we haven't identified a possible natural source with any confidence," said Loeb in a recent statement. "An artificial origin is worth contemplating and checking."

One potential artificial origin, according to the new study, might be a gigantic radio transmitter built by intelligent aliens. So Loeb and lead author Manasvi Lingam, of Harvard University, investigated the feasibility of this possible explanation.

Loeb and Lingam explore the theory that the source of the repeating fast radio bursts could be a giant radio transmitter. Aliens could create such a structure for two purposes: first, for communication across great distance. Second, it could propel spacecraft equipped with solar light sails. These sails, covered in a reflective material, are similar to sailing ships. Instead of using wind for propulsion, however, they bounce light photons off their sails, which pushes the craft through space. The acceleration is slow, but steady, and eventually a light sail craft could approach the speed of light.

It’s a technology NASA is familiar with; they’ve used it in the past, and last year, they began tests on HERTS, a massive light sail that could propel spacecraft to the edge of the solar system in record time. Bill Nye, of Science Guy fame, is CEO of a space advocacy organization called The Planetary Society, which explores solar sail technology as a propulsion method for small satellites. Breakthrough Starshot, a Stephen Hawking-supported project, meanwhile, plans on using light sails sending robotic probes to other star systems. The advantages to light sail technology are myriad, but perhaps the most important is that it requires no fuel.

Most light sail craft depend on the light from our Sun for propulsion. However, it also possible to use a laser beam on light sails, and that’s just what scientists Loeb and Lingam propose could be happening. The fast radio bursts could actually be an alien civilization using laser beams on its light sail spacecraft.

The really impressive feat, though, would be the source required to power a beam of this size. Scientists determined that the fast radio bursts are coming from a dwarf galaxy about 3 billion light years from our planet. For these signals to be strong enough for us to detect, the power source must be enormous—think the size of an entire planet.

Loeb and Lingam aren’t suggesting that this is what’s happening, only that it’s a scientific possibility, given what we know. But what a possibility it is.