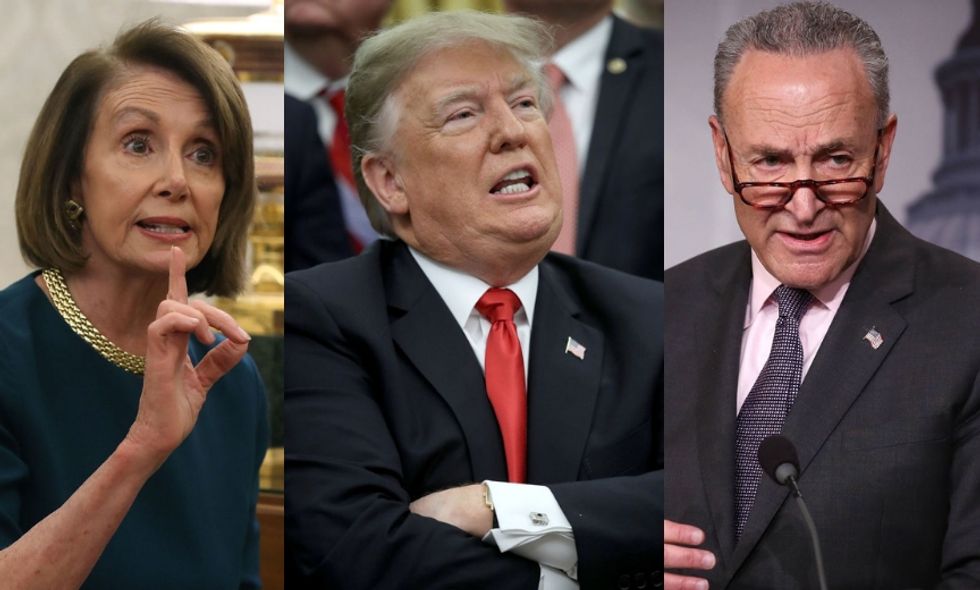 In a development that may not be surprising to many, President Donald Trump embarked on a Twitter tirade as the partial shutdown of the government over border wall funding stretches into its second day.

The President blamed Democrats for the shutdown (despite vowing to take ownership of it himself), while also criticizing the Federal Reserve in the wake of an increasingly uncertain financial market.

The top-ranking Democrats tweeted the same statement assuring that it's the President—not the Democrats—who remains guilty of "plunging the country into chaos."

It's Christmas Eve and @realDonaldTrump is plunging the country into chaos. The stock market is tanking and the pre… https://t.co/xps2ylAYte
— Nancy Pelosi (@Nancy Pelosi) 1545678047.0

Instead of bringing certainty into people’s lives, @realDonaldTrump is continuing the #TrumpShutdown just to please… https://t.co/XhK7VQpDHR
— Nancy Pelosi (@Nancy Pelosi) 1545678047.0

They criticized the mixed messages coming from the White House regarding Trump's willingness (or lack thereof) to compromise on the issue.

Americans across the country agreed.

Americans stressed to the two lawmakers that acquiescing to Trump's demands is not an option.

@SenSchumer @JJohnson2u Do not cave! He owns it...golden boy Mideast peace coordinator should be able to figure this out for him..
— Laurie Waller (@Laurie Waller) 1545677865.0

As the shutdown drags on, it won't be long before one side is forced to show its hand. Already having passed a continuing resolution that included Trump's original request of $1.6 billion for border security (which he rejected), it doesn't look like the Democrats will be backing down on this issue any time soon.