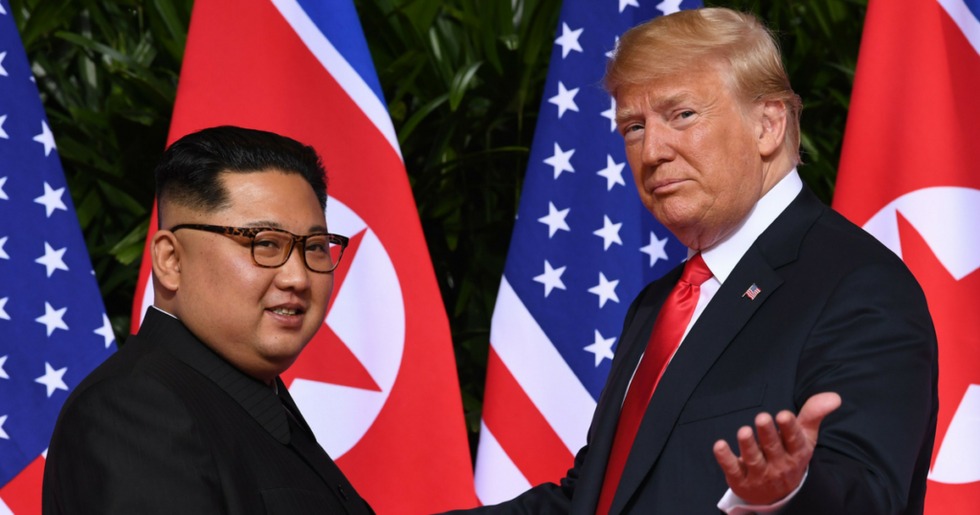 TOPSHOT - US President Donald Trump (R) gestures as he meets with North Korea's leader Kim Jong Un (L) at the start of their historic US-North Korea summit, at the Capella Hotel on Sentosa island in Singapore on June 12, 2018. - Donald Trump and Kim Jong Un have become on June 12 the first sitting US and North Korean leaders to meet, shake hands and negotiate to end a decades-old nuclear stand-off. (Photo by SAUL LOEB / AFP) (Photo credit should read SAUL LOEB/AFP/Getty Images)

Recent satellite imagery has shown ongoing improvements and upgrades being made to one of North Korea's nuclear research sites at a "rapid pace."

"Commercial satellite imagery from June 21 indicates that improvements to the infrastructure at North Korea’s Yongbyon Nuclear Scientific Research Center are continuing at a rapid pace," writes 38 North, who published a study of North Korea's nuclear facilities on Tuesday.

These images come just weeks after U.S. President Donald Trump and North Korean dictator Kim Jong Un attended a joint summit in Singapore, at which both sides signed a provisional agreement to pursue peace at the cost of North Korea committing to the denuclearization of the Korean Peninsula.

North Korea's activity at Yongbyon should not, however, be interpreted as a breach of the agreement signed by Trump and Kim, the report indicated.

Continued work at the Yongbyon facility should not be seen as having any relationship to North Korea’s pledge to denuclearize. The North’s nuclear cadre can be expected to proceed with business as usual until specific orders are issued from Pyongyang.

Satellite imagery suggests North Korea has completed a new engineering facility, as well as "modifications to the 5 MWe plutonium production reactor’s cooling system." The report states, however, that "a less-than-normal cooling water discharge from the outfall pipe makes a determination of the reactor’s operational status difficult."

38 North also indicated that updates to cooling pools appear complete, however, "determining the operational status of the reactor is particularly difficult at this time."

A new radiochemical laboratory, where used plutonium is separated from spent fuel rods, has been observed as well. Operations at the uranium enrichment plant are thought to be continuing too, due to "increased roof staining" from "water vapor coming from the six cooling units associated with gas centrifuge operations."

The Yongbyon radioisotope production facility, on which construction began in 2015, has seen two new buildings erected since last year. The facility serves to "store rail-delivered chemicals to support operations in the main production building," according to 38 North.

The agreement signed by Trump and Kim contains the weakest and least enforceable terms yet pursued by the United States in the decades-long effort to get North Korea to abandon its nuclear weapons program.

It contains no language establishing any inspections, verification, or demands for complete, unequivocal denuclearization, despite Secretary of State Mike Pompeo and other administration officials’ assurances of enforcing North Korea’s promise.

Of course, we’ve been down this road many times before, and North Korea has never kept its word.

In recent days, Trump's tune on North Korea has drastically changed. The day after the summit, the president tweeted that "there is no longer a nuclear threat from North Korea."

Last week, Trump signed an executive order extending the national state of emergency over the looming danger of a nuclear-equipped North Korea.

The existence and risk of proliferation of weapons-usable fissile material on the Korean Peninsula and the actions and policies of the Government of North Korea continue to pose an unusual and extraordinary threat to the national security, foreign policy, and economy of the United States.

Things may not be all gloom and doom, though. North Korea appears to have canceled its annual anti-U.S. rally - a sign that relations between the two countries could very well be improving. Last year's event was attended by 100,000 people.