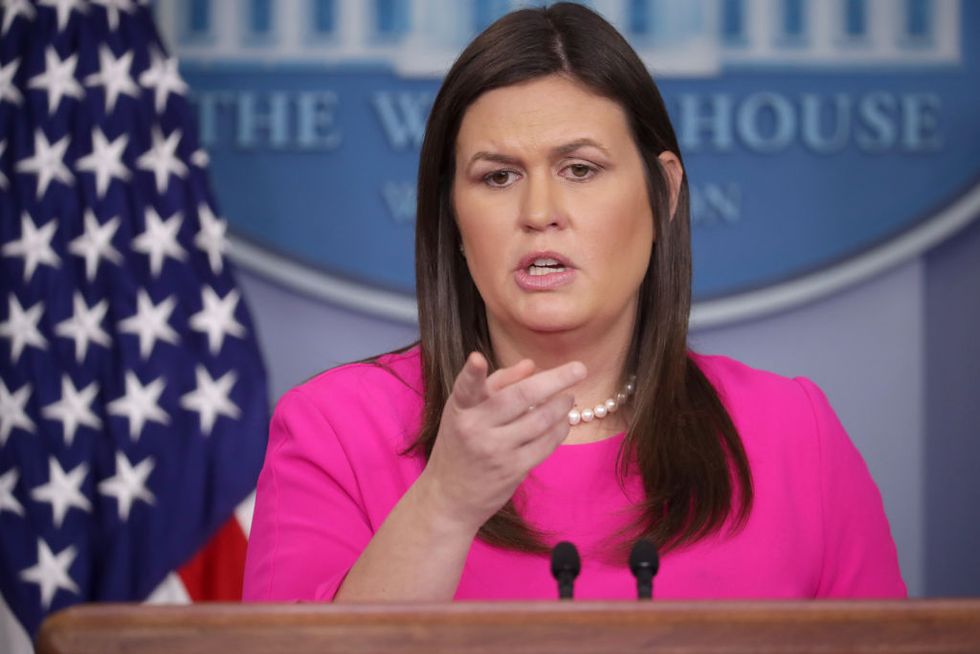 The news that Paul Manafort, President Donald Trump's former campaign manager, had decided to accept a plea deal and cooperate with Special Counsel Robert Mueller rather than proceed with a second federal trial, prompted White House Press Secretary Sarah Huckabee Sanders to issue a statement which sounds as if it was dictated by the president himself.

"This had absolutely nothing to do with the president or his victorious 2016 presidential campaign,” Sanders said. “It is totally unrelated.”

Not only does it reflect Trump's repeated talking points about those who have been caught up in the Mueller probe so far, but also the addition of the unnecessary descriptor "victorious" in reference to his 2016 election win, seems to betray Trump's well-reported insecurity about having lost the popular vote to Hillary Clinton, and his constant need to remind people that he won.

The word "victorious" is also rife with a certain irony: We know that Manafort has agreed to cooperate with Mueller, but we don't know what he will reveal. Whatever he does reveal, though, would further cast the legitimacy of Trump's presidency––which the U.S. intelligence community unanimously agrees was orchestrated under the direction of Russian leader Vladimir Putin––further into doubt.

Paul Manafort is scum, but according to @PressSec, his crimes had absolutely nothing to do with the supremely honor… https://t.co/hAMpzV0USb
— Kim (@Kim) 1536949469.0

Sarah Huckabee Sanders: #Manafort case has nothing to do w/#Trump. Has any WH press secretary discredited her prof… https://t.co/LfcWU95xWM
— Gina InTheBurg (@Gina InTheBurg) 1536949050.0

@PhilipRucker @PressSec Yea, sure. Manafort accepted no money for the months he worked for Trump's campaign. Was at… https://t.co/fUFjmS669r
— Debra Barcon (@Debra Barcon) 1536941491.0

The president's attorney, Rudy Giuliani, also insisted that Manafort's plea deal had nothing to do with Trump.

“Once again, an investigation has concluded with a plea having nothing to do with President Trump or the Trump campaign,” Giuliani said in a statement. “The reason: the President did nothing wrong and Paul Manafort will tell the truth.”

Then, he, as Second Nexus pointed out earlier today, changed his tune, omitting his earlier assertion that Manafort would "tell the truth": “The president did nothing wrong."

That statement opened Giuliani to criticism as well:

This nugget should not be overlooked. Expect Trump/Giuliani to begin to attack Manafort. But don’t forget that Giul… https://t.co/dhtMwvSv1n
— Daniel Goldman (@Daniel Goldman) 1536941769.0

"the President did nothing wrong and Paul Manafort will tell the truth" Giuliani said. Within minutes of Giuliani i… https://t.co/hRoEhKa7d0
— Rex Kramer® (@Rex Kramer®) 1536943434.0

A legal source who is supportive of the president and spoke to CNN on condition of anonymity said Trump's team does not believe Manafort has anything significant to share about the President with Mueller.

Prosecutor Andrew Weissmann called Manafort's plea agreement a "cooperation agreement," noting that other charges will be dropped at sentencing at "or at the agreement of successful cooperation."

Manafort's attorney, Richard Westling, agreed that the mistried accounts in Virginia from Manafort's trial last month––Manafort was found guilty on eight criminal counts, including bank fraud and tax evasion––will be dropped with Manafort's admission of guilt to all his allegations.

Manafort also had seven criminal counts in Washington, D.C., but prosecutors have agreed to rewrite them as two. They will drop the five remaining charges, which include money laundering, tax fraud, failing to disclose foreign bank accounts, violating federal foreign lobbying law and lying to the Department of Justice.