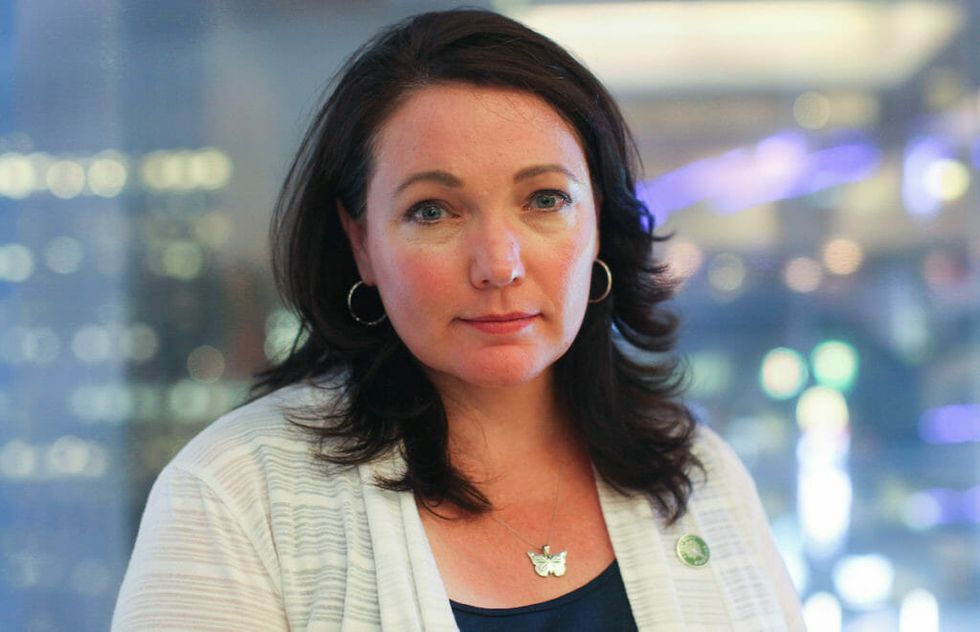 The mother of one of the 20 children killed in the 2012 Sandy Hook Elementary mass shooting in Newtown, Connecticut, who is also the founder and managing director of the Sandy Hook Promise, criticized President Donald Trump on Sunday for "appalling lack of humanity and decency" and for snubbing the families of the Sandy Hook victims.

Nicole Hockley, whose 6-year-old son Dylan was killed in the massacre, shared on Facebook that not only did Trump fail to acknowledge last Thursday's five-year anniversary of the Sandy Hook shooting -- "not even a single tweet" -- but that our president also invited National Rifle Association head Wayne LaPierre to a White House Christmas Party on the same evening.

“Not only did he ignore the five-year remembrance completely ― not even a single tweet ― he slapped us all in the face by having none other than NRA President Wayne LaPierre at his White House Christmas party that night. The appalling lack of humanity and decency has not gone unnoticed,” Hockley wrote in the Facebook post that went viral:

While they ignorantly partied and remained uninformed on an issue that kills thousands of Americans every year, I was crying myself to sleep. While they got the chance to kiss their children goodnight, I kissed the urn holding my beautiful boy’s ashes.

Hockley also criticized White House press secretary Sarah Huckabee Sanders on her handling of the anniversary. When asked about the Sandy Hook shooting and what President Trump and his administration are trying to do to prevent similar shootings, Sanders "remarked she was unaware of any regulation that could have been put in place to prevent anything." Hockley continues to say:

"This shows a remarkable amount of ignorance, especially regarding an issue that kills over 30,000 Americans every year. As the voice of the White House, Sanders should have not only offered condolences - or even thoughts and prayers - but she should know the answers."

A week after the Sandy Hook shooting, the NRA held a press conference at which executive vice president Wayne LaPierre, responding to the tragedy, blamed Hollywood and video games. He then implored the government to put more weapons in schools:

"I call on Congress today, to act immediately to appropriate whatever is necessary to put armed police officers in every single school in this nation."

Hockley feels that is the opposite of what is needed. In her post, she offered to educate the entire White House administration on preventative measures that do not require the escalation of armament:

"I will happily go the White House and train the administration on regulations like Extreme Risk Protections Orders (ERPOs) and Threat Assessment, both of which could have prevented the Sandy Hook tragedy and which I have written to the President about. I'd also love to train the White House on recognizing the signs of someone who is at risk of hurting themselves or others, or even about how to store a gun safely and responsibly. Both of these contributed to the Sandy Hook tragedy.

Hockley also requests that the White House issue a formal apology, but is uncertain anyone within the administration, including President Donald Trump, has enough heart to "understand why an apology is the least they could do."

The Sandy Hook Promise is a nonprofit that focuses on protecting children from gun violence.

Last month, Hockley and the other families of the victims of the Sandy Hook shooting progressed their lawsuit against weapon manufacturer Remington to the Connecticut Supreme Court. Their lawyers are arguing that the companies that manufactured and sold the assault rifle used by the gunman in the shooting share responsibility for the deaths of the 26 victims, including 20 children. This is the furthest any case of its kind has managed to get in seeking justice from those who make and sell military-style weapons to civilians.