Seriously, that's all you got? 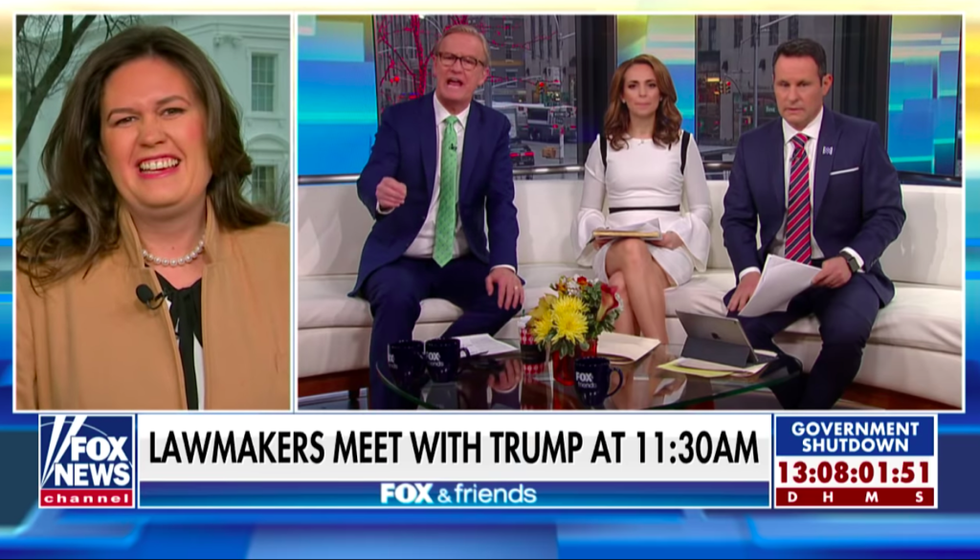 In advance of an 11:30am meeting between President Donald Trump and congressional leaders on Friday, White House Press Secretary Sarah Sanders attempted to lay the groundwork to shift blame for any continuation of her boss' shutdown of the government onto new Democratic Speaker of the House Nancy Pelosi (D-CA.)

Pelosi was reelected Thursday—after an eight-year break—to the Speaker's position in the House of Representatives. Pelosi is the only woman so far to ever serve in that capacity.

Sanders made an appearance on Fox & Friends to plead the President's case about his ill-advised and unpopular border wall. While poll after poll shows the majority of United States voters disapprove of the billions Trump's wall would cost, the President shut down the government to try to force congress to give him the billions he wants.

After Pelosi called a wall on our southern border "an immorality" on Thursday, Sanders went after Pelosi, saying:

"I wonder if she’s gonna go on a crusade and take down all the fences and walls across this country. I certainly hope not."

She continued, taking her argument to an absurd extreme.

"I’m sure that the people that have them around their homes, the institutions that have them—whether it’s the Vatican or anywhere else—are not gonna be real happy with the fact that Nancy Pelosi is calling their walls and their security ‘immoral'."

Although in a later conversation, Speaker Pelosi conceded she would allow a single dollar to go toward Trump's wall if it meant the eight cabinet departments and almost 800,000 workers not being paid could resume their mission.

Unfortunately for Sanders, her appearance on Fox & Friends failed to have the desired effect. It probably did not help with her alleged job search either.

People criticized the White House Press Secretary for her symbiotic relationship with Fox News as well as her habitual lying with easily disproven alternate facts.

She knows no other way. The daughter of a Baptist preacher went to a Baptist college and has been taught that ‘The… https://t.co/6OEyVglbJA
— LAMitchell (@LAMitchell) 1546624599.0

The House of Representatives passed several initiatives during their first session on Thursday to try to get the government working. It remains to be seen if the President and the Republican Senate also support putting federal workers back to work.