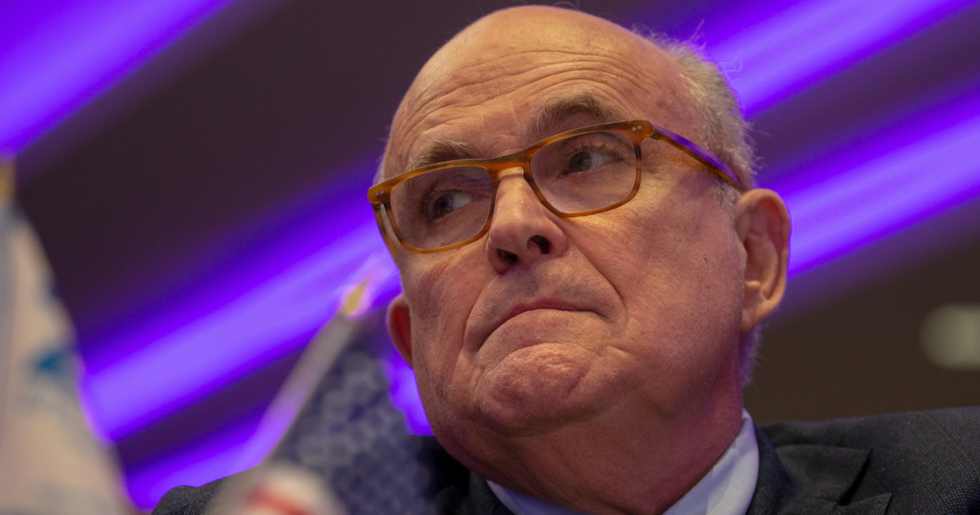 Rudy Giuliani on Tuesday slammed Twitter after someone turned an accidental link in one of his tweets into a website accusing President Donald Trump of treason.

Then an Internet hero proceeded to direct that link to a website that reads:

"Donald J. Trump is a traitor to our country."

But Rudy thinks it's Twitter's fault.

"Twitter allowed someone to invade my text with a disgusting anti-President message," complained Giuliani. "The same thing-period no space-occurred later and it didn’t happen. Don’t tell me they are not committed card-carrying anti-Trumpers. Time Magazine also may fit that description. FAIRNESS PLEASE."

Twitter allowed someone to invade my text with a disgusting anti-President message. The same thing-period no space-… https://t.co/n4nwHT71fB
— Rudy Giuliani (@Rudy Giuliani) 1543971205.0

As you might expect, folks on Twitter have been mercilessly mocking Giuliani, whom Trump put in charge of "the cyber", for not understanding how Twitter -- or the Internet for that matter -- works.

Rudy Giuliani accidentally tweeted a domain. Someone bought that domain and wrote that Trump is a "traitor." Giuli… https://t.co/m49JwtSoDg
— Ben Collins (@Ben Collins) 1543972961.0

Some time today, the personal lawyer of the @potus will realize that the missing space in his tweet meant he create… https://t.co/majUa6xzM3
— Alex Howard (@Alex Howard) 1543867310.0

"The accusation that we’re artificially injecting something into a tweet is completely false,” the company told the New York Times.

Tweets cannot be edited by anyone once they are posted.

Giuliani allowed this to happen, though. The former New York City mayor unintentionally typed a link into a tweet last Friday.

Some time today, the personal lawyer of the @potus will realize that the missing space in his tweet meant he create… https://t.co/majUa6xzM3
— Alex Howard (@Alex Howard) 1543867310.0

Jason Velasquez, an Atlanta digital marketing director, decided to buy the domain G-20.In into which he wrote: "Donald J. Trump is a traitor to our country."

“I kind of chuckled a little bit that he created this accidental link,” Velasquez told The Washington Post. Velasquez “knew immediately that it was just a typo" but since Twitter creates a working link from any legitimate domain, Velasquez seized the opportunity to air a grievance.

“I wanted something . . . bold,” he said. “Certainly, something that [Giuliani] would not want to be linked from his tweet.”

Instead of deleting and correcting the tweet, however, Giuliani left it up. It has since gone viral. By Wednesday morning, Giuliani's tweet had been shared more than 17,000 times.

Giuliani's Twitter gaffe “speaks to the impulsive nature of the administration where they’re not thoughtful in anything they put out there, especially on Twitter," Velasquez said. He added that even if Giuliani were to delete the tweet, he still wins.

Velasquez told the New York Times he was shocked that the tweet had been left standing.

“He could have deleted it and everyone would have forgotten about it, my tweet would have stopped going viral,” he said. “Instead he tweeted about it and created a conspiracy theory against Twitter.”

The New York Times noted that Giuliani's “period no space” complaint is irrelevant because "Helsinki.Either," Giuliani's other space-skip, is not a working domain.

The addition contains a hyperlink to a Reddit thread about ex-National Security Advisor Michael Flynn, whose sentencing memo was released Tuesday night.