We Now Know What Investigations Republicans Fear Democrats Will Initiate If They Gain Control of Congress, and the List Is Long 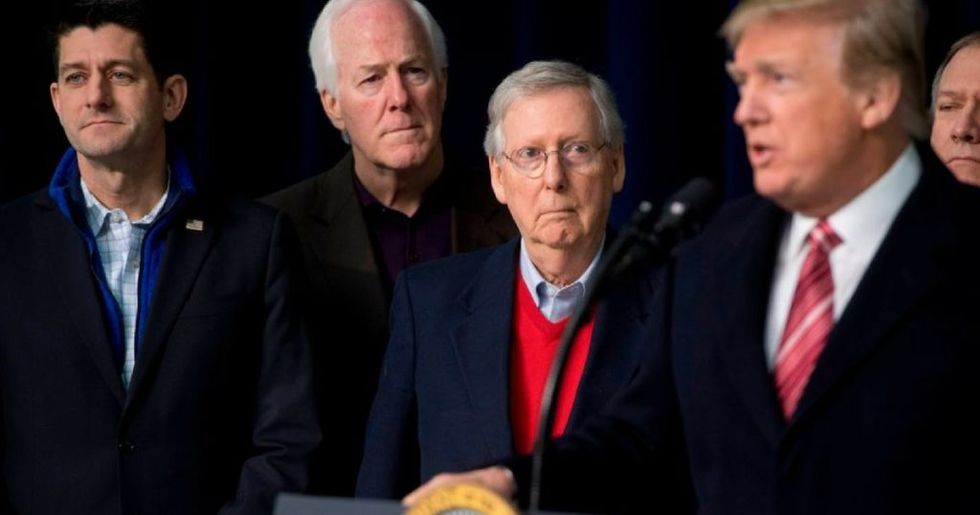 Republicans in Congress have been notoriously MIA in their oversight of the Trump administration, especially considering how many scandals have emanated from the White House in such a short period of time.

But it appears those very same Republicans are well aware of what scandals are worthy of Congressional investigation, as this list of potential investigations uncovered by Axios reveals.

The list has reportedly been circulating in Republican circles in an effort to brace the party for what could lie ahead after the November elections.

"Axios has obtained a spreadsheet that's circulated through Republican circles on and off Capitol Hill—including at… https://t.co/f1GUK1KqZv
— Ryan Goodman (@Ryan Goodman) 1535317953.0

One particularly telling part of the Axios piece:

.@jonathanvswan: "Lawyers close to the White House tell me the Trump administration is nowhere near prepared for th… https://t.co/hbGWzBFcMm
— Ryan Goodman (@Ryan Goodman) 1535318578.0

As HuffPost's Matt Fuller puts it:

The list is made up of various scandals of which house Democrats have already requested an examination, but Republicans have exercised their hold over the legislature to block the inquiries. Should Democrats take back the legislative branches, they would likely have the momentum to proceed.

The list is fraught with possible scandals from President Donald Trump's White House. Some--like security clearances, the firing of James Comey, Trump's family businesses, and possible conspiracy with Russia--have been widely discussed in American media. Others, like the ban on transgender service members in the military, action's in the aftermath of the Hurricane in Puerto Rico, the firing of U.S. attorneys, and other possible offenses could be under scrutiny.

Many on Twitter are unsatisfied at GOP leadership's failure to take these scandals seriously.

@rgoodlaw @MalcolmNance @axios This list must be made public so the people csn use their voice against this congres… https://t.co/W6j4c8zQcF
— Debra Weir (@Debra Weir) 1535379338.0

@rgoodlaw @axios Don't Republicans want to know the truth about these issues? They're supposed to work for the people, not Trump.
— Saint Veritas (@Saint Veritas) 1535369905.0

@rgoodlaw @axios And to the Republicans, WHY IN THE HELL AREN'T YOU INVESTIGATING THESE ITEMS? ISN'T THIS SUPPOSE… https://t.co/ApNcUqlh1C
— Rob#NotMyPresident (@Rob#NotMyPresident) 1535322619.0

The spreadsheet reportedly contains over 100 possible investigations, most of which Democrats have already requested be made. To many, it's no surprise that the list should be so long. The Trump White House has been inundated with scandals since inauguration day.

One of the foremost scandals of Trump's White House is his business dealings, which he seems to still be profiting from since his inauguration. The Trump International Hotel in D.C. has been the subject of much scrutiny after repeatedly hosting foreign diplomats. The patronage of the hotel by leaders from at least five countries has led some to call for an investigation into his possible violation of the emoluments clause. One lawsuit regarding this is slated to proceed.

Another possible investigation is the use of private email accounts in conducting government business. This is woefully ironic, considering that a hallmark of Trump's 2016 campaign was Hillary Clinton's use of a private email during her tenure as Secretary of State. While Republicans and Democrats jointly requested additional information into the use of the emails last year, the information hasn't been made available despite multiple requests for additional information from Democrats.

Few seem to deny that when it comes to scandals, this swamp has a lot of draining to do.

While many believe that Republicans should already be investigating these multiple violations out of concern for the country and willingness to perform their responsibility of executive oversight. This can no longer be relied upon, so it's no wonder that--should a blue wave occur--Democrats will take it upon themselves to bring these investigations to fruition.