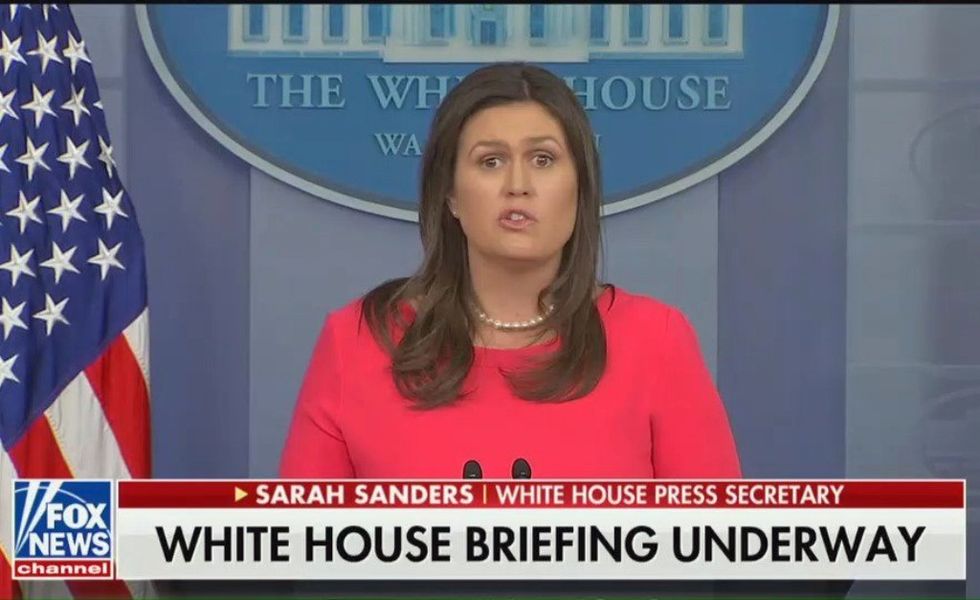 On an already rough day for White House Press Secretary Sarah Huckabee Sanders, things only got worse. After being unable or unwilling to answer multiple questions, reporters from competing press outlets, NBC's Hallie Jackson and The Hill's Jordan Fabian banded together when Sanders tried to block Jackson's follow-up question.

Jackson's original question, which Sanders talked over and failed to directly address or answer, concerned the credibility of a president constantly having to have his words reversed or reworded or reinterpreted to create a meaning different than the one everyone heard.

In a clip of the question, Sanders becomes increasingly annoyed and eventually tried to deflect by immediately throwing the floor to a different reporter, Jordan Fabian. But Fabian threw the floor back to his colleague Jackson.

Jackson later thanked Fabian on Twitter to which he responded that he just extended "some professional courtesy." Then Fabian called for unity among the White House press corps.

Just extending some professional courtesy. All of us in that room are trying to do our jobs and it's important the… https://t.co/PxKRfswuoU
— Jordan Fabian (@Jordan Fabian) 1531943771.0

Sanders arrived 40 minutes late for the first press briefing at the White House since July 2. A lot happened since July 2.

On Wednesday, Sanders again appeared blindsided by the latest misstep by President Donald Trump in the Russian interference scandal that has plagued his administration since before he took office. That Wednesday afternoon misstep, after everything that occurred before it, may explain Sanders's tardiness to her own briefing.

During a cabinet meeting Wednesday, Trump said "No," Russia was not still engaging in cyber attacks on the United States or attempting to meddle in U.S. political affairs, in direct contradiction to his own national security advisors.

And then Press Secretary Sanders had to try to offer a positive spin on the comment in that afternoon's press briefing. Her response, that the President was answering a question no one asked instead of the only question audible in the video, from Cecilia Vega, failed to gain traction.

Asked about Trump's bizarre comment earlier Wednesday that Russia is no longer targeting the US, Sanders walks it b… https://t.co/nS2u2sLQfg
— Aaron Rupar (@Aaron Rupar) 1531939522.0

Getting a lot of questions about my exchange with @realDonaldTrump today. Yes, he was looking directly at me when h… https://t.co/uIPtkM8wvu
— Cecilia Vega (@Cecilia Vega) 1531943656.0

The President's contradiction of U.S. intelligence sources drew such attention because of the events between July 2 and Sander's July 18 press briefing. Namely, a trip to a NATO meeting, the United Kingdom and a closed door private meeting with Russian President Vladimir Putin.

On Sunday, the President tweeted that the United States' "foolishness" and "stupidity" were the cause of strained relations with Russia. The Russian government's official Twitter account retweeted Trump with the message "We agree."

On Monday, after a closed door meeting with Putin in Helsinki, Finland, the President made several remarks in a joint press conference with the Russian leader that drew heavy criticism. The President backed Putin's very "powerful" denial of any Russian involvement over the United States' own intelligence agencies evidence of Russian interference in the 2016 presidential election.

Those comments, among others, led political commentators, foes and former allies alike to call his performance "disgusting," "exceeding the threshold for high crimes & misdemeanors" and to call the President a "traitor."

Arriving home Monday night, Trump's Tuesday agenda included reading from a prepared statement to try to backpedal on his Tweets and Helsinki comments, during which the White House suffered an oddly timed power outage. At the end of his written remarks, however, the President again went off script and cast doubts on the validity of U.S. intelligence reports released just the day before.

Then Wednesday, Trump again directly contradicted the Monday report of his own hand-picked Director of National Intelligence, Dan Coats. Coats stated Russia had definitively meddled in the 2016 elections and continued to pose an ongoing and serious threat.

Then came the press briefing. Many times, Sanders found herself unable to answer questions. But her usual bullying style of handling the press failed to work this time when Jackson and Fabian teamed up to get an answer.

And people are calling for more of the same.

Often accused of constant lying for or about her boss, President Donald Trump's current press secretary faces a lot of criticism among the press corps and in the court of public opinion. Sanders even finds herself with fewer options for places to eat because of general public contempt over her statements during White House press briefings.

If the press gets organized, things will only get more difficult for Sanders.