Omarosa Revealed Secret Recordings She Made of Trump and White House Staff, and People Are Divided

"Only the best people," right? 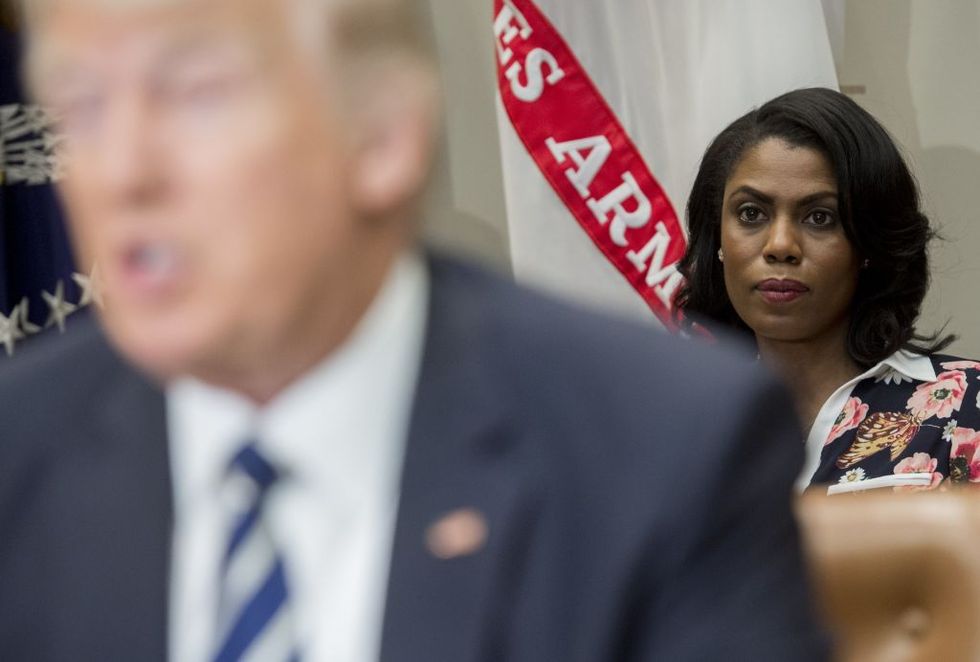 Omarosa Manigault (R), White House Director of Communications for the Office of Public Liaison, sits behind US President Donald Trump as he speaks during a meeting with teachers, school administrators and parents in the Roosevelt Room of the White House in Washington, DC, February 14, 2017. / AFP / SAUL LOEB (Photo credit should read SAUL LOEB/AFP/Getty Images)

As if her upcoming memoir, Unhinged, didn't shake things up in Washington enough last week, Omarosa Manigault Newman alarmed allies and critics alike when she played secret tapes recorded by her during her time as a White House aide.

It's a stunning reversal from one of President Donald Trump's foremost allies for over a decade. To the shock of many, at least one of the recordings––which appears to show Chief of Staff John Kelly firing her––was made in the Situation Room and could represent a huge breach of security.

The tapes appear to prove that Chief of Staff John Kelly fired her––contrary to the White House's initial statement on the matter––and what's more, appear to show that Donald Trump was not made aware of the decision, with Kelly asserting that "the staff and everyone on the staff works for me, not the President."

Now, Donald Trump is leaping to discredit Manigault Newman on Twitter, continuing his common attack of referring to black people as unintelligent.

Manigault Newman claims that her tapes are by far not as damning to the president as others in existence. The former Trump ally and season one contestant of The Apprentice claims to have heard recordings of Donald Trump repeatedly using the N-word.

The fact that the tapes of her conversations with Kelly were recorded in the first place is, to many, more distressing than their actual content.

let her sell her books on “The View” However, when she has tapes from the Situation Room, that is news because it r… https://t.co/Ah0DPtZuiV
— Jennifer Rubin (@Jennifer Rubin) 1534107032.0

Some are attributing the breach to Manigault Newman's disregard for protocol:

Without question, @OMAROSA should be pursued to the full extent of the law for her flagrant violation of White Hous… https://t.co/mpMNzrrVZV
— Candace Owens (@Candace Owens) 1534093887.0

@townhallcom She should be arrested for recording conversations in the White House. How troubling.
— Dannak (@Dannak) 1534140196.0

Some feel the sloppiness of the White House shares more of the blame.

Set aside that Omarosa recorded a conversation in the Sit Room. Why was she there in the first place? Why did John… https://t.co/a4SHeMfwzB
— Ned Price (@Ned Price) 1534087817.0

The departure of Manigault Newman from Trump's White House in December 2017 was among the more notable in an administration fraught with unprecedented staff turnover rates. Her tapes are already contradicting narratives in a story that was constantly updated in the weeks after it happened.Manigault Newman's departure from the White House was an ever-changing story when the news initially broke.

Omarosa Manigault Newman resigned yesterday to pursue other opportunities. Her departure will not be effective until January 20, 2018. We wish her the best in future endeavors and are grateful for her service.

Hours later, White House Correspondent April D. Ryan cited multiple sources when reporting that Manigault Newman was not only fired, but that the departure was anything but amicable.

According to multiple sources Omarosa did not resign. She was even escorted out of he building and off campus.
— AprilDRyan (@AprilDRyan) 1513179172.0

Sources say General Kelly did the firing and Omarosa is alleged to have acted very vulgar and cursed a lot and said… https://t.co/wrkLKytxzz
— AprilDRyan (@AprilDRyan) 1513179046.0

But the White House still insisted that Manigault Newman signed a resignation letter.

However, New York Times Reporter Yamiche Alcindor reported that, while Manigault Newman was indeed fired, other sources claimed her departure wasn't as dramatic as originally reported.

I just talked to another source in the White House who said Omarosa will be on staff until January 20 and that she… https://t.co/PzA2uu6xit
— Yamiche Alcindor (@Yamiche Alcindor) 1513186690.0

Interestingly enough, Ryan recently tweeted Manigault Newman to imply that the former aide could be in legal hot water.

While the contentious tapes are sure to increase sales of Manigault Newman's upcoming book, it's unclear whether she or the administration she's turned against will be more damaged by their release.