Michelle Obama Slams Donald Trump in Her New Memoir, Explains Why She 'Would Never Forgive Him' 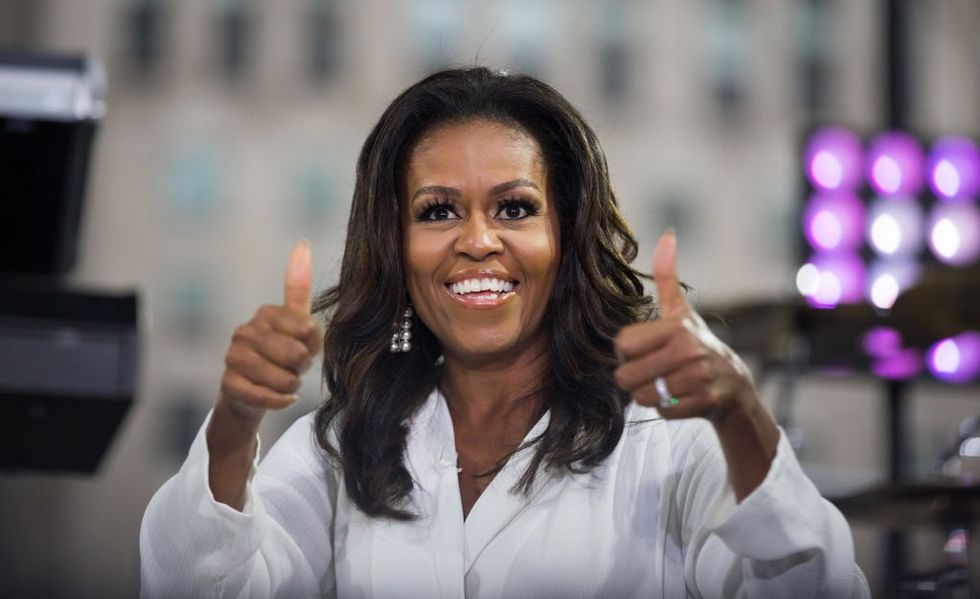 In an advance look at Michelle Obama's new book, Becoming, The Washington Post revealed how the birtherism movement affected the Obama family. Birtherism—pushed by White supremacists in response to the first non-White President of the United States—gained traction when prominent media personalities jumped on board.

Two of those media personalities to publicly embrace, endorse and promote the racism based birtherism narrative were President Donald Trump and First Lady Melania Trump.

For that, Michelle Obama stated she could never forgive Trump. She wrote:

"What if someone with an unstable mind loaded a gun and drove to Washington? What if that person went looking for our girls?"

"Donald Trump, with his loud and reckless innuendos, was putting my family's safety at risk. And for this I'd never forgive him."

The recent pipe bomb headed for former President Obama as well as other critics or rivals of President Trump prove the former First Lady had reason to fear. The so-called MAGAbomber is proof of the cult of personality Trump commands and the harm of his rhetoric on an unstable mind.

TBH this guy's Twitter feed isn't meaningfully different from those of millions of Trump followers. I could find… https://t.co/kbCGhHNHud
— Rick Wilson (@Rick Wilson) 1540571512.0

The parties involved in the birtherism movement ignored the fact that regardless of where Barack Obama was born—which was Hawaii which is part of the United States—his mother was a United States citizen.

No one suggests that Trump is a perpetrator, but pipe bombs as a tool of political intimidation do not arrive unexp… https://t.co/Xgut0ytHSV
— The New Yorker (@The New Yorker) 1540644631.0

Melania Trump was an appalling birtherist bully too like Trump. Michelle Obama says she'll never forgive Trump for… https://t.co/wpy36yTuRJ
— Orrite Then (@Orrite Then) 1541773183.0

@kylegriffin1 Michelle O suffered so much because of Trump and Melania with the Birtherism conspiracy they spread.… https://t.co/EvWDIeN7PF
— Mary Rose (@Mary Rose) 1541771517.0

Previously, White presidential candidates like George Romney—despite being born outside of the United States—caused no such call of not being legitimate candidates from White nationalist organizations. Later, Ted Cruz would also run for President based on his mother's status as a United States citizen at the time of his birth in Canada.

But so-called birthers pushed to delegitimize Barack Obama as President, claiming he was born in Kenya, the country of his father's citizenship.

Trump used his Twitter following and media appearances and interviews to push the White nationalist started debate over the country of President Barack Obama's birth. Beginning in 2012 and ending in 2014, Trump tweeted false statements about President Obama's birth certificate 23 times.

In them, Trump claims "very credible sources" told him Obama's birth certificate is fake. Again, this completely ignores Obama being eligible to be President based on his mother's citizenship and Obama's own United States citizenship.

Trump failed to ever produce any of his "highly credible sources."

Eventually Trump changed his narrative to taking credit for forcing Obama to show his birth certificate, while still casting aspersions on its authenticity.

An 'extremely credible source' has called my office and told me that @BarackObama's birth certificate is a fraud.
— Donald J. Trump (@Donald J. Trump) 1344284580.0

Always remember, I was the one who got Obama to release his birth certificate, or whatever that was! Hilary couldn't, McCain couldn't.
— Donald J. Trump (@Donald J. Trump) 1404067377.0

"@futureicon: @pinksugar61 Obama also fabricated his own birth certificate after being pressured to produce one by @realDonaldTrump"
— Donald J. Trump (@Donald J. Trump) 1416783200.0

During the 2016 presidential campaign, Trump tried to downplay his role in the birtherism movement.