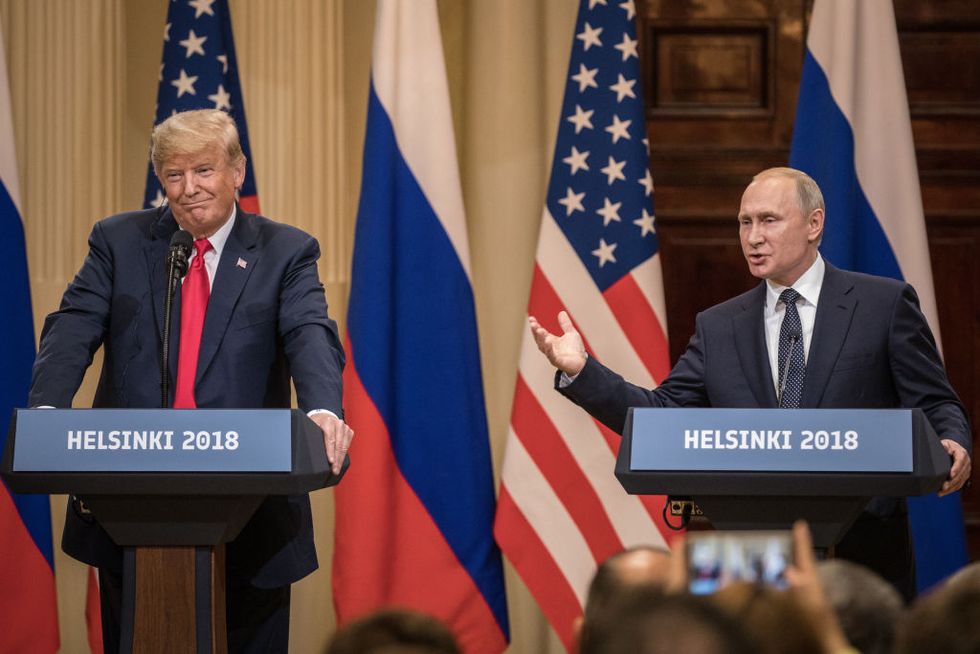 The New York Times is facing a significant backlash from the LGBTQ community after a video, titled "Trump and Putin: A Love Story," was posted to their website.

The video, advocates contend, reduces President Donald Trump's relationship with Russian President Vladimir Putin to little more than a gay joke rather than the flagrant abuse of power and threat to democracy that it––particularly after the president sided with Putin over the assessment from his own intelligence agencies that Russia interfered in the 2016 presidential election––genuinely is.

Many have taken the newspaper to task for its cartoon, which they believe is homophobic. One of them is Brian Sims, a gay Pennsylvania Congressman. Sims slammed the Times for "equating the love that countless people across the planet fight and die for to the unconscionably criminal relationship" between Trump and Putin.

Sims continued, pointing out that both leaders have used their power and influence to take away LGBTQ rights; indeed, President Trump has indicated that his Supreme Court nominations will give the nation's highest court a partisan bent which places landmark rulings like Obergefell v. Hodges––which made marriage equality the law of the land––at significant risk of being overturned; Putin, meanwhile, has allowed Russia's "gay propaganda" rule to flourish under his rule and has imprisoned LGBTQ activists for speaking out.

@pfpicardi This is ridiculous bullshit! Millions of LGBTQ people around this world risk their lives for love and th… https://t.co/zkEYiEGjGu
— Brian Sims (@Brian Sims) 1531752759.0

According to social media user Nick Amadeo, "homophobic taunting" is used against the two world leaders "to put both of them down and emasculate them," a sign that publications like the New York Times still see homosexuality as shameful.

@nytopinion My thoughts on this, since Twitter doesn’t give me enough space to voice my reaction. If you’re going t… https://t.co/Fdltcd6PaU
— Nick Amadeo (@Nick Amadeo) 1531779235.0

Others weighed in with similar thoughts.

@nytopinion The NYT resorts to crude homophobic propaganda to attack the US president. Yes, this is the state of US… https://t.co/CTVWSdVU8u
— Polly Tickal (@Polly Tickal) 1531801409.0

@nytopinion This fiction detracts from the damning truth. It demeans journalism and @TNYTimes rather than the subje… https://t.co/C5Ud0dRRyc
— Sunni (@Sunni) 1531803780.0

The Times video is a response to statements President Trump made during a press conference after meeting with Putin in the Finnish capital of Helsinki. Trump, who has often demeaned the intelligence community and has insisted that Special Counsel Robert Mueller's investigation into Russian election interference is little more than a partisan "witch hunt," said he doesn't "see any reason" why Russia would have meddled in the 2016 presidential election.

The press conference dominated the news cycle. This was quite the feat, particularly when Trump’s earlier comments undermining the European Union––he named the E.U. when asked to identify his “biggest foe globally right now”––exacerbated tensions during an already chaotic week for international diplomacy.

The president's comments are especially alarming given what we’ve learned from an indictment that the Justice Department released Friday afternoon. The indictment reveals that, in 2016, Russian operatives attempted to hack Hillary Clinton’s private email server––the same day that Trump infamously requested that the Russians do just that.

Putin, for his part, described the Helsinki meeting as “candid and useful.”

When asked to elaborate on whether tensions between the U.S. and Russia––tensions which have only heightened since Moscow invaded Ukraine and annexed Crimea in 2014––would ease, Putin appeared optimistic.

“President Trump’s position on Crimea is well known. He talks about the illegality of the Crimean reintegration to Russia. We have another point of view… that a referendum was held in accordance with international law. For us, it’s a closed question,” he said.

The president's warm relationship with Putin has quite often made him the target of gay jokes like the one the New York Times has now come under fire for, and the backlash has only intensified each and every time jabs of this nature go viral. There's plenty to criticize President Trump for––his praise for dictators, his stoking of racism, nativism, and nationalism; his penchant for lying regularly without abandon––but insinuating that his behavior toward Putin masks a discreet homosexual relationship is the stuff low blows are made of, and these same attacks cheapen the plights of real people who stand to lose everything should the president's attempts to appease his evangelical base and codify his legislative agenda prove successful.

For proper criticism of the president's actions, one need look no further than individuals like former Congressman Joe Walsh, who announced that he’d officially broken away from the man whose presidency he’d once so fervently supported.

“I cannot & will not support a traitor,” Walsh wrote in a message posted to his Twitter account.

Although Walsh had criticized President Trump a fair amount in recent months, it was a startling about-face for a man who once called for armed insurrection in the event Trump lost the presidential election to Hillary Clinton, his Democratic opponent.

I never thought I would see the day when our American President would stand on the stage with the Russian President… https://t.co/qwqtrGT6pU
— Jeff Flake (@Jeff Flake) 1531757642.0

Amid the controversy over Trump's press conference––an event which gave life to Twitter hashtags like #TreasonousTrump––it emerged that the Justice Department had charged Mariia Butina, a Russian national who tried to broker a secret meeting between Trump and Putin during the 2016 presidential campaign. Butina, notes the New York Times, "is the 26th Russian — and the first one arrested — to face charges related to interference in the presidential election."