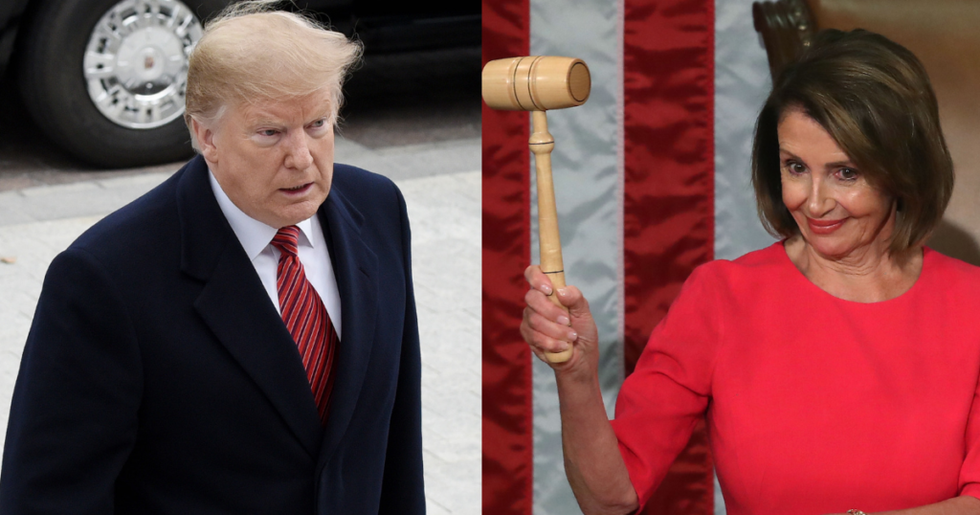 After House Speaker Nancy Pelosi (D-CA) requested in a January 16 letter to President Donald Trump that he reschedule his January 29 State of the Union for a later date, citing security concerns and the government shutdown, the President responded with a letter of his own.

After cancelling her planned congressional delegation abroad, he informed her he'd be making the address on the 29th anyway.

Hours later, Pelosi responded with a clarification that the original suggestion was no longer a request.

This afternoon, I sent @realDonaldTrump a letter informing him that the House will not consider a concurrent resolu… https://t.co/sgGPgZ2Cbb
— Nancy Pelosi (@Nancy Pelosi) 1548274656.0

"I am writing to inform you that the House of Representatives will not consider a concurrent resolution authorizing the President's State of the Union address in the House Chamber until government has opened."

As Speaker of the House, Pelosi has complete authority to disinvite the President from speaking on the House floor. She clarified, however, that the President was more than welcome to appear in front of Congress on a mutually agreeable date after the longest government shutdown in American history ends.

Pelosi had previously insisted that the Democrats would not give in to Trump's demands for $5 billion to build a wall on the southern border, insisting that he would continue using government shutdown for political leverage in the future.

The President assured reporters that his administration would be responding to the letter in a timely manner.

While the President may think Pelosi's move is a "shame," Americans on Twitter have been applauding it.

@SpeakerPelosi @realDonaldTrump You are a powerful example of many to stand up to bullies, thank you Speaker Pelosi!
— Blake H. (@Blake H.) 1548274716.0

They're also giving her a firm instruction.

Americans are warning her not to back down.

@SpeakerPelosi @realDonaldTrump I live in a household directly affected by the shutdown. It is hard and stressful.… https://t.co/mnP2K2lYYo
— Angela Benander (@Angela Benander) 1548274848.0

@SpeakerPelosi @RedTRaccoon @realDonaldTrump Do not give one inch on anything. We must take our nation back.
— Andrew J. Sacks (@Andrew J. Sacks) 1548274808.0

Their reactions to Trump's response are decidedly colder.

@ABCPolitics By radicalized does he mean united against his incompetence and corruption. I guess he’s right
— Jacqui (@Jacqui) 1548274354.0

Pelosi's latest letter puts even more pressure on Trump to reopen the government and end the shutdown he said he'd be "proud" to enact.