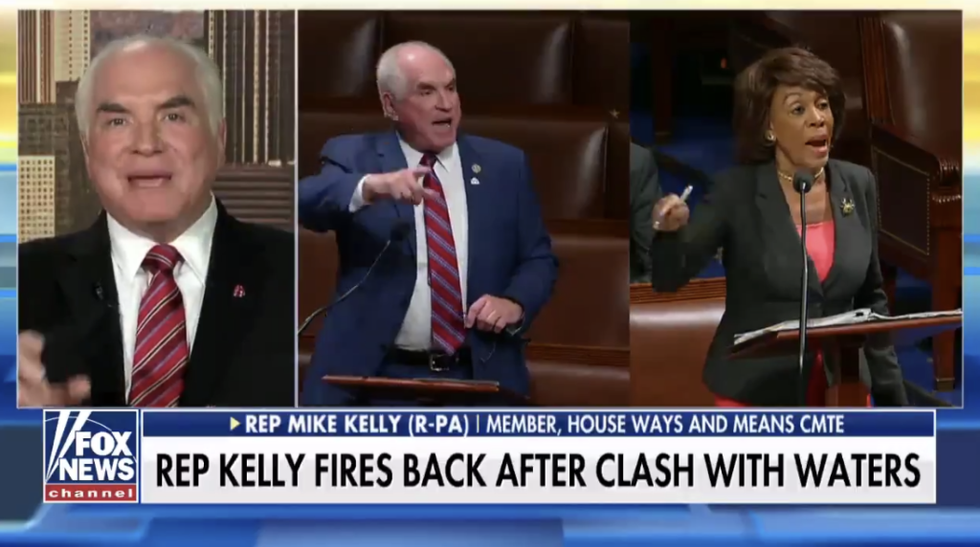 Host Brian Kilmeade pointed out that studies have shown that there are inequities in the practices of auto lending.

Kelly called the studies flawed and defended industry practices, saying that creditworthiness has nothing to do with the color of one's skin.

When you try to determine creditworthiness, creditworthiness is built in your credit history. There's the 5 C's in banking, the 4 C's, the 3 C's; none of those C's, by the way, has anything to do with color. The color of a person's skin has nothing to do... but the content of their character does. That is Dr. Martin Luther King, not me.

Kelly continued by saying that Democrats in the House lined up to berate auto dealers and "automobile people," whom he claimed to "know so well" and "love so well and have worked with for so long."

Kelly referred to Waters' assertions as "preposterous," telling Kilmeade that with Waters, "everything has got to come down to discrimination," which he said is a means of dividing people.

If we can't get away from this divisive type of talk, we cannot come together as a nation. That's horrible. It's totally unacceptable.

Last week, Waters and Kelly butted heads on the House floor after Republicans rescinded an Obama-era rule that was designed to stop racial and gender discrimination by American automakers. The two congresspeople then exchanged jabs, culminating with Waters refusing to yield the floor to Kelly after he demanded it.

“How in the world can you reduce this down to discrimination?" Kelly asked. “We are trying to make sure that we make America great every day in every way. And the best way to do that is to stop talking about discrimination and start talking about our nation. We're coming together as a people in spite of what you say." Outside of Congress, Kelly owns car dealerships, which may explain his knee-jerk reaction to accusations of discriminatory lending practices in his industry.

Waters, unwilling to be mansplained on the merits of discrimination, fired back.

I want you to know that I am more offended as an African-American woman than you will ever be. And this business about making America great again, it is your president that is dividing this country… And don’t tell me that we don’t understand [about discrimination], that is the attitude that has been given about women time and time again.

Don’t you dare talk to me like that and think that somehow women don’t understand what goes on on the floor of automobile dealers.

Kelly then demanded Waters yield her time to him, which didn't go over well.

And no, I do not yield one second to you, not one second.

Twitter exploded in response to Kelly's comments, which underscore the very type of discriminatory behavior Waters railed against last week.

@funder So embarrassed that Mike Kelly is my congressman. He is a bully and a bigot. Congresswomen Walters, my te… https://t.co/m0qf4aZlFK
— Jane Harper (@Jane Harper) 1526008905.0