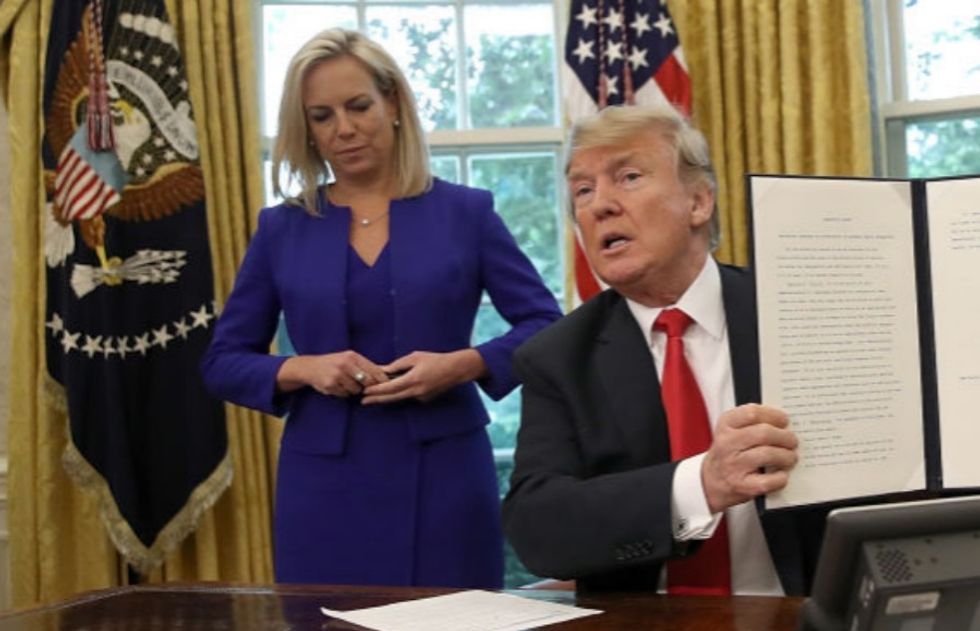 U.S. President Donald Trump, accompanied by Department of Homeland Security Secretary Kirstjen Nielsen displays an executive order he signed that will end the practice of separating family members on June 20, 2018 in Washington, DC. The order would detain parents and children together. (Photo by Win McNamee/Getty Images)

A political cartoon titled Rescue Effort Still Underway to Save Boys Trapped in America by artist Pia Guerra is making the rounds on social media. Guerra's image, depicting child detainees in the United States watching the rescue of children in Thailand on TV, was first posted on Twitter by The Nib.

The Vancouver based artist "does editorial cartoons for relaxation and retribution."

The powerful images which feature the same little boy watching television struck a chord with the public, both times they were heavily used, first in 2014 and again in 2018.

News media looked for relevant images for stories covering President Donald Trump's zero tolerance policy for everyone entering the US without prior authorization. The policy, enacted by Attorney General Jeff Sessions and enforced by Homeland Security head Kirstjen Nielsen, eventually lead to almost 3,000 children being separated from their families.

But no photos of the Trump administration's child detainees were available because the media was not initially allowed into detention centers. So the photos from 2014 were resurrected.

A boy from Honduras watches a movie at a detention facility run by the U.S. Border Patrol on September 8, 2014 in McAllen, Texas. The Border Patrol opened the holding center to temporarily house the children after thousands of unaccompanied minors from Central America crossed the border illegally into the United States during the spring and summer. (Photo by John Moore/Getty Images)

But regardless of the story behind the photos, they etched themself into the minds of many. They  bear a strong resemblance to Guerra's cartoon. Except now there are many more children in the picture, both in the cartoon and in reality. Child detention centers experienced extreme overcrowding after Trump's zero tolerance policy went into effect.

Author Colin Dickey addressed why people in the United States followed the story from Thailand so closely, suggesting people had made parallels in their own minds between two sets of children half a world away from each other.

...kids in the Thai cave has become, for US media, a repressed proxy for Trump's child separation policy. People want a feel-good story about kids being rescued where the villain is nature, so they don't have to acknowledge how America's border tragedy is manmade[sic]."

Sure I want those kids rescued from that cave too, but the focus on that story considering all else that's going on… https://t.co/pFVzFHs5KG
— Starting to Turn (@Starting to Turn) 1531143477.0

Reaction to Guerra's cartoon is partly linked to the immediate recognition and reaction to the now familiar photos of the child in a cage watching TV as well as current images of overcrowded child detention facilities with children huddled on floors.

But it's also due to recognizing being distracted by children in peril in another part of the world where there can be heroes and the villain is identifiable and the answers are easy.

People reacted directly to the initial posting of the cartoon by The Nib, but also shared it with their own messages.

@DioxaV @thenib @PiaGuerra Unfortunately, the light at the end of this tunnel is the headlight on a runaway freight… https://t.co/TQ9mx0lQlp
— Cappy (@Cappy) 1531182856.0

A wholly arresting, powerful cartoon from @PiaGuerra at @thenib, which is launching a Kickstarter for a print magaz… https://t.co/uHgNZHKbgY
— Dominic Umile (@Dominic Umile) 1531314460.0

The effort to reunite detained children in the United States with their families continues.