Bette Midler Just Posted a Doctored Photo of a Whole New 'Hocus Pocus' Cast Getting Revenge on Donald Trump, and Everyone Is On Board 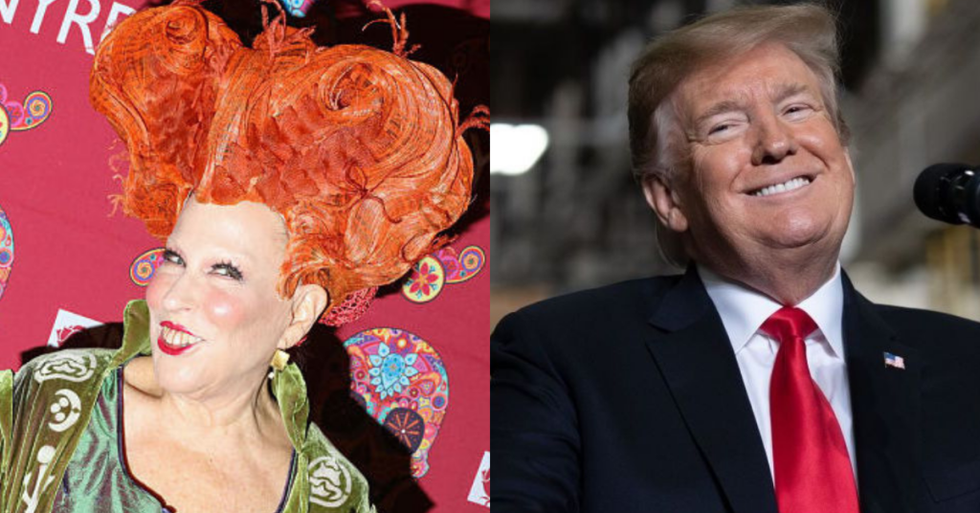 If you grew up in the 1990s, you probably saw the perennial Halloween favorite Hocus Pocus. The Disney film directed by High School Musical juggernaut genius Kenny Ortega and starred icon Bette Midler beside Sarah Jessica Parker of Sex and the City fame and Kathy Najimy of Sister Act as the evil Sanderson sisters, a trio of resurrected witches in Salem, Massachusetts.

Since the film's 1993 debut it developed a cult following. Now Midler has banked on that popularity to poke a little fun at one of her favorite Twitter foils, President Donald Trump.

Midler shared a Hocus Pocus scene updated for 2019. Midler retains her role of Winifred Sanderson, but in place of Parker and Najimy are Kathy Griffin as Mary Sanderson and Stormy Daniels and Sarah Sanderson.

She captioned the photo:

"Sisters!! @kathygriffin @StormyDaniels, It's been three hundred years, Right down to the day, Now the witches are back, And there's h*** to pay!"

Sisters!! @kathygriffin @StormyDaniels It's been three hundred years Right down to the day Now the witches are back… https://t.co/8Fp9XG2GVZ
— Bette Midler (@Bette Midler) 1560201969.0

The ladies were thrilled to be in the Divine Ms M's company.

While @BetteMidler is an extremely unattractive woman, I refuse to say that because I always insist on being politically correct.
— Donald J. Trump (@Donald J. Trump) 1351439949.0

His most recent attack came on June 4 where he referred to the award winning singer and actress as a washed up psycho.

Washed up psycho @BetteMidler was forced to apologize for a statement she attributed to me that turned out to be to… https://t.co/G1qLRLvFZN
— Donald J. Trump (@Donald J. Trump) 1559694655.0

Midler dishes it back though.

Dear @realDonaldTrump, So sorry I missed your call! I was hoping to finish our conversation about removing single u… https://t.co/qGlZ8k8tFI
— Bette Midler (@Bette Midler) 1559778334.0

I want to thank everyone who came to my defense last night during my personal Battle of the Bulge with he who must… https://t.co/GC7yNKqOyq
— Bette Midler (@Bette Midler) 1559744507.0

Midler's sense of solidarity with other women Trump targeted online repeatedly is understandable. Like the ever changing story of a $130,000 payment to Stormy Daniels.

...despite already having signed a detailed letter admitting that there was no affair. Prior to its violation by Ms… https://t.co/MvJNo3D9xM
— Donald J. Trump (@Donald J. Trump) 1525345214.0

And the feud with Griffin.

People were on board for Midler's post. Many added a few images of their own.

People asked for a sequel to the frightfully funny film for years. In February 2019, news broke that it may happen. And at least one fan is just fin with this as an alternate script.

Trump has yet to respond to Midler's message.