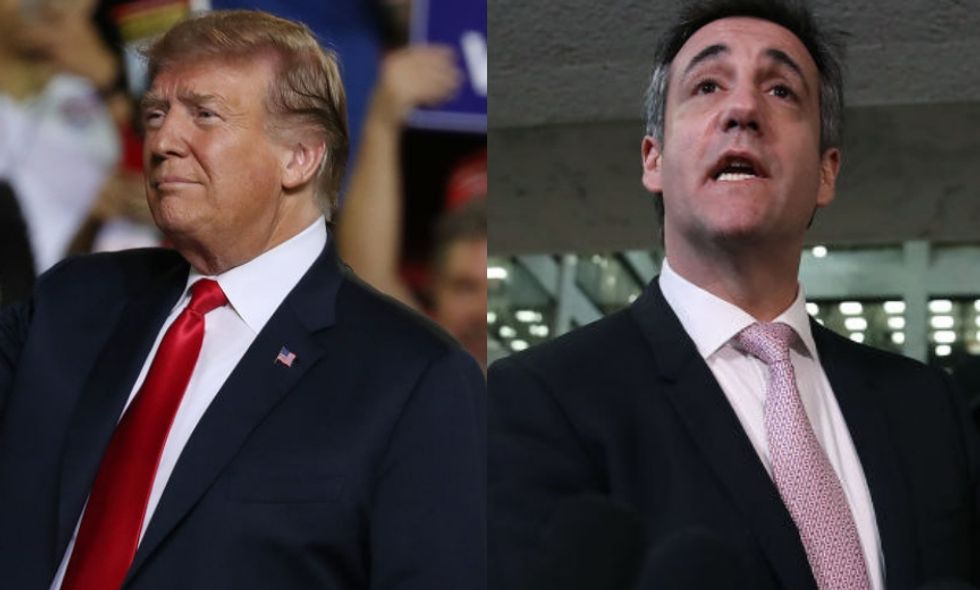 Late Tuesday night, the opening statement of the testimony Michael Cohen will give in front of the House Oversight Committee on Wednesday morning was published online. And it is simply a savage takedown of the President.

In it, Cohen makes clear his regret for having been loyal to Trump, saying:

I am ashamed because I know what Mr. Trump is. He is a racist. He is a conman. He is a cheat.

He goes on, confirming that Trump is in fact "Individual 1" in his guilty plea agreement:

Last fall I pled guilty in federal court to felonies for the benefit of, at the direction of, and in coordination with Individual #1. For the record: Individual #1 is President Donald J. Trump.

Donald Trump is a man who ran for office to make his brand great, not to make our country great. He had no desire or intention to lead this nation – only to market himself and to build his wealth and power.

On the question of whether Trump knew about Wikileaks' dump of the hacked DNC e-mails ahead of time, Cohen gives an unequivocal "Yes."

Although he stops short of saying he witnessed outright collusion between the Trump campaign and Russia, Cohen says he had his "suspicions."

For example, after a mysterious interaction between Trump and Don Jr., Cohen suspected that Trump was well aware of the Trump Tower meeting in which members of Trump's campaign team and family met with a representative of the Russian government with the intention of getting dirt on Hillary Clinton.

I recalled Don Jr. leaning over to his father and speaking in a low voice, which I could clearly hear, and saying: “The meeting is all set.” I remember Mr. Trump saying, “Ok good…let me know.”

Why was that suspicious?

Mr. Trump had frequently told me and others that his son Don Jr. had the worst judgment of anyone in the world. And also, that Don Jr. would never set up any meeting of any significance alone – and certainly not without checking with his father. I also knew that nothing went on in Trump world, especially the campaign, without Mr. Trump’s knowledge and approval. So, I concluded that Don Jr. was referring to that June 2016 Trump Tower meeting about dirt on 18 Hillary with the Russian representative when he walked behind his dad’s desk that day -- and that Mr. Trump knew that was the meeting Don Jr. was talking about when he said, “That’s good…let me know.”

On the subject of the Stormy Daniels payment, Cohen provides documentation for his claims.

He asked me to pay off an adult film star with whom he had an affair, and to lie to his wife about it, which I did...I am giving the Committee today a copy of the $130,000 wire transfer from me to Ms. Clifford’s attorney during the closing days of the presidential campaign that was demanded by Ms. Clifford to maintain her silence about her affair with Mr. Trump. This is Exhibit 4 to my testimony.

That is not the last of his exhibits, however:

As Exhibit 5 to my testimony shows, I am providing a copy of a $35,000 check that President Trump personally signed from his personal bank 14 account on August 1, 2017 – when he was President of the United States – pursuant to the cover-up, which was the basis of my guilty plea, to reimburse me – the word used by Mr. Trump’s TV lawyer -- for the illegal hush money I paid on his behalf.

And it was all done while Trump was president:

This $35,000 check was one of 11 check installments that was paid throughout the year – while he was President. The President of the United States thus wrote a personal check for the payment of hush money as part of a criminal scheme to violate campaign finance laws. You can find the details of that scheme, directed by Mr. Trump, in the pleadings in the U.S. District Court for the Southern District of New York.

Donald Trump's personal attorney and former New York Mayor Rudy Giuliani attempted to dismiss the preview of the testimony, which Cohen will give under oath.

Giuliani's dismissal didn't do too much for the President's innocence in the court of public opinion.

@PhilipRucker I too employ a Russian mob connected fixer whenever I want to have nothing to do with Russians and crimes
— Erase Rewind (@Erase Rewind) 1551248959.0

@PhilipRucker @maggieNYT Thanks for acknowledging the Prez’s personal lawyer had links to Russian organized crime, Rudes 👍
— BC (@BC) 1551248890.0