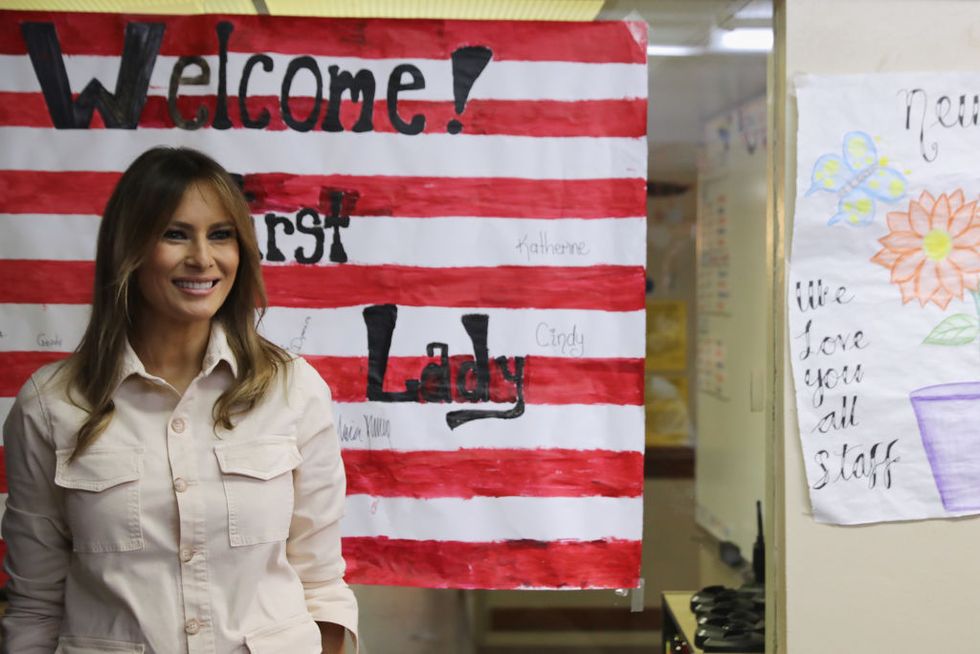 MCALLEN, TX - JUNE 21: U.S. first lady Melania Trump smiles after signing a welcome poster made for her after a round table discussion with doctors and social workers at the Upbring New Hope Childrens Center operated by Lutheran Social Services of the South and contracted with the Department of Health and Human Services June 21, 2018 in McAllen, Texas. The first lady traveled to Texas to see first hand the condition and treatment that migrant children taken from their families at the U.S.-Mexico border are receiving from the federal government. Following public outcry and criticism from members of his own party, President Donald Trump signed an executive order Wednesday to stop the separation of migrant children from their families, a practice the administration employed to deter illegal immigration at the border. (Photo by Chip Somodevilla/Getty Images)

Of all the jackets to wear, the First Lady went with this one.

Melania Trump wore a military jacket with the words “I really don’t care, do u?” while she boarded a plane to visit a detention center for immigrant children in McAllen, Texas.

The jacket, which previously sold for $39 at Zara, is now sold out. The First Lady's spokespeople soon pushed back against suggestions that the photo was doctored. The jacket is, in fact, real.

“It’s a jacket,” Stephanie Grisham, a spokesperson for Mrs. Trump, said. “There was no hidden message. After today’s important visit to Texas, I hope this isn’t what the media is going to choose to focus on.”

Why did the First Lady, a woman with the power to set fashion trends around the world and who has been noted for more sensible wardrobe choices in the past, wear such a jacket on the same day as her trip to a child detention center?

These questions––and more––irked many of Mrs. Trump's critics. One called the jacket an "unfortunate sartorial decision."

There was no “hidden message” because the message was right there for the whole world to see. https://t.co/Gkhs08IGfZ
— Renato Mariotti (@Renato Mariotti) 1529610212.0

"I want to thank you for your hard work, your compassion and your kindness," the First Lady said during a roundtable briefing at Upbring New Hope.

She was greeted by Upbring CEO Dr. Kirk Senske as well as doctors, medical staff, and social workers who work with the organization.

"We're honored to show you our shelter," Senske told the First Lady. "We treat them like our own children."

Mrs. Trump asked several questions, including how many times the children speak with their families, according to individuals who were at the roundtable. She was told twice a week, though an official noted that verification processes are in place to ensure the people the children speak to are, in fact, their family members.

The First Lady was assured that basic needs––such as food and bathing––are taken care of from the moment the children arrive at the facility.

A Trump administration official assured the press that the children are entrusted to professionals who've created a "safe and happy environment" as CNN reported of the First Lady's visit:

An administration official briefing the press before the visit said most children at an HHS-funded and regulated facility such as this one remain there for approximately 58 days, receiving medical, dental, vision and psychological care, as well as what the official described as the ability to be inside a "safe and happy environment."

The official emphasized the predominant mission at this stage of the process for unaccompanied children, is to place them back with appropriate sponsors. Those sponsors can be their parents, if the parents are not involved in the judicial or criminal process or they can be other approved family members already living inside the United States.

Speaking to CNN reporters, the First Lady's spokeswoman, Stephanie Grisham, stressed that the First Lady "wanted to see as close to what she had been seeing on TV."

She wants to see a realistic view of what's happening," she added.

The First Lady is the first member of the Trump administration to travel to the U.S.-Mexico border. The visit was unannounced, hastily planned, and comes after her husband, President Donald Trump, under pressure from members of his own party, signed an executive order halting his administration’s “zero tolerance” family separations policy.

The president’s daughter, Ivanka, later thanked him profusely on Twitter, a move which opened her up to a volley of criticism from many who pointed out that she was congratulating her father for “taking critical action” on a policy he could have halted with a simple phone call, not to mention the fact that it was a crisis entirely of his own making.

Earlier this week, President Trump admitted that his administration’s policy of separating families was a negotiating tool to get Democrats to cave to his demands (which include tougher border security as well as a wall erected along the nation’s southern border).

The new executive order is unlikely to bring a definitive end to what activists say amounts to a humanitarian crisis on the U.S.-Mexico border, and the president indicated even before he signed the order that his administration maintains a hardline stance on immigration, even against those who are seeking asylum.

“We’re going to keep families together but we still have to maintain toughness or our country will be overrun by people, by crime, by all of the things that we don’t stand for and that we don’t want,” Trump said during a brief announcement at the White House.

Despite signing an order to end the “zero tolerance” policy, the president continued to use hardline immigration rhetoric while holding a campaign rally in Duluth, Minnesota.

“They’re not sending their finest. We’re sending them the hell back! That’s what we’re doing,” he told nearly 9,000 supporters. “And, by the way, today I signed an executive order. We will keep families together, but the border is going to be just as tough as it has been.”