McCain Emerging As Foil To Trump With Latest Defiant Move 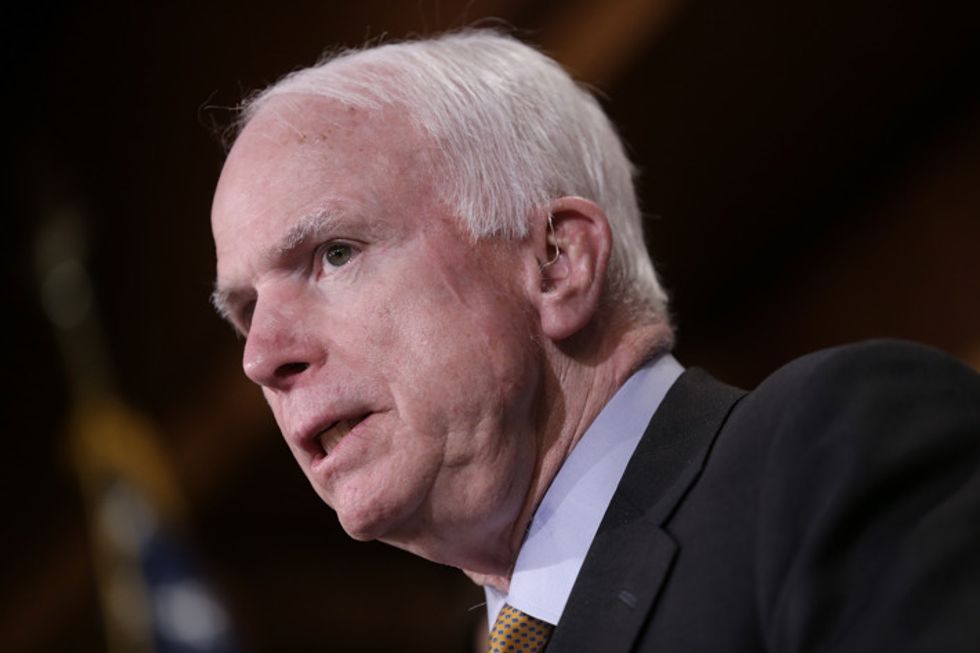 In a letter to Senate Majority Leader Mitch McConnell yesterday, four influential Democratic and GOP Senators made their case for a special investigation into foreign cyberwarfare, and an inquiry into the CIA's findings that Russia intentionally interfered in the 2016 presidential election to help President-elect Donald Trump win. Senator John McCain (R-Arizona) has led the call, amplifying the need for a special committee during appearances on Sunday news shows.

"This is serious business. If they're able to harm the electoral process, they may destroy democracy, which is based on free and fair elections," Sen. McCain told CNN's Jake Tapper on State of the Union. "This is the sign of a possible unraveling of the world order that was established after World War II, which has made one of the most peaceful periods in the history of the world." He further stressed that the American response to the election hacks has been "totally paralyzed" and that a committee is necessary to look at "the whole issue of cyber warfare, where we have no strategy or no policy" because it is "perhaps the only area where our adversaries have an advantage over us."

In their letter to Sen. McConnell, Sens. McCain, Lindsey Graham (R-South Carolina), Jack Reed (D-Rhode Island) and Chuck Schumer (D-New York) wrote that the recent hacks "should alarm every American. Cybersecurity is the ultimate cross-jurisdictional challenge, and we must take a comprehensive approach to meet this challenge effectively." A select committee would be responsible for a "top to bottom" review of Russian interference and would spearhead new cybersecurity legislation that would "address the gaps in our current statutory regime that governs our cyber laws."

Sen. Schumer explained why he chose to back a special investigation during his own press conference in New York. "We don’t want this investigation to be political, like the Benghazi investigation. We don’t want it to just be finger pointing at one person or another," he said.  “We want to find out what the Russians are doing to our political system and what other foreign governments might do to our political system, and then figure out a way to stop it. Only a select committee can do it.”

The senators have found themselves at odds with Sen. McConnell because though he has openly condemned Russian interference and backs a congressional investigation into the matter, he has recommended that the Senate Intelligence Committee, led by its chairman, Richard Burr (R-North Carolina) should handle the investigation. But, the senators argue, too many committees with the authority to investigate cybersecurity require one select panel to oversee them. (Currently, the Senate Armed Services Committee, Intelligence Committee, Judiciary Committee, Commerce Committee, and Homeland Security Committee all have some jurisdiction over cybersecurity issues.)

Sens. McCain and Graham have both rebuked Trump's continued dismissal of the assessment from U.S. intelligence that it was confident that Russia was behind the hacks,

a belief he expounded upon in an interview with TIME, in which he suggested that the conclusion of Russian interference was politically motivated:

Trump’s statements continued to raise questions about Trump’s Russian ties and continued affinity for Moscow despite the concerns of 17 intelligence agencies that Russian interference has heightened geopolitical tensions. Trump––and his aides––have continued to claim that the findings are an attempt to undermine the legitimacy of his victory. These claims have received sharp rebukes from both sides of the aisle, amid concerns that the president-elect would block inquiries from proceeding.

In an unclassified memo to top staffers on Friday, CIA Director John Brennan said FBI Director James Comey and Director of National Intelligence James Clapper now both concur with the agency's findings. In response, Trump's incoming Chief of Staff, Reince Preibus, called on all three officials to publicly address their findings. "It sure would be nice to hear from everybody. I mean, if there is this conclusive opinion among all of these intelligence agencies, then they should issue a report or they should stand in front of a camera and make the case," Priebus said.