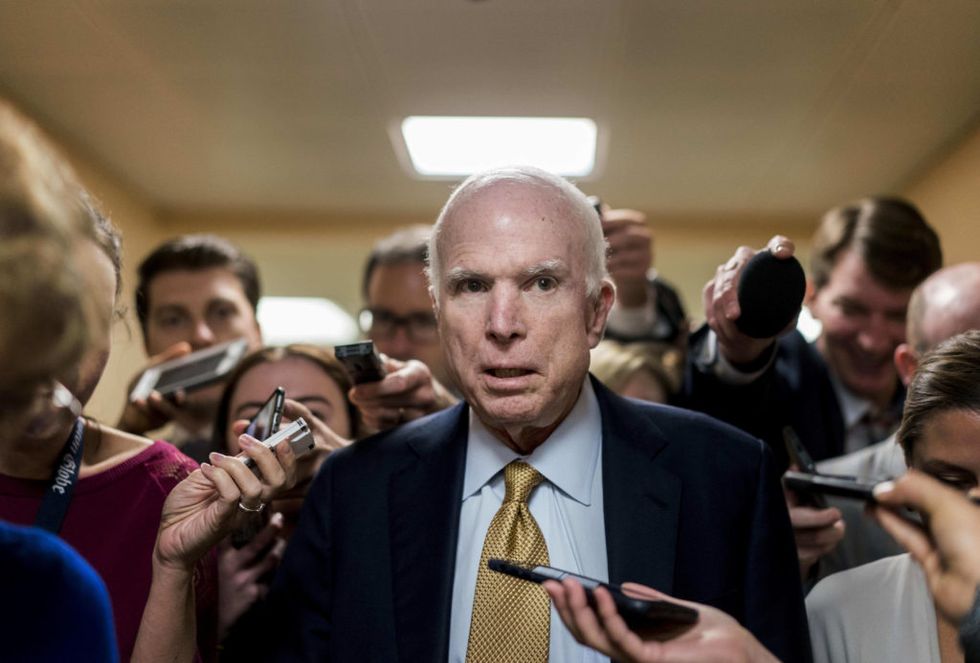 Senator John McCain (R-AZ) blamed Saturday's chemical attack in Syria on President Donald Trump's desire to withdraw U.S. troops from the civil war-torn country. “I want to get out," Trump said in a press conference last Tuesday. "I want to bring our troops back home."

“President Trump last week signaled to the world that the United States would prematurely withdraw from Syria," McCain wrote in a statement. "Bashar Assad and his Russian and Iranian backers have heard him, and emboldened by American inaction, Assad has reportedly launched another chemical attack against innocent men, women, and children."

To be sure, President Trump inherited bad options after years of inaction by his predecessor in Syria. History will render a bitter judgment on America for that failure. But no one should believe we are out of options. We can and should change course – starting with a comprehensive strategy that lays out clear objectives for our mission there. It's not too late to stop Assad's impunity and begin to rewrite this terrible chapter in our history.

At least 42 people suffocated to death when Syrian President Bashar Al-Assad allegedly released a chemical nerve agent in rebel-held Douma, Syria, which is an eastern suburb of Damascus, the country's capital.

“The Assad regime and its backers must be held accountable, and any further attacks prevented immediately,” Heather Nauert, a State Department spokeswoman, said in a statement. “The United States calls on Russia to end this unmitigated support immediately and work with the international community to prevent further, barbaric chemical weapons attacks."

Early Sunday morning, Trump blasted Russia and Iran for backing Al-Assad, tweeting that their support will come with a "big price."

Officials in Moscow and Tehran claimed the idea that Assad had used chemical weapons were "bogus."

“The spread of bogus stories about the use of chlorine and other poisonous substances by government forces continues,” the Russian Foreign Ministry said in a statement. “The aim of such deceitful speculation, lacking any kind of grounding, is to shield terrorists,” it added, “and to attempt to justify possible external uses of force.”

The president then blamed former President Barack Obama for the chemical attack in Syria. "Animal Assad would have been history," he wrote, "if President Obama had crossed his stated Red Line In The Sand."

Syria, which has been decimated by civil war for more than seven years, has lost half its population of 24 million due to the displacement of its people. As many as half a million Syrians have been killed in the ongoing internal conflict. Syrian refugees have inundated central Europe, contributing to a surge of nationalism and placing a strain on available resources.