Matt Drudge Returned to Twitter With a Scathing Attack on Fox News Over a Questionable Segment They Aired, and Fox Just Responded 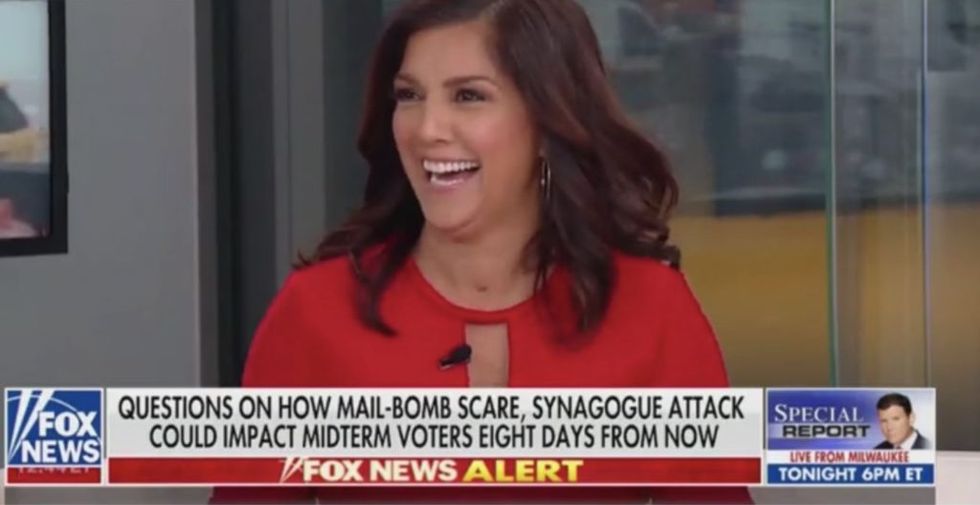 Conservative media guru Matt Drudge made a bombastic return to Twitter on Monday by blasting Fox News for its coverage of last week's slew of attempted bombings and the mass shooting at a Pittsburgh synagogue over the weekend.

In a scathing tweet, Drudge knocked Fox's Outnumbered for politicizing the hate-fueled tragedies that have left the nation reeling.

"A segment on Fox News this morning where hosts laughed and joked their way through a discussion on political [sic] impact of terror was bizarre," The Drudge Report founder wrote. "Not even 48 hours since blood flowed at synagogue [sic]? Check your soul in the makeup chair!"

Perhaps it's Drudge's Jewish background that inspired him to call out Fox for its callous politicization of hate crimes.

@DRUDGE @JohnJHarwood @DRUDGE just realized his synagogue could be next. Apparently so did @benshapiro and several… https://t.co/ZOnyeer5A7
— I am not Spartacus (@I am not Spartacus) 1540834352.0

@DRUDGE Oh Matt you only care because it was Jewish folk that where killed if they were Hispanic or black you would… https://t.co/mhEeVQHM0V
— Jimmy Mac (@Jimmy Mac) 1540841789.0

Drudge also shared screengrabs of pundits jovially discussing whether last week's events would have an impact on the November midterms.

The ticker at the bottom of the screen was its own source of Drudge's anger as well.

Followers didn't spare Fox or Drudge from their own frustrations. Drudge helped shape this narrative, some said, and now he has to own it.

@DRUDGE Fox is state propaganda which spews the kind of right wing hate that led to the massacre. What else do you… https://t.co/kA9mrjerDi
— Andrew (@Andrew) 1540832672.0

@DRUDGE It is clear to me that Fox News is more concerned that people supposedly cannot say “Merry Christmas” than… https://t.co/HNndFgvtHc
— Russell Drew (@Russell Drew) 1540834650.0

@RussOnPolitics @DRUDGE They did the same thing with Dylann Roof after shooting up a Black church. FOX actually wro… https://t.co/cAGbVua7zS
— Day One Glitch (@Day One Glitch) 1540844317.0

"Kennedy made an unrelated quip at the end of the segment which was focused on unity," a Fox spokesperson told The Washington Examiner in a statement. "There was absolutely no joking or laughing about the events of this weekend and a screen grab of her smiling is hardly indicative of the entire segment."

In its rebuttal, Fox did concede that the chyron was inappropriate: "The lower third should not have been up for the duration of this segment as it was not fully reflective of what the panelists were discussing."

Drudge, who periodically deletes his archived tweets, has had a turbulent relationship with social media. "I've got that little Twitter thing," he said in 2015, but "even that's kind of disgusting."

"To this day, Drudge's Twitter account is often left blank with only a default message telling his 522,000 followers that "@Drudge hasn't Tweeted,'" the report said. "When he does tweet, the message stays up for just 24 hours before vanishing."

In 2014, after he erased his past tweets, Drudge explained why he did it: "In this maniac Digital Age … it's vital … to clear your mind … constantly." He later tweeted "self-quarantine" before deleting his tweets again.

When he returned to Twitter last year, his page took on a new retro look, which Drudge felt was indicative of the times.

"We have clearly entered a historic era," he told Axios. "It's feeling like the Roaring 20's this autumn with tech valuations at such hysterical heights. The socials, like Instagram Live, are alive with the spirit of Warhol. The sound of the atom splitting is looming over Korea. What's old is new. So, black and white and read all over!"

Thus, Drudge is likely unconcerned with his followers' frustration over his criticism of Fox.