This English Mayor Just Declared Donald Trump 'Banned' From His City, and Now Trump Has a New Nickname 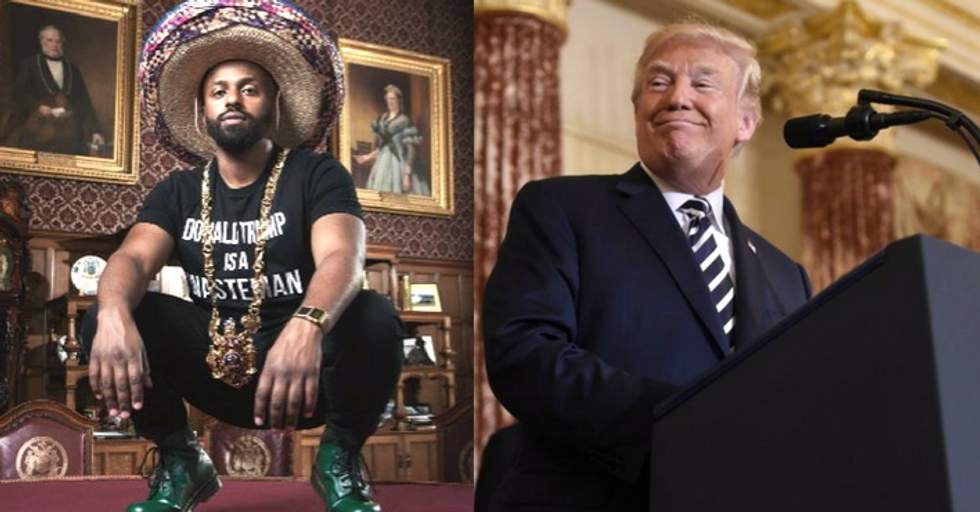 President Donald Trump is scheduled to make his first official visit as president to the United Kingdom on July 13. The trip comes after he attends a meeting in Brussels, Belgium, for the North Atlantic Treaty Organization (NATO), the military alliance of European and North American democracies founded after World War II.

But there's already one U.K. city not rolling out the welcome mat for the president. The Lord Mayor of Sheffield, England, declared Trump persona non grata on Twitter Wednesday, July 4.

Lord Mayor Magid Magid, an elected City Councillor and member of the Green Party, also declared the day of the president's visit "Mexico Solidarity Day." The Green Party Councillor appears in a photo with the tweet wearing a sombrero and a t-shirt that reads "DONALD TRUMP IS A WASTEMAN."

Wasteman is a bit of British slang. According to the multiple definitions on Urban Dictionary, Wasteman is a noun, an insult meaning:

A man, who doesn't act his age... with a complete disrespect for women… someone who does nothin’ with their life (or nothing much)... A boy that is worthless and has no reason to be living, can also be very stupid and selfcentered [sic]...You don’t even want to be near them."

In addition to his tweet of declaration, the Lord Mayor added two lists to his post. The first covered "5 Reasons (of thousands) Why Donald Trump Is a WASTEMAN!". It includes Trump's Muslim ban, Paris Climate Accord withdrawal, moving the U.S. embassy to Jerusalem, family separations by DHS and ICE and his reactions to activities by known White supremacist groups.

The second lists "5 things we can do to beat Donald Trump." The list includes demonstrating, working with organizations opposing Trump's policies, looking out for the targets of Trump's rally rhetoric, showing solidarity with organizations targeted like Planned Parenthood and contacting elected officials.

Magid, also known as Magid Mah, is a British-Somali activist and politician. His appointment as Lord Mayor marks him as the first Somali, the youngest at 29 and the first Green Party councillor to hold the ceremonial title.

Magid, who studied aquatic zoology at the University of Hull, was elected to the Sheffield city council in 2016. Before becoming a city councillor he worked in digital marketing.

Magid was born in 1989 in Burao, a city in northern Somalia. The Somali Civil War took over the entire country at roughly the same time as his birth. Magid's mother and five siblings left Somalia in 1994 "to find a better life" and spent 6 months in a refugee camp in Ethiopia before being admitted to Britain.

It's understandable why the Lord Mayor would advocate for asylum seekers around the world and take exception to President Trump.

Magid is planning a "bit of a fiesta" as a Mexico solidarity event in the northern English city of Sheffield on July 13.

While Magid has the accompanying government powers that stem from his position as an elected city councillor, his title of Lord Mayor is ceremonial only. So his Trump ban is purely symbolic.

The position of Lord Mayor of Sheffield dates back to 1843. A new Lord Mayor is selected by the city council each year from among their own ranks. The current and 122nd Lord Mayor, Magid Magid, was selected in May of 2018.

Reaction to Magid's Sheffield ban on Trump is mixed.

"Of course I don't expect everybody to agree with everything I say but the majority of it has been quite positive," he said, but some racist abuse and threats have occurred too. To those comments, Magid responded,

Despite some support from like minded Britains, Trump's July 13 visit is expected to be met in London, a place Trump insulted several times while sparring with London Mayor Sadiq Khan on Twitter, by mass protests and one giant baby Trump blimp. Lord Mayor Magid plans to head to London himself after his fiesta and join the Stop Trump demonstration.

The president has meetings scheduled with Prime Minister Theresa May and Queen Elizabeth II. And the Sheffield City Councillor takes exception to the idea.

"We should still engage with him, by all means. But we shouldn't allow him in the country," Magid said.

Everything he stands for and does is something we completely don't stand for as a country. We need to be a bit bolder."

By putting out a massive red carpet for him, we're legitimizing everything he stands for and that's something we can't tolerate."

"[Theresa May is] embarrassing the whole country [by] forcing the Queen to shake his small hand," the Lord Mayor added.

Trump's next stop is Helsinki for a one-on-one, closed door meeting with Russian President Vladimir Putin.