Lindsey Graham Just Blasted Donald Trump's Claim That Russia and Iran Are Unhappy He's Pulling Out of Syria, and We Can't Look Away 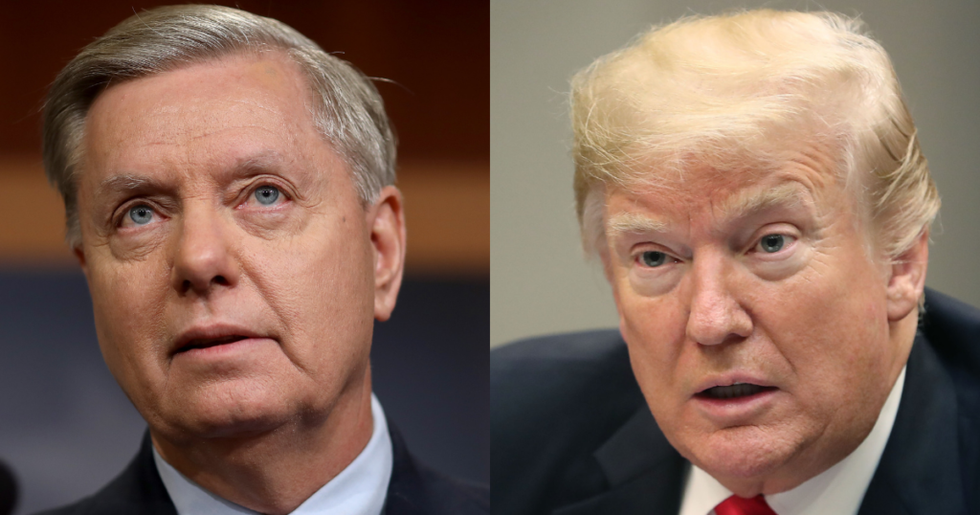 "Russia, Iran, Syria & many others are not happy about the U.S. leaving, despite what the Fake News says," Trump tweeted Thursday morning, "because now they will have to fight ISIS and others, who they hate, without us. I am building by far the most powerful military in the world. ISIS hits us they are doomed!"

"It is not FAKE NEWS that Russia, Iran, and Assad are unhappy about our decision to withdraw from Syria," Graham wrote. "They are ECSTATIC!"

It is not FAKE NEWS that Russia, Iran, and Assad are unhappy about our decision to withdraw from Syria. They are E… https://t.co/05dEqyd4KN
— Lindsey Graham (@Lindsey Graham) 1545316083.0

In a second tweet, Graham warned against Trump's orders, which "outsource the fight to Russia, Iran, and [Syrian President Bashar al] Assad," who "do not have America's best interests at heart."

“On this, Donald is right. I agree with him," Putin said. “If the United States decided to withdraw its force, then this would be right."

Many people fired back at Graham for not having done more to manage Trump's recklessness.

Putin referring to Trump by his first name - something Trump hates and is a sign of dominance - shows who is really running the show.

@Acosta This makes a lot of sense...Donald is Putin’s puppet and he will do anything his master orders him to do, a… https://t.co/DDgB0AiGNO
— Robert Rodriguez (@Robert Rodriguez) 1545316884.0

Trump stunned the political world Wednesday when he announced the withdrawal of American troops from war-torn Syria on Twitter and declaring victory over ISIS.

"We have defeated ISIS in Syria," the president tweeted, "my only reason for being there during the Trump Presidency."

On Thursday, Trump defended his decision to pull out of Syria, noting that he campaigned on ending American entanglements in the Middle East (he did, but he has no actual plan to ensure the stability of Syria or the safety of our Kurdish allies).

"Getting out of Syria was no surprise," Trump tweeted. "I’ve been campaigning on it for years, and six months ago, when I very publicly wanted to do it, I agreed to stay longer. Russia, Iran, Syria & others are the local enemy of ISIS. We were doing there [sic] work. Time to come home & rebuild."