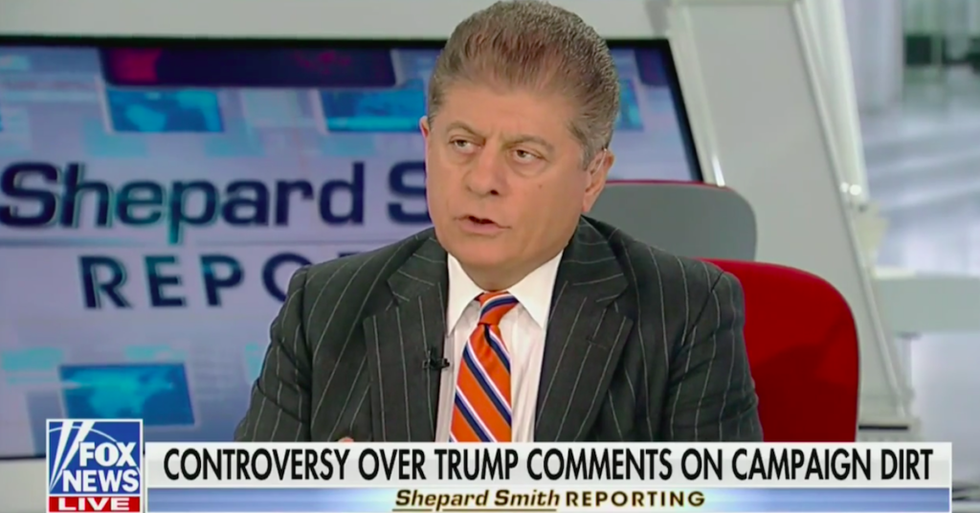 In an appearance on Fox News with Shepard Smith, Fox legal analyst Judge Andrew Napolitano first commented on Hatch Act violations by Kellyanne Conway. Smith then asked him to weigh in on President Donald Trump's admission that he would accept foreign interference in the 2020 Presidential election.

Smith asked about any gray areas or wiggle room for the President when it comes to accepting and neglecting to report foreign aid for his 2020 campaign as he did in 2016.

"There’s no wiggle room with respect to dirt. With respect to opposition research. The Federal Election Commission decided in other cases that that is a thing of value."

When Smith asked if the President's remarks during a recent ABC News interview constituted describing a felony offense, Napolitano replied:

Despite Trump saying there was no harm in listening and he would only contact the FBI if he thought something was wrong—then backtracking to say the FBI was too busy and in real life people do not call the FBI—Napolitano maintained the President is misinformed.

"If he is a candidate, then what he receives is regulated by federal laws that he took an oath to uphold. Among them are you cannot take something, accept something, receive something from a foreign national under the guise of being the head of state or because you want to use it for your campaign."

Responding to news that Senate Democrats proposed legislation specifically requiring notification of the FBI after any contact, Napolitano said:

"The president told George Stephanopoulos the FBI director is wrong. Such a statute would clarify this and impose upon the president—whoever that may be—more of a burden to enforce these laws on him or herself as well as on anybody else running for office."

Smith then asked the judge for his initial reaction when he heard Trump's interview remarks to ABC News. The judge stated:

"The president of the United States of America is prepared to commit a felony to get re-elected. That was my reaction and it was not a happy one. I thought he shot himself in the foot. I wish he didn’t say it." People were less than surprised by both Trump's admission and Napolitano's assessment.

Although one person had a logical reason for why the Constitutional oath Trump took did not apply.

@thedailybeast I respect the judge. But he doesn't know that when Trump took the oath of office and swore to uphold… https://t.co/7XqsfB2plF
— Carl B in pensione (@Carl B in pensione) 1560482125.0

President Trump attempted to walk back his comments to ABC News on Twitter Thursday by claiming he referred to routine foreign relations meetings with people like the "Prince of Whales." Trump has yet to respond to the latest round of criticism.