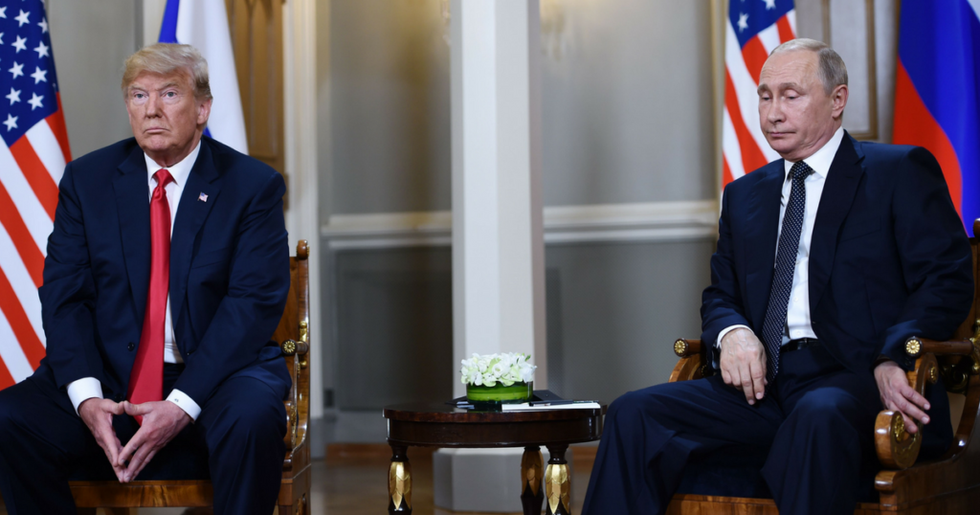 U.S. Ambassador to Russia Jon Huntsman said Monday's meeting between President Donald Trump and Russian President Vladimir Putin isn't a "summit" because it's the first time the two leaders are having a private conversation.

Trump tweeted on Sunday he was "looking forward" to meeting Putin and "no matter how well I do at the summit," it won't be good enough for his critics.

The president then referred to the media as "the enemy of the people" and blamed Democrats for obstructing his agenda.

Huntsman was asked by Chuck Todd on Meet the Press why the "meeting" doesn't qualify as a summit. "This isn't a summit," Huntsman replied. "It's a meeting."

The ambassador recounted instances in which Trump and Putin had met in the past but emphasized that Monday's meeting is the "first time for both presidents to actually sit across the table and have a conversation."

Todd then questioned if Huntsman hesitates to use the word "summit" because "we don't have an agenda" or "deliverables," referencing previous comments by Huntsman indicating both items are necessary for a summit.

Huntsman explained there is "no state dinner, no joint statement, no deliverables that are gonna be pre-packaged."

"You don't know what's going to come out of this meeting."

Huntsman added that the two leaders sitting down together is a start to a dialogue, which will include discussions about "meddling in the election" and issues in which "we have some shared interests."

"You gotta remember that Russia is a country of 11 time zones. It touches Asia, it touches the Middle East, it touches western Europe," Huntsman said. "It's inconceivable that we can solve some of the international issues without engaging Russia on some level."

Huntsman noted there is "no trust in the relationship" between the United States and Russia and Monday's meeting is an attempt to "diffuse" and "take some of the danger" out of the relationship.

In a late Sunday night tweet, Trump said "our relationship with Russia has never been worse," blaming Special Counsel Robert Mueller's investigation into Russian interference in the 2016 presidential election. Trump habitually refers to the probe as a "rigged witch hunt."

Our relationship with Russia has NEVER been worse thanks to many years of U.S. foolishness and stupidity and now, the Rigged Witch Hunt!
— Donald J. Trump (@Donald J. Trump) 1531721129.0

In a press conference following the closed-door meeting between the two leaders, Trump accepted Putin's assurance that Russia didn't meddle in our election. "I don't see any reason why it would be Russia," the president said.

Trump said he and Putin "spent a great deal of time" discussing election interference and that overall their meeting "went very well."

Our relationship has never been worse than it is now. However, that changed, as of about four hours ago.

Clearly Trump has no interest in defending our country against the foreign adversary who installed him: “I think we… https://t.co/xAcLeQVC8R
— Amy Siskind 🏳️‍🌈 (@Amy Siskind 🏳️‍🌈) 1531745276.0

As Huntsman had predicted, the two leaders did not announce formal agreements on any pressing diplomatic matters. Both, however, denied Russia's involvement in election hacking despite unanimous agreement among American intelligence agencies and scores of indictments against Russian operatives and companies involved with the attack.