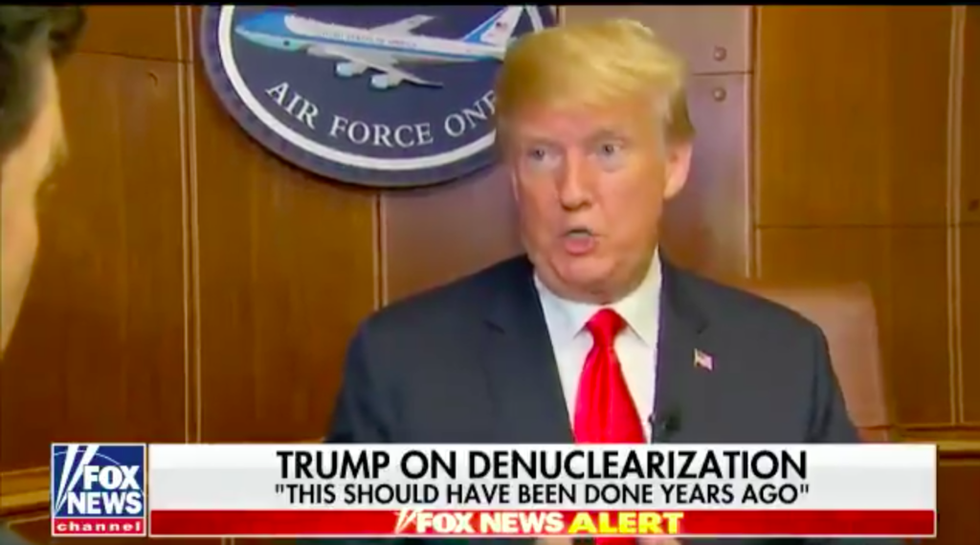 “He’s a tough guy. Hey, when you take over a country, tough country, tough people, and you take it over from your father, I don’t care who you are, what you are, how much of an advantage you have, if you could do that at 27 years old, I mean, that’s one in 10,000 that could do that,” Trump told Fox News’ Bret Baier. “So he’s a very smart guy, he’s a great negotiator, but I think we understand each other.”

The president's comments are particularly alarming when one considers Kim's human rights record, which is widely considered the worst in the world. The North Korean representative's human rights abuses are lengthy and include torturing, starving, and killing his own people and charges of indefinite detention.

The president also addressed Baier's concerns that he had offered North Korea several concessions, including the cessation of military-preparedness training with the South Koreans and the possible removal of U.S. troops from the Korean Peninsula. The president's critics allege that these concessions––diminished American influence on the penninsula––are precisely what China wants.

To that, Trump said that the Chinese have been "very helpful":

No, I think China would really like to see no nuclear weapons, you want to know the truth, because look, whether you’re semi-friendly with a nation or not, when they have nuclear weapons and you’re that close, that can’t be a positive feeling. t just can’t be. So China’s been very helpful. I think over the last two months, maybe less so. I think the border got a little more open. Now, it didn’t affect today’s negotiation, but I think the border opened up a little bit more because China could be a little bit upset about trade because we’re very strongly clamping down on trade.

The president said he has "a very strong relationship" with President Xi Jingping of China and noted that Xi had been appointed president for life.

The president's statement mirrors one he made at a rally in March, in which he praised leader of the Chinese Communist Party, who had his political thoughts written into the party and state constitutions, and effectively abolished term limits for the presidency. (“He’s now president for life,” Trump said at the time. “President for life. No, he’s great. And look, he was able to do that. I think it’s great. Maybe we’ll have to give that a shot some day.”)

The Fox News interview continued with President Trump once again praising authoritarian leaders, this time addressing his relationship with Vladimir Putin and his call for Russia to be readmitted into the G7 summit.

"I’m not for Russia, I’m for the United States," the president insisted.

The interview is the latest gaffe in one of the strangest weeks for international diplomacy. Earlier yesterday, the president came under fire for screening a film which appears to exalt Kim.

“Of those alive today, only a small number will leave a lasting impact,” the narrator says near the video’s start, as shots of Trump, Kim and North Korean pageantry appear on the screen. “And only a very few will make decisions or take actions to renew their homeland, or change the course of history.”

The film progresses, showing images from the Korean War.

“The past doesn’t have to be the future,” the narrator says. “What if a people that share a common and rich heritage can find a common future?”

The video proceeds into a montage of destruction from the conflict before giving way to what The Washington Post refers to as a “science-fiction like version North Korea,” in which “crane-dotted skylines, crowded highways, computerized factories and drones” signal what the country could become should Kim choose to forge positive relations with the United States.

“You can have medical breakthroughs, an abundance of resources, innovative technology and new discoveries,” the narrator continues, before concluding, in pure Hollywood movie trailer fashion: “Featuring President Donald Trump and Chairman Kim Jong Un in a meeting to remake history.”

Reporters expressed disbelief and the president maintains that the film is an elevator pitch, similar to what he, during his time working in real estate, would have used to persuade potential investors to finance a hotel.