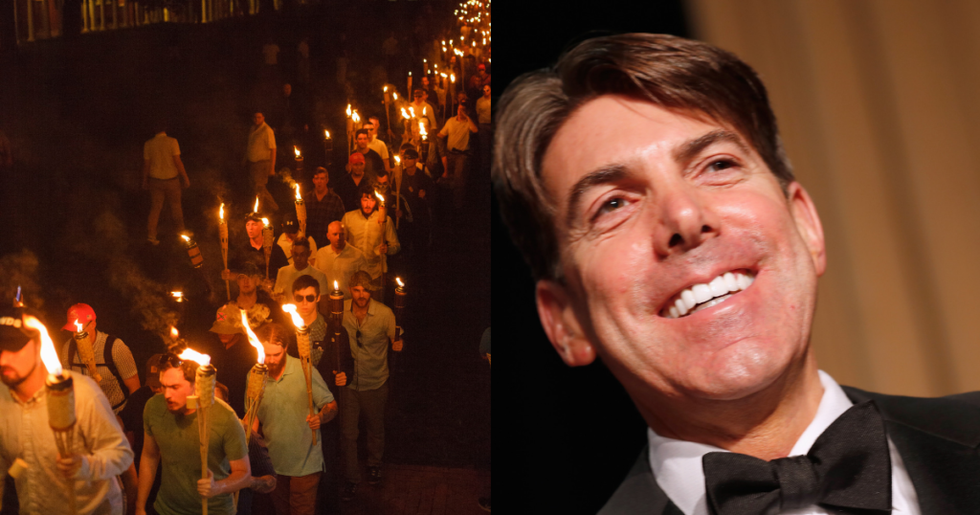 A Fox News correspondent told his colleagues that they sounded like a "white supremacist chatroom" while defending President Donald Trump's "very fine people" comments about the 2017 march in Charlottesville, according to leaked emails obtained by FTVLive.

An internal thread on Thursday between members of a Fox news team regarding former Vice President Joe Biden's 2020 candidacy sparked the tiff after Doug McKelway suggested that Biden was lying in his kickoff video about how Trump handled that now infamous rally.

“Very fine people on both sides?” Biden said, quoting Trump verbatim. “With those words the president of the United States assigned a moral equivalence between those spreading hate and those with the courage to stand against it. And in that moment, I knew the threat to this nation was unlike any I had ever seen in my lifetime.”

“A lie gets halfway around the world before the truth has a chance to get its pants on,” wrote McKelway, quoting Winston Churchill in response to Biden's words, implying that the Biden was misrepresenting or even lying about Trump's comments.

Editor Cory Derespina responded by claiming that a participant in the march, Jarrod Kuhn, insisted the event was to protest the removal of a statue of Confederate General Robert E. Lee.

It was this exchange that set Decker off.

“I don’t really understand the point you are making. Jarrod Kuhn was one of those individuals in Charlottesville holding a tiki torch while the mob chanted ‘Jews will not replace us.'"

“[Invoking] Churchill to what happened in Charlottesville is rather offensive,” Decker wrote. “Reminder: Churchill helped defeat the Nazis.”

Decker urged his colleagues to apologize.

“Based upon the slew of emails that I’ve received today, both of you ought to send an apology to your Fox colleagues –many of whom are hurt and infuriated by your respective posts," he said. “Your posts read like something you’d read on a White Supremacist chat room."

This was not the firs time McKelway's remarks have drawn scorn.

@aidnmclaughlin The length of that subject line is something out of a nightmare.
— Tyler Grant (@Tyler Grant) 1556288903.0

At least someone over there has integrity.

The email chain continued an hour later. McKelway shared a C-Ville article proving that a marcher he had interviewed, Brian Lambert, is a diehard white supremacist.

“It appears [Brian] Lambert revealed himself to be not the squeaky clean 1st amendment supporter he claimed to be on live TV,” McKelway confessed.

“So much for your Winston Churchill quote,” Decker fired back.