John McCain Gave An Inspiring Speech, Then Voted The Opposite Way 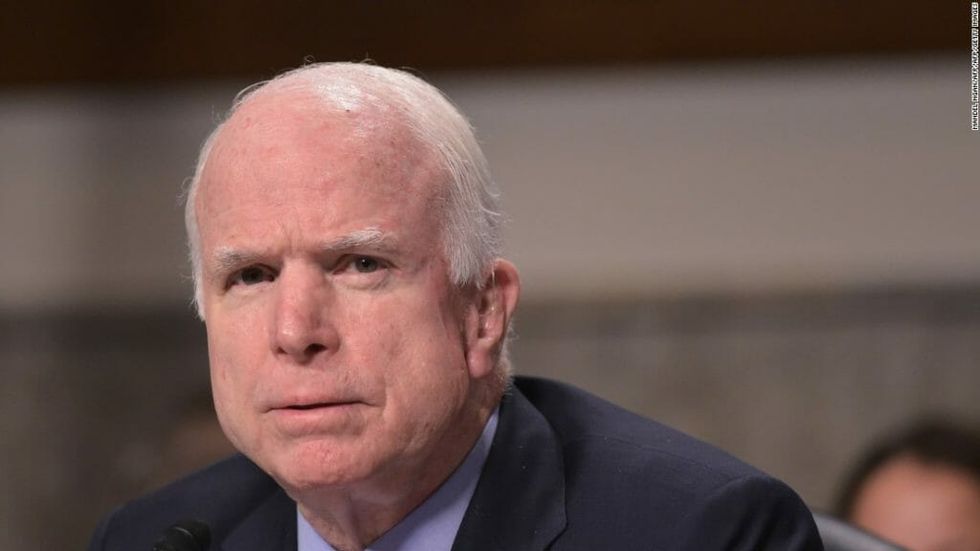 John McCain returned to the Senate floor to a standing ovation on Tuesday and after voting to proceed to debate on the Senate healthcare bill, gave a rousing speech, calling for a return to "regular order."

“Let’s trust each other. Let’s return to regular order. We’ve been spinning our wheels on too many important issues because we keep trying to find a way to win without help from across the aisle.

He called out the current Republican-led Senate for its failure to pass anything of substance, especially their inability to get anything done on healthcare.

“We’re getting nothing done. All we’ve really done this year is confirm Neil Gorsuch to the Supreme Court. Our healthcare insurance system is a mess. We all know it, those who support Obamacare and those who oppose it. Something has to be done. We Republicans have looked for a way to end it and replace it with something else without paying a terrible political price. We haven’t found it yet, and I’m not sure we will. All we’ve managed to do is make more popular a policy that wasn’t very popular when we started trying to get rid of it.

And then made a strong statement in opposition to the bill under consideration.

“I voted for the motion to proceed to allow debate to continue and amendments to be offered. I will not vote for the bill as it is today. It’s a shell of a bill right now. We all know that.

Some wondered if he was so opposed to the process and substance of the legislation why he voted to proceed to debate at all. His No vote could have killed it once and for all.

If McCain had voted no on the MTP, then McConnell might have been forced to return to regular order. But McCain voted yes.
— Chris Hayes (@Chris Hayes) 1501010361.0

But even more puzzling was McCain's vote later in the day on whether to advance the Senate's repeal and replace measure to a vote.

The motion, which required 60 votes, failed 43-57. 9 Republicans sided with Democrats against the motion, John McCain was not among them.

Later, McCain was asked why he voted Yes to proceed to a bill he fundamentally opposed.

McCain: "I just thought it would be good to move the process forward, and then we'll see what happens later on."
— Lissandra Villa (@Lissandra Villa) 1501033332.0

McCain seemed to send yet another contradictory message by reportedly telling Senator Murkowski, who voted against both motions up for a vote yesterday that she "did the right thing."

As McCain explained in his speech prior to the vote, there would have to be major changes made to the bill to get his support for final passage. More votes are expected today and later this week in an effort to make changes. In the meantime, McCain is keeping everyone guessing as to where he will fall on the final bill.