After Voting for the Senate Tax Bill, Republican Senator May Already Be Regretting It 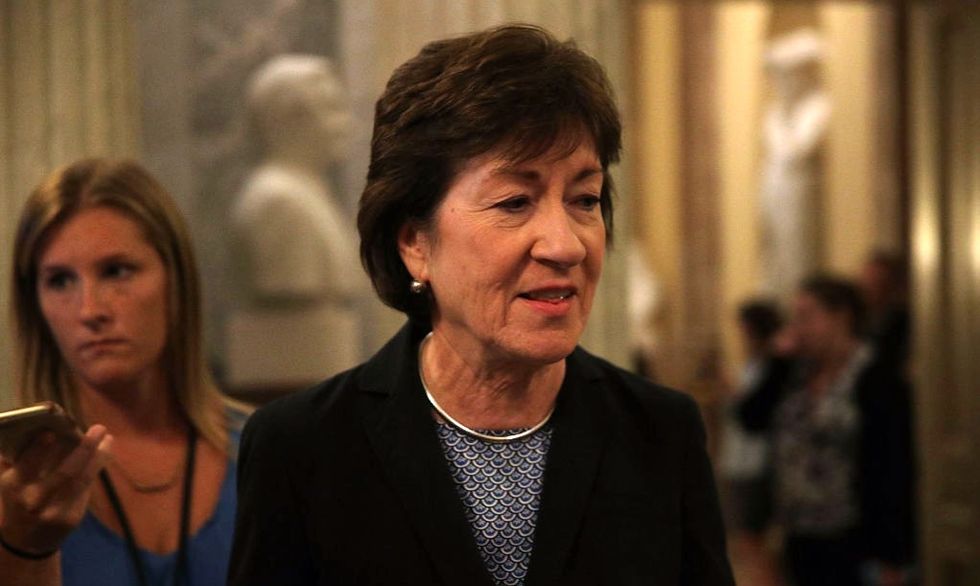 Maine's Republican senior Senator Susan Collins said Sunday there is no guarantee she will vote for Republican tax-reform legislation once it comes out of a conference committee with the House, despite her support of the Senate version.

“No, I mean obviously I want to see what comes out. I believe that the amendments I added on medical expense deductions, on property tax deductions, on helping retirement security for employees improve the bill," Collins said.

However House conservatives indicated they plan to block some of the key legislative promises Senate Republicans demanded in exchange for their votes on tax reform legislation, including Collins amendments.

The announcement was not well received in Maine based on the reactions to her post or the comments left by Facebook users marked as constituents. Over 10,000 negative reactions versus only about 1,000 positive ones by Tuesday morning and continued to get worse throughout the week.

Collins faced similar backlash on every post on her Facebook page after voting to support the bill. During a Facebook live event of the U.S. Senate Special Committee on Aging, which Collins chairs, the comments from her constituents focused on her support of the GOP backed tax reform bill and how it would hurt those she serves, especially working people and the elderly.

On Monday afternoon, demonstrators staged a sit-in at Collins Bangor, Maine office resulting in five arrests. The sit-in, which began Monday afternoon, followed other protests around Maine over the weekend in response to the Republican senator’s vote in favor of the bill that critics say is unfairly tilted toward the very wealthy and would increase the national debt and slash healthcare coverage for millions of Americans.

On Thursday a second sit-in occurred at Collins Portland, Maine office. Shortly after 8 p.m., police arrested a group of nine religious leaders protesting Collins’ support of the tax reform effort. Members of the group, which included several Protestant ministers, a rabbi and a Quaker minister, knelt and prayed before police handcuffed them. The group also prepared a joint video statement listing their reasons for denouncing the tax reform bill and Collins' support of it, calling the bill immoral and an act of injustice.

“This is not a stunt," the Rev. Allen Ewing-Merrill, a United Methodist minister who also serves as vice president of the Maine Council of Churches, said on Facebook live shortly before his arrest, "but it’s clear the senator is not ready to stand by a no vote (on the tax reform legislation).”

While none of us really wants to be arrested, it’s a pretty minor inconvenience when compared to how this bill is going to devastate peoples’ lives.”

Collins and other Republican senators expressed concern over the bill adding to the national debt. The Joint Committee on Taxation, a nonpartisan entity, reported last Thursday the Senate tax bill would add about $1 trillion to the deficit, even when factoring in economic growth.

Collins said she supported the bill only after receiving assurances the Senate will pass additional legislation mitigating the impact of the Obamacare mandate repeal embedded in the 500 page bill and another "ironclad" commitment there won't be cuts to Medicare and Medicaid. Those assurances were immediately negated when the bill was passed to the House however.

House Republicans made it clear they feel no compunction to support the deals made in the Senate to garner support from senators like Collins. They blamed Senate leaders for wheeling and dealing their way to a successful result on reforming the tax code to benefit more affluent Americans and corporate interests, which they said all Republicans should already support.

Given her home state's reaction to her vote and the House rejection of her deal, Senator Collins' vote, as well as those of other GOP senators, on a final tax reform bill is now far from assured. Collins'  senate term ends in 2020.