Trump's State Department Rescinded a 'Courage Award' From This Finnish Journalist After Her Anti-Trump Tweets, and Now She's Firing Back 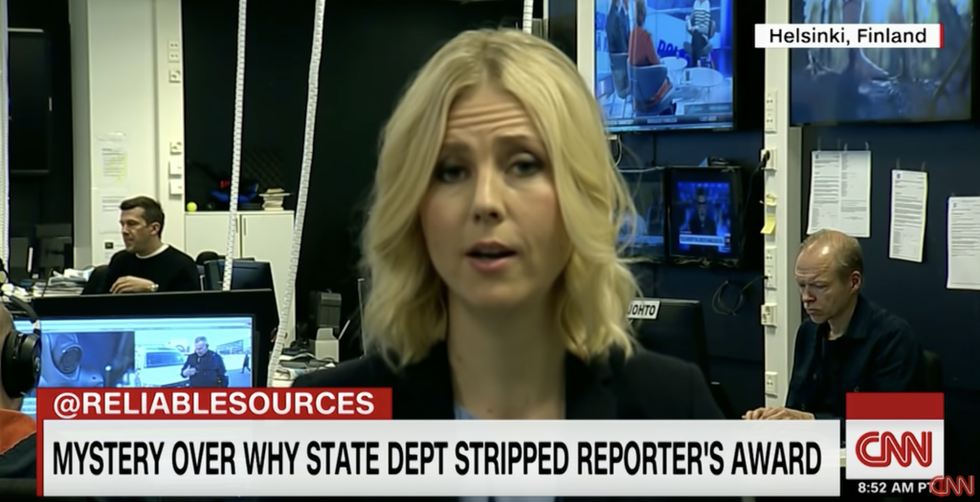 Finnish investigative journalist Jessikka Aro was thrilled to learn that she'd received the International Women of Courage Award. The award is granted annually by the U.S. Department of State to women who have demonstrated "exceptional courage and leadership in advocating for peace, justice, human rights, gender equality, and women’s empowerment."

Aro hmade arrangements for travel to the United States and gave the State Department her social media information.

Suddenly, she learned the award had been rescinded.

Aro says it's because of a critical tweet she posted of President Donald Trump.

When the President tweeted that the "RIGGED AND CORRUPT MEDIA" was "THE ENEMY OF THE PEOPLE," Aro fired back:

"The Kremlin doesn't need any troll factories as long as it has YOU trolling on behalf of it!"

Aro believes it was this tweet that resulted in her award being rescinded.

Watch her interview with CNN below.

Aro was originally awarded the honor for her work regarding Russia's propaganda efforts in the United States and Europe.

Though the award may have been rescinded, Twitter was certain to shower Aro with praise.

@JessikkaAro @realDonaldTrump Sad to hear you lost your courage award based upon this tweet. Quite ironic that no o… https://t.co/TdgrGhmoqJ
— TIG (@TIG) 1554706996.0

@JessikkaAro @realDonaldTrump Trump took something from you that any human being with a heartbeat knows is an award… https://t.co/zAmEe6Bf6K
— Sir Don 🇺🇸 (@Sir Don 🇺🇸) 1554726264.0

Despite his administration selecting Aro for the award, Trump has frequently lashed out against the press and against journalists of Aro's caliber.

With the President of the United States devoting so much time to decrying the media, it's no wonder why Aro had to display courage meriting the award—even though it was rescinded when she did something the President does on a daily basis.