Fox News Host Had a Highly Questionable Take on Christine Blasey Ford, and Mia Farrow Shut Him Down With One Simple Tweet 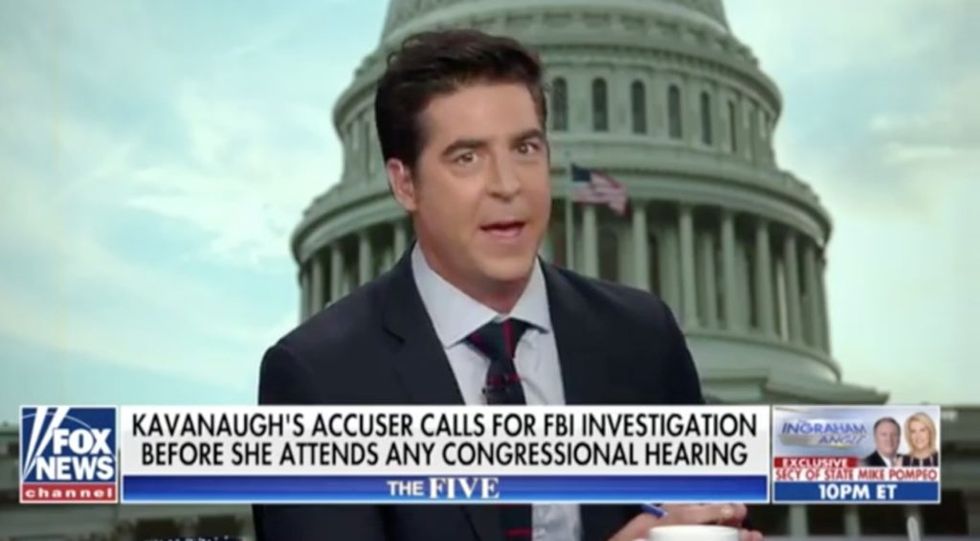 "I don't want to cast any doubt on her allegations," Watters told co-host Greg Gutfeld, "but the way they are dragging this out now it's become so political, Greg, that it's gotten away from the actual alleged crime. And now it's about the process and the nomination of this guy. She's not doing things-- the Democrats aren't doing things in a way that people would do if she was a true victim."

"If you go out and you say the first thing, you hear Kavanaugh's name, you call The Washington Post and then you call your congresswoman and then you call Dianne Feinstein and you say you don't want to come forward because you want to be anonymous but at the same time you take a polygraph test, and when they ask you how did you pay for the polygraph, you don't say how you paid for it... It's just way, way too suspicious to what's going on. I wanted to believe her. I still kind of believe she believes something happened but it doesn't sit right."

Watters' statements, which included claims that Dr. Ford's attorneys are in cahoots with the Clinton Foundation, Senator Dianne Feinstein (D-CA), and George Soros, prompted actress Mia Farrow to point out what many have pointed out about Dr. Ford's decision to come forward

@MiaFarrow Like he would know what a woman who has been sexually assaulted experiences. Especially when you are goi… https://t.co/lcZM4edq8p
— Michael Mullin (@Michael Mullin) 1537395516.0

@MiaFarrow Why would a person who is lying place a witness favourable to the attacker in the room at the time of th… https://t.co/H1S4YOl2NH
— JPaterson (@JPaterson) 1537409271.0

Although Watters joins the chorus of Republicans, particularly Senate Majority Leader Mitch McConnell, who've criticized the way Democrats have handled the allegations, many have pointed out that Dr. Ford did not, from the outset, want her name to become public knowledge.

In truth, Ford had sent a letter to Feinstein and anonymously tipped off the Washington Post back in July, but had requested that her identity remain a secret, citing fears of what publicity might mean for her and her family amid the task of having to rehash the assault in the public eye. Feinstein chose to honor Ford’s request for anonymity. Ford only came forward after The Intercept reported that Feinstein had a letter describing an incident involving Kavanaugh and a woman while they were in high school in her possession and was refusing to share it with her colleagues.

Attorneys for Dr. Ford are insisting that the FBI should investigate her allegation despite pushback from Republicans critics say are eager to confirm Kavanaugh to the nation’s highest court. Republicans have claimed that to initiate an investigation would significantly delay a vote which has already been postponed. This reasoning has already been shown to be faulty: The FBI investigation of Anita Hill’s allegations that Justice Clarence Thomas sexually harassed her when he was her supervisor at the United States Department of Education and the Equal Employment Opportunity Commission only took three days.

Hill and her landmark testimony have taken on a more cutting relevance in the wake of Dr. Ford's accusation and amid the rumbling #MeToo movement.

“The American public really is expecting something more,” she said in an interview on ABC’s “Good Morning America.”

“We are really under the impression that the Senate doesn’t take this seriously and doesn’t see this as part of their core responsibility,” she added.

“All of this is really something that I don’t think can be avoided if you really want to get to the truth, if that’s the purpose of this hearing,” Hill said, further noting that history could repeat itself with Kavanaugh and Blasey, “whether or not it is going to be anything more than just a sham proceeding so that the senators can say, ‘We gave her a chance to talk,’ and then move on to doing exactly what they were intending to do before she came forward.”

Unfortunately, President Donald Trump has stalled on calling for an FBI investigation.

Speaking to reporters, Trump said that it’s not up to the FBI to reopen the investigation and that the responsibility falls on the Senate.

“Well, it seems that the FBI really doesn’t do that … let the senators do it, they’re doing a very good job,” the president said.

Pres. Trump on the FBI investigating the Kavanaugh allegation: "Well, it seems that the FBI really doesn't do that… https://t.co/YK5OUHwJbE
— ABC News Politics (@ABC News Politics) 1537364469.0

This was quickly proven false by journalists and fact checkers.

On Tuesday, Trump said he remains “totally supportive” of Kavanaugh, and believes, although he hasn’t spoken with him personally about the accusation, that “he can handle himself better than anybody, he’s a very outstanding guy.”

Kavanaugh maintains his innocence, but has balked at speaking with the FBI. His longtime friend Mark Judge, whom Dr. Ford says was present during the attack, wrote a letter to the Senate Judiciary Committee in which he stated he has no intention of cooperating with the committee in any way.

“I did not ask to be involved in this matter nor did anyone ask me to be involved,” Judge wrote in the letter signed by his attorney yesterday.

Judge’s refusal has prompted calls for the FBI to issue a subpoena.