Mitch McConnell Just Changed the Rules Again for When a Supreme Court Justice Can Be Seated, and People Can't Even 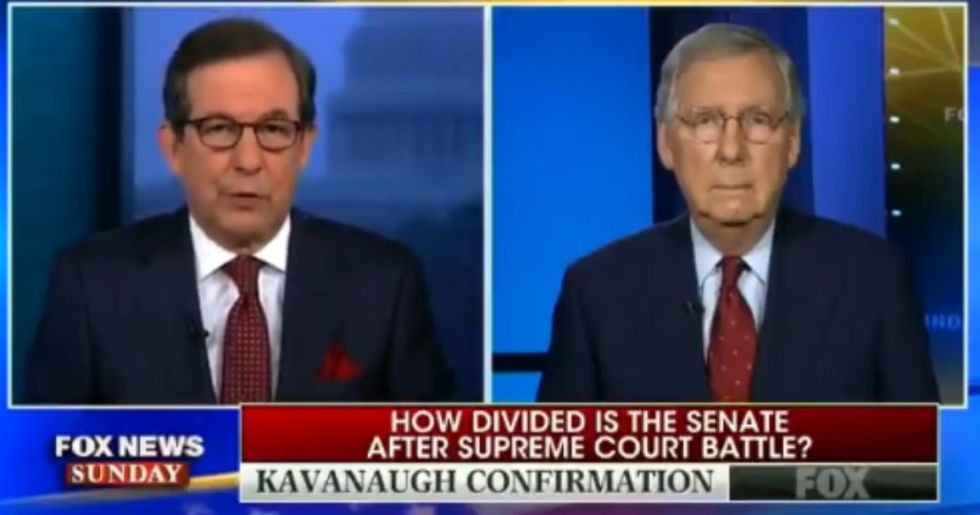 "We simply followed the tradition in America, which is that if you have a Senate of a different party than the President you don’t fill a vacancy created in a presidential [election] year," the Majority Leader said over the weekend.

That's a far cry from what he claimed two years ago.

“The American people should have a voice in the selection of their next Supreme Court Justice," McConnell said at the time. "Therefore, this vacancy should not be filled until we have a new President.”

McConnell changed his tune on Sunday. When asked by Wallace if he would uphold the rule he implemented two years ago, the 76-year-old Republican said: "we'll see if there's a vacancy in 2020."

McConnell claimed that not since 1880 has a Senate of a different party than the president confirmed a Supreme Court nominee.

McConnell reiterated this point on CBS's Face the Nation, but this time host John Dickerson noted that in 1956, a Democratic Senate confirmed William Brennan, who was nominated by Republican President Dwight Eisenhower, to the bench.

And in 1968, the Republican leader in the Senate allowed hearings to fill a Supreme Court vacancy under Democratic President Lyndon Johnson.

Dickerson's point was that McConnell was mischaracterizing history to fit his own agenda.

The American people remember exactly what happened in 2016.

Twitter users weren't surprised by McConnell once again changing the rules as he goes along.

@mattshuham Of course he will! Does anyone think that McConnell cares a whit about how callous he is?
— Andrew Ingino (@Andrew Ingino) 1538958463.0

Nor were they shocked over his hypocrisy.

Dickerson's pushback was much appreciated too.

@CBSNews @JustAGurLnSwedn @FaceTheNation John Dickerson did his homework and his job--unlike too many network news… https://t.co/81D9zqKsOn
— Joyce Tyler (@Joyce Tyler) 1538936578.0

One person summed it up nicely.

@CBSNews @FaceTheNation McConnell’s thinking is based on a fully disingenuous notion that a rare event can be defin… https://t.co/EscsfZp7uS
— Eggcredible (@Eggcredible) 1538938850.0

We're not buying it, Senator.