We Now Know How the European Commission President Got Donald Trump to Back Away From His Trade Threats, and People Are Torn 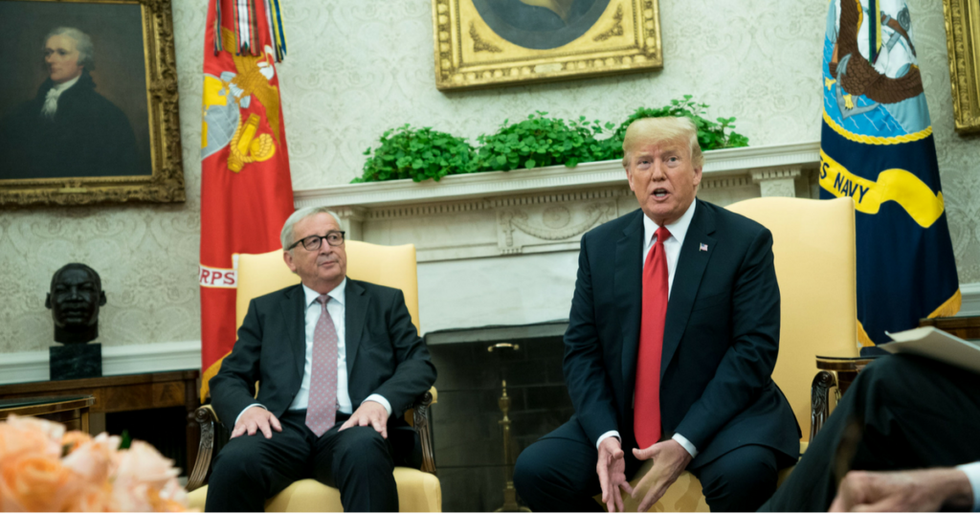 Today, the Wall Street Journal reported that Juncker used "a dozen colorful cue cards with simplified explainers" to navigate his way through negotiations with the 72-year-old president, who is notorious for failing to prepare for meetings or do his homework on complex global economic issues.

Juncker admitted he didn't know how the meeting with Trump would go, telling associates on his flight from Brussels when asked if he had any expectations: "No. We’ll have to see how it goes." One thing Juncker was prepared for, though, was the possibility of standing up to Trump. And boy, did he.

On the subject of tariffs, which Trump enacted this spring and which have disrupted trading markets and threatened to squeeze American and European economies, Juncker warned Trump to be smart about his next moves.

"If you want to be stupid," Juncker reportedly said to the president. "I can be stupid, as well."

Juncker then used "colorful cue cards" with "simplified explainers," an E.U. official told WSJ, each of which had at most "three figures about a specific topic, such as trade in cars or standards for medical devices."

The unnamed official acknowledged that expectations were low.

"We knew this wasn’t an academic seminar," the E.U. official said. "It had to be very simple."

Twitter savagely pounced on the news, laughing at the ridiculousness of Trump having to be treated like a grade-schooler.

But others were disturbed that this is what it's come to.

Juncker's approach seemed to have worked, as the two held an impromptu news conference after their meeting to announce concessions––that's right, concessions––Juncker was able to glean from Trump.

"Mr. Juncker stuck closely to the negotiating mandate handed to him by leaders of big E.U. countries including Germany, France, and the Netherlands," WSJ said. Germany has expressed its openness to abolishing tariffs and trade barriers with the United States, specifically on American-made cars.

France was "vehemently opposed to opening E.U. agricultural markets," according to those present for the discussions, which included U.S. Trade Representative Robert Lighthizer.

"Mr. Juncker told Mr. Trump and Mr. Lighthizer that any talk of including agriculture would kill prospects of a deal," sources said.

During the press conference, Trump said the E.U. had agreed to buy more American liquid natural gas, which is more expensive than Russian LNG because of the licenses and permits American companies are required to obtain. "The two sides agreed to negotiate license exemptions," WSJ specified.

As preparations for the unplanned press conference continued, Trump reportedly interrupted a meeting between Treasury Secretary Steven Mnuchin and Lighthizer, who were working on drafting a joint statement for Trump and Juncker.

"Suddenly Trump came out into our group and asked, ‘So, where are we now? Where is the statement?'" the EU official said. "We said, 'We haven’t seen it yet, because your people are still negotiating among themselves.'"

Trump and Juncker then announced that the United States had agreed to work toward ending tariffs with Germany and selling more LNG to the European Union.

Noting that he had gotten Trump to back down from his threats of additional trade penalties, Junker said: "We were never in a position to agree on these main elements before."

"We have a good personal relation," Juncker said of Trump, adding that he trusts the president to stick to what he promised.